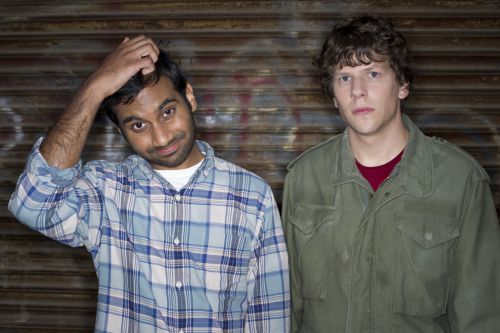 In the film, Nick (Eisenberg) is a small town pizza delivery guy whose mundane life collides with the big plans of two wannabe criminal masterminds (McBride and Nick Swardson). The lowlifes kidnap Nick and strap a time bomb to him – with the promise that they’ll blow him up unless he robs a bank. With only a few hours to pull off the impossible task, Nick enlists the help of his ex-best friend, Chet (Aziz Ansari). As the clock ticks, the two must deal with the police, hired assassins, flamethrowers, and their own tumultuous relationship.

“30 Minutes or Less” began the road to the screen when the original action-comedy screenplay landed on the prestigious Black List, an inside-Hollywood tally of the best unproduced screenplays. Director Ruben Fleischer says that everyone involved with the project was first lured by the inventive spark of the screenplay and story. “It had a really original voice,” says the director. “I was excited to read a movie that wasn’t a straightforward, predictable comedy – it was hard to know where this movie was going when I was reading it.

“The movie is an action comedy, but the subject is inherently dark, because of the premise of a guy getting a bomb strapped to his chest,” says Fleischer. “The comedy comes in how that situation affects the relationship between Nick and Chet. In turn, the action heightens the circumstances of the comedy. A really funny conversation in the midst of a car chase or a bank robbery takes it up a notch. Funny people elevate the material with everything they bring to the table.”

For the writers, the chance to find the humor in a very dark situation was irresistible. “It’s a life-or-death situation – these guys could get blown up,” says Michael Diliberti. “And into that, we put in our characters, two guys who really haven’t been living their lives to the fullest. What if two guys who really have nothing to live for had to put their lives on the line? We thought that idea was really ripe for comedy.”

For his part, Fleischer says he was attracted to the project by a unique combination of factors – not least of which are the story and the characters. “I hadn’t ever seen a story like this before, but more importantly, the characters were very specific – I’d never seen characters like Nick or Chet or Dwayne or Travis before,” Fleischer continues. “I thought these were the kind of roles that actors would love to play, and that proved to be true – Danny and Jesse and Nick and Aziz were all really excited about it.”

For Fleischer, casting those four main roles was key. “I feel like I have a good sense of casting, of finding the right people for the parts, then letting them shine and do what they do,” he says. When the cameras began to roll, playing the “double buddy” comedy roles would be Jesse Eisenberg as Nick, the pizza guy; Aziz Ansari as Chet, his estranged best friend; Danny McBride as Dwayne, a lowlife with big dreams and a poorly hatched plan; and Nick Swardson as Travis, the beta male to Dwayne’s alpha. 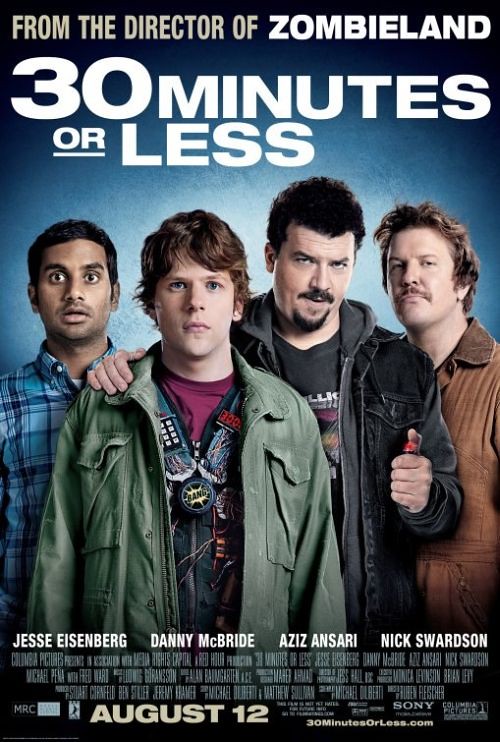 Opening soon across the Philippines, “30 Minutes or Less” is distributed by Columbia Pictures, local office of Sony Pictures Releasing International. Visit www.sonypictures.com.ph to see the latest trailers, get free downloads and play free movie games. Like then at www.Facebook.com/ColumbiaPicturesPH and join their fan contests.