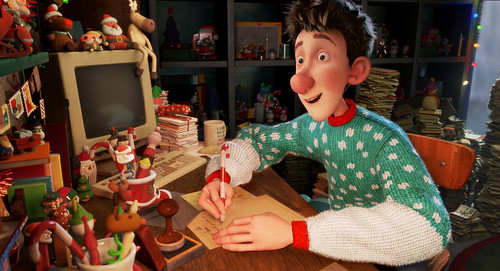 When we were younger, every Christmas we dreamed of meeting Santa Claus in person. We’d imagine what he really looks like and how he delivers those presents in that magical sleigh with those flying reindeers lead by the famous Rudolf the Red Nose Reindeer.

With the release of ARTHUR CHRISTMAS movie, you’ll be surprised how Santa Claus changed as he adopted to modern technology. I have to warn kids though that this is a different Christmas story and you might be shocked with the secrets revealed in this movie.

Aardman Production for Sony Pictures Animation finally reveals the incredible, never-before seen answer to every child’s question: ‘How does Santa deliver all those presents in one night?’ The answer: Santa’s exhilarating, ultra-high-tech operation hidden beneath the North Pole.

The movie, I must say, is not my typical Christmas movie but I did enjoyed watching it. The animation is good and it has the right amount of humor that kids and young-at-heart will surely enjoyed. I also shed a tear to some scenes because I am easily touched when it comes to family issues. Yes, the Santa family has dramas too. And in this movie, they are a dysfunctional family as well. Imagine the horror!

I also loved the Christmas Elfs because I didn’t expect them to be “geek’ and too cute. But the movie is actually about Arthur (voiced by James McAvoy), Santa Claus’ younger son who is too passionate about Christmas. He may be clumsy and full of fear (he doesn’t like heights) but he showed the true meaning of Christmas when Santa Claus (voiced by Jim Broadbent) accidentally failed to deliver one Christmas gift to a girl who wished to prove that Santa Claus do exist. For Arthur, no one should be left out. And that’s true. Because it hurts big time when you found out that you’re the only one who didn’t received a gift from Santa Claus.

Arthur’s mission then is to deliver the gift before Christmas morning dawns. And that’s where the adventure took off. 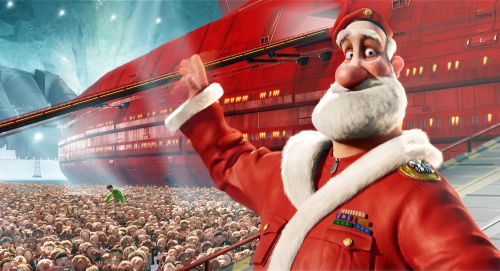 The movie also tackles how the good old Santa Claus delivering the presents by going down the chimney is changed with the new technology. Santa Claus’ eldest son, Steve (voiced by Hugh Laurie), who had big expectations of becoming next year’s Santa Claus, had created a better way of delivering the gifts but forgotten the true meaning of Christmas.

Also, giving fun to this movie is the older Santa (voiced by Bill Nighly), and Arthur’s Elf companion “Bryony” played by   Ashley Jensen.

The movie has a heart. And it’s intended to be seen by the whole family. Christmas, after all, is all about family and the joys you can bring to everyone. You will enjoy watching this in 3D because of the cool animation so better save up now because it will be shown early in the Philippines starting December 07.

Also, if you’re a Justin Bieber fanatic, you’ll be excited to see this movie even more because it also features a track from his Christmas album (which is available now under MCA Music Inc.).

You can watch Justin Bieber’s music video for “Santa Claus Is Coming To Town” in the big screen and in 3D format before the movie starts. I wont comment anymore about his version but Filipino fans will get to see it first because its actual premiere abroad will be on the 23rd of December. Lucky Filipino Beliebers, eh?

Beware the New Trailer of “Venom: Let There Be Carnage”