This post is divided into two: (1) Black Eyed Peas presscon and (2) coverage of their concert in SM Mall of Asia.

“They have a truckload of hits from four commercially and critically acclaimed albums. They are the Grammy’s pick for everything excellent for years on end. They have been on four consecutive world tours since 2004. They have reset the bar for excellent hip hop music and they continue to push the envelope even today.

They are the Black Eyed Peas and Manila, Philippines, home to one of their very own Apl.de.ap’s (Allan Pineda) familial lineage, had been specifically handpicked to be the much-coveted venue in all of Southeast Asia for this momentous musical event in the group’s history.” 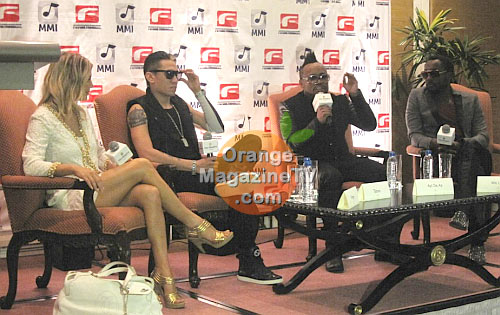 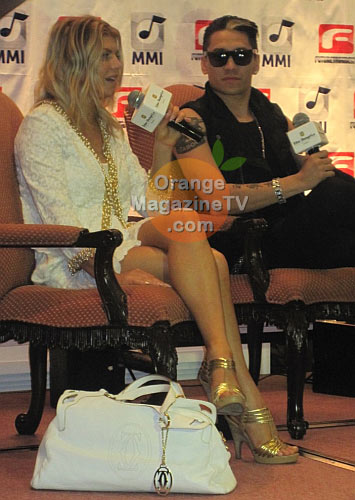 When asked what the Filipino fans can expect from the concert tomorrow, Fergie answered “I think you’re gonna see some nice ‘fashionology’ and that means fashion meets technology… A lot of our costumes light up which is amazing… They’re hard to put together. It takes a process so those are very special.” Apl.de.ap added “We took our time… a lot of costume changes, laser lights and of course I’m gonna sing some Tagalog songs. Bring your dancing shoes and we’re gonna be jumping around all night and having a good time.” 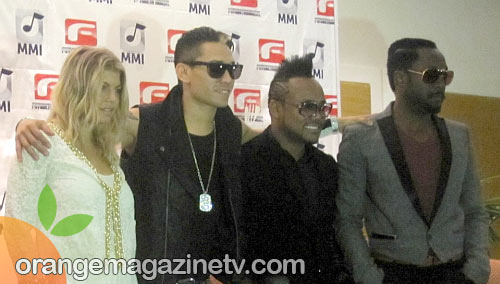 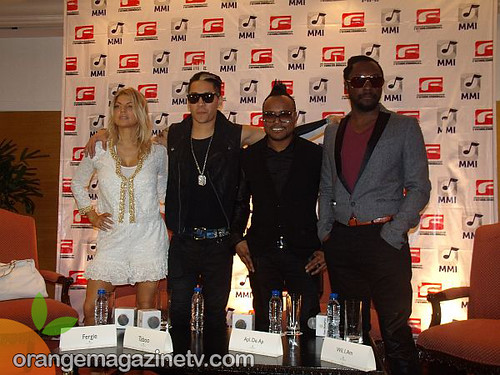 BEP’s one-night-only concert will happen tomorrow at the SM Mall of Asia concert grounds. They are expected to perform before a full capacity crowd at the huge venue. The biggest concert act of the year at the biggest concert venue is set to make history and you would not want to miss it.

The Black Eyed Peas presscon was covered by correspondent Karla Avila,  an Interior Design student of the University of the Philippines and blogs at  Kid at Heart  (http://karlaavila.tumblr.com/).

Here are videos from the presscon:

October 25, 2011 – It was a few minutes past 7pm before the biggest music event of the year and I couldn’t get more excited to see the Black Eyed Peas LIVE in concert – FINALLY! I have always loved their music. I may have a different reason for liking them (definitely not similar to why I love artists like Adele), but Black Eyed Peas has their own unique sound and cool style that resonate towards a wide audience.

I first met with our giveaway winner, Prince, pictured with me below as we gave him his Gold tickets to the concert (yes, he got an upgrade!). I can feel that he was so excited to watch the concert too. :) 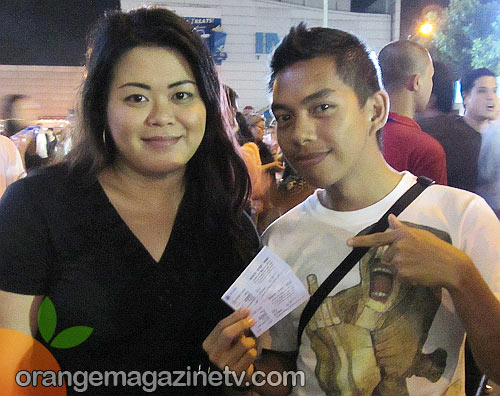 We went ahead to the VIP area and I’m just psyched that we were so close to the stage. This is me with my brother and correspondent Ken. 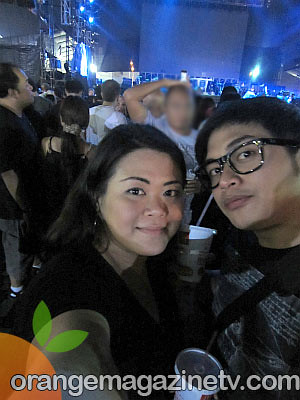 A few minutes passed and they made an announcement that the party’s about to start. They first thanked everyone who made it all possible. The Black Eyed Peas Live in Manila concert was produced by Futuretainment Inc. and Music Management International, with major sponsors Smart and San Miguel Oktoberfest Beer Festival, along with SM Mall of Asia, TV5, Cebu Pacific, Guess, McDonalds, AKTV, Crocs, and Samsung Smart TV. Orange Magazine TV was, of course, one of the media partners. :)

The front act for the night was all-Asian female group Blush. I honestly haven’t seen them perform yet, but I’ve heard some of their songs before, like “Undivided” and “Fell In Love With A Song”, which they performed for us live that night. They were good, but I was already too anxious to see Black Eyed Peas to enjoy their performances. :D 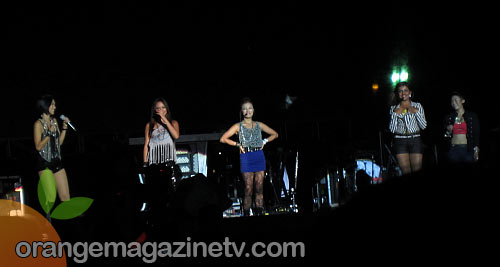 After Blush, the people at our area were getting impatient. I think we waited over 30 minutes before we started feeling the ground shaking with the beat of the bass. People started screaming with excitement as the song “Rock That Body” started playing. Suddenly, all the frustration from waiting faded away as will.i.am, Fergie, apl.de.ap and Taboo entered the stage. 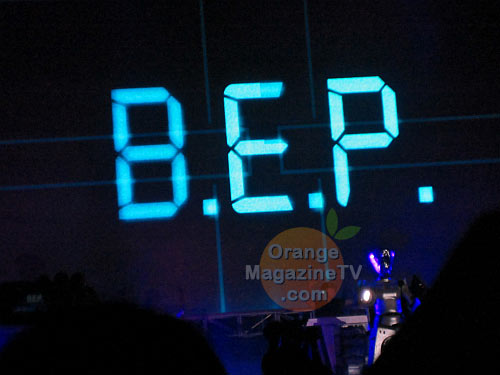 The Black Eyed Peas were all in black ensemble, with Fergie standing out from all the gold trimmings on her mini-dress. Ahhhh… they were worth the wait! :) 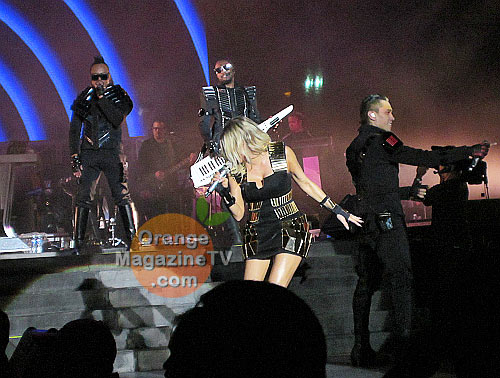 Throughout the show, each of them had solo time on stage. I think Fergie had the longest among the 4 and I don’t think anyone in the audience mind seeing her gorgeous bod performing right in front of us. I had a couple of close-up shots of her singing her lungs out. She even pauses to give us a chance to take photos of her. :D 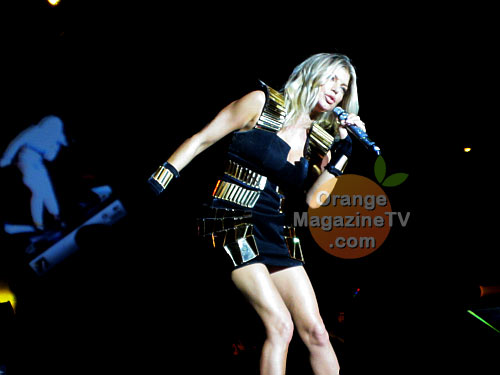 They performed “Just Can’t Get Enough” and “Meet Me Halfway“, then started rocking the party again with “Imma Be” and “Don’t Stop the Party“. 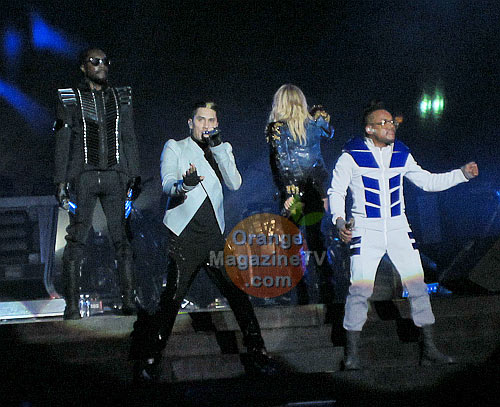 It was fun to watch as will.i.am try to speak in Filipino / Tagalog. He kept on singing “Gusto nyo ng party?” (Translation: You want to party?) instead of “Don’t stop the party”, which earned a couple of cheers from the crowd, of course. Here’s a short clip we recorded, and you can clearly hear him saying “Gusto nyo ng party?”. Hahaha! :D Pardon the quality of the video. I mean, seriously, I’m even glad I was able to take decent photos and clips that night ’cause I can’t help myself, but dance and party along with them. :D

It was fun seeing everyone around me singing along as the Black Eyed Peas continued on performing “Don’t Phunk with My Heart” and “My Humps“, with all of them, especially Fergie and apl.de.ap, moving around the stage to keep the party pumping. It was pretty obvious the foursome were also having a great time. 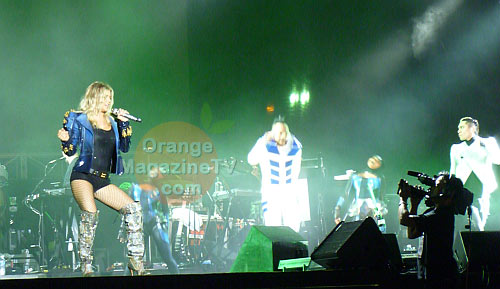 Then, after a quick break, Fergie came out in this beautiful, pink galaxy dress. When the spotlights were turned off, her dress lit up! Cool, eh? 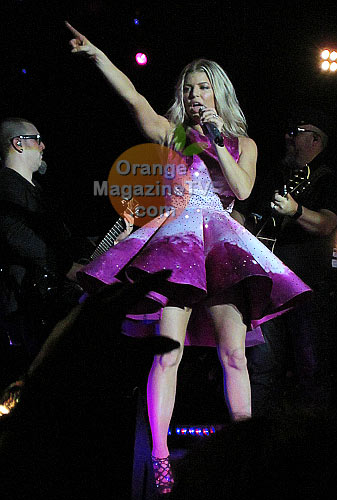 She walked off to the front, closer to us, and started singing “Big Girls Don’t Cry“. We were all in awe as she sang her heart out, so when she requested we put our hands up and give her some love, we gladly did. :) 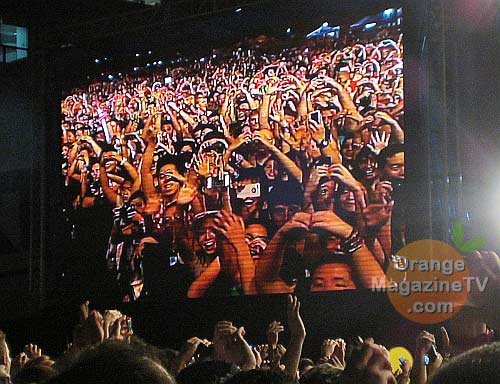 will.i.am followed her solo performance walking on stage with this robot costume on. He went to the front and center of the stage, up by what looked like a DJ mixing booth. 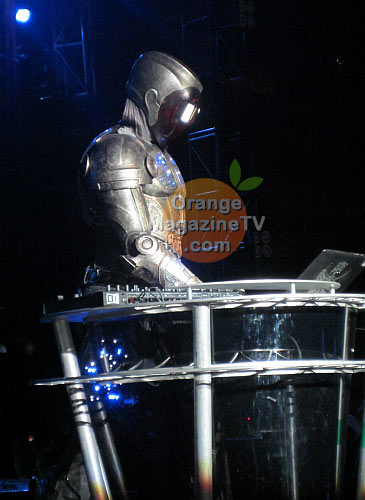 We were shocked as the stage he was standing on starting elevating. Here’s a clip we hastily recorded while this was happening. Pretty cool, huh? He played very familiar tunes, including Usher’s “Oh My Gosh“, which I totally loved! We were all shaking our bodies to the beats. 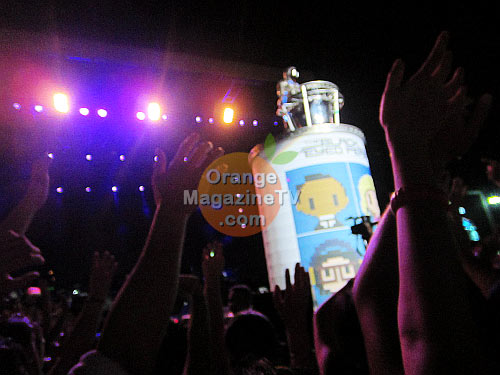 Right after a couple more songs, he went backstage and they all came out and performed “Pump It” before they started into a more intimate mood as they sang, “Where is the Love?”

will.i.am started singing, “Philippines is family” as they thank all the Pinoys who supported the Black Eyed Peas throughout the years, especially all the love we showed for one of our own, apl.de.ap. 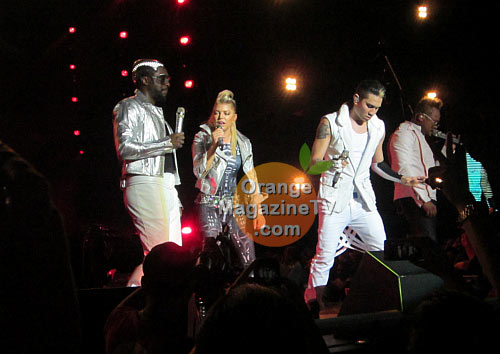 With this, the presentation on what Allan Pineda (Apl’s real name) has been up to recently was shown on the widescreens. It was touching to know that apl.de.ap pays it forward by helping the youth get better education by putting up schools and learning centers through his Apl.de.ap Foundation (AdAF). 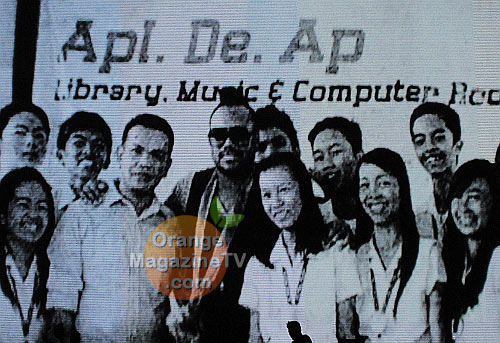 After a speech from USA Ambassador Harry K. Thomas Jr. sharing with us how America is in support of this project and of the Philippines, Apl then introduced his latest project – We Can Be Anything. It’s a joint project with the Ninoy and Cory Aquino Foundation (NCAF) as the special ambassador for education of the iamninoy-iamcory Movement last February 2011. People can donate for the cause and benefit of the Bayanihang Pampaaralan initiative of 57-75 movement for educational reform and the MyLibrary program of Ayala Foundation/ Philippine Development Foundation. For more info, visit their website: www.wecanbeanything.com. 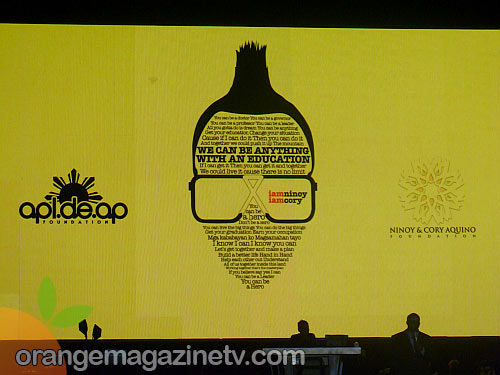 apl.de.ap then performed the song “We Can Be Anything” live, with young kids joining him on-stage. Here’s the official video for the song: The following lines kept on resonating in my head…

All you have to do is dream
You can be anything
Get your education
Change your situation.

After singing “The Apl Song”, apl.de.ap revealed his partnership with Smart, one of the biggest telecommunications company here in the country, and the new logo. It was pretty cool, and I was quite surprised as I haven’t seen any announcements about it. Apl mentioned they’re coming up with a new phone made by Pinoys and for Pinoys, if I remember it correctly. I’m excited about that! :) 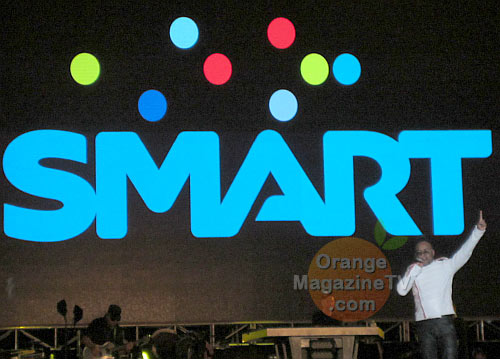 The party continued on with Apl singing “Bebot” and “Mare“. Dang! I wished I had more room to dance! Hahaha. Everyone around me were dancing, too, so it was definitely an all-night party. :)

apl.de.ap showcased his break-dancing skills before leaving the stage, and we were lucky enough to take a vid of it:

There was a long pause after Apl’s solo, and we were all yelling for more. The whole group seemingly took heed and came out and performed “Boom Boom Pow“. 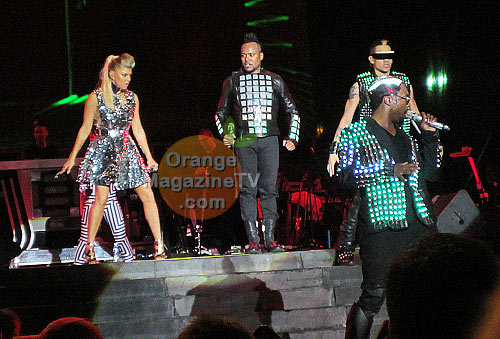 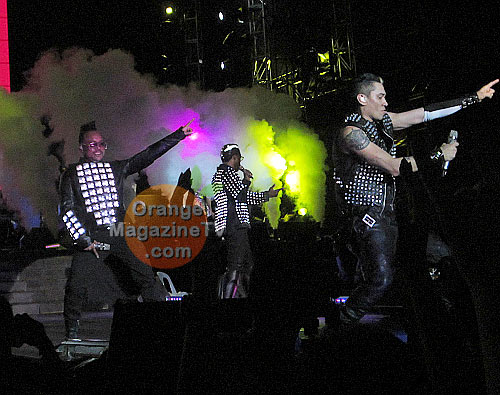 Then, they paused for a bit and, again thanked everyone for the support and coming out that night to watch them live. Rumors of the group breaking up came back to me as they continued on, especially when Fergie tearfully expressed how much she appreciates the presence of will.i.am, Taboo and Apl in her life as she considers them as her brothers. They said the concert is somewhat like their graduation before they go on a break. 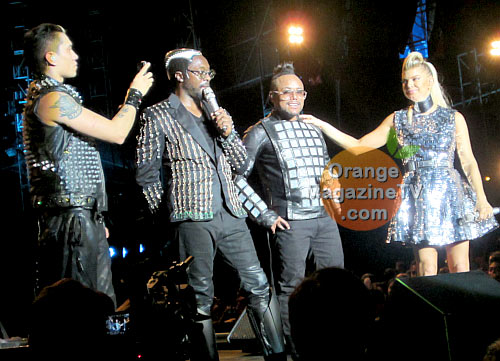 They all had their own chance to be in the spotlight and was quite successful with their own solo projects. But, I really hope that they won’t go their separate ways. I love this foursome – how they perform, their chemistry on-stage, their music, their harmonies that never fail to make me bop my head whenever I’m listening. I want to continue in the next coming years dancing along to more of their music.

I honestly was taken by them that the last song I remember was them performing “I Got the Feeling“. 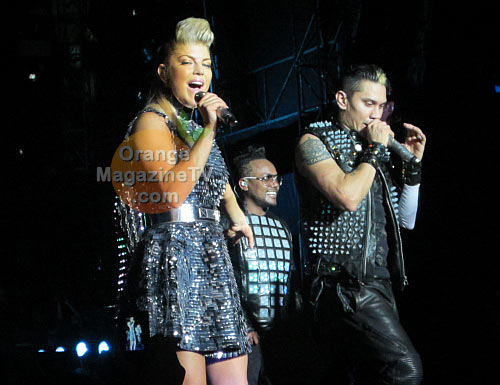 Taboo surprised us by jumping off the stage and climbing up the railing on my right side. Oh gosh, he was SO CLOSE! I wanted to move in, but there were too many people already who pushed and forced themselves closer to him so I stayed in my place and took photos instead. 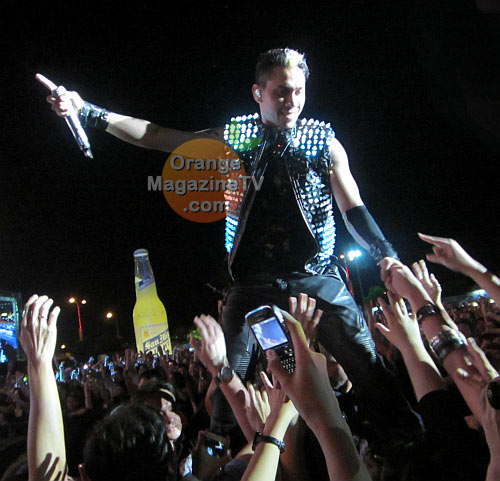 I so love Taboo now! Among the four, he’s got mad (read: sexy) dancing skills, I tell yah! Here’s a short clip of him dancing behind will.i.am. Pardon the lighting, the spotlight was on them, but you can see Taboo moving his body to the music. :) Before leaving the stage, the Black Eyed Peas raised this Philippine flag, with words saying, “Filipinos are the best ever Peabodies“. How cute! 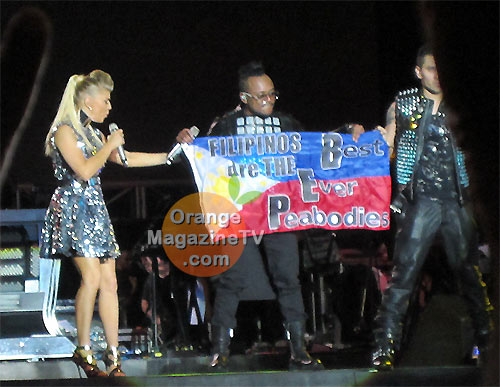 There was an after-party in Republiq. As much as we wanted to join and meet them up-close and personal, we had to pass. We were pretty satisfied to have watched and partied with the Black Eyed Peas that night – VIP style!

Thank you, Futuretainment Inc. Thanks, Black Eyed Peas and we hope to see you perform live again very soon! :)

Written by Mhel Ignacio, web administrator and Associate Editor of Orange Magazine TV. She is a web/blog and graphics designer who also blogs over at Certified Foodies, Just Another Pixel and Pinay Reviewer.