Carey Mulligan, Dragged into the Underworld in “DRIVE” 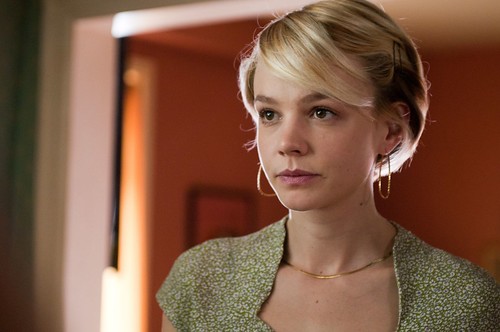 In the film, Driver (Gosling) is a Los Angeles wheelman for hire, stunt driving for movie productions by day and steering getaway vehicles for armed heists by night. Though a loner by nature, Driver can’t help falling in love with is beautiful neighbor Irene (Mulligan), a vulnerable young mother dragged into a dangerous underworld by the return of her ex-convict husband Standard (Oscar Isaac). 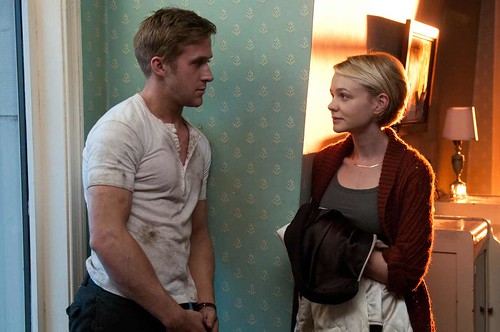 Mulligan had been a fan of Refn’s past films “Bronson” and “Valhalla Rising” and had even mentioned to her agent that she wanted to work with a director like Refn, but it was only after she expressed interest in the script that she learned who was helming “Drive.”

The actress’ enthusiasm was matched by Refn’s, who immediately ordered small rewrites of Irene’s backstory so he could cast Mulligan. In the novel, “Irene is a Latina. Director Refn confirms, “Originally I was looking for a Latina actress. I hadn’t seen Carey’s films, but the minute she walked in the door, I knew we had our ‘Irene’. It just cemented the love story in a much more interesting way. It made it more of a “Romeo and Juliet” kind of story without the politics that would in this day and age be brought into it if you had different nationalities or different religions.”

Mulligan explains her interest in the part: “Irene’s character was a challenge because she’s literally about the love triangle between her, Driver and Irene’s husband Standard but dramatically is about where they’ll all end up in the most meaningful sense. And it’s not an easy decision for her. Driver certainly seems like Irene’s knight in shining armor, but Standard is drawn very sympathetically, as someone who’s made mistakes but is genuinely trying to turn his life around. Plus she’s loved him since she was 17. So to be able to play those two impulses off of one another, especially after the Standard and Driver form an uneasy alliance, gave me so much to work with.”

Says Refn: “Since I was a teenager, I’ve been a big fan of ‘Sixteen Candles.” I’ve always wanted to remake that film one way or another and, in a very unlikely way, I’ve done that withe ‘Drive”. Carey has all the intelligence and charm of a young Molly Ringwald. The romantic scenes she has with Ryan make for a very delicate and beautiful contrast to the brutality in the rest of the film.”

Winner of the Best Director prize in this year’s Cannes Film Festival, “Drive” will be shown exclusively at Ayala Malls Cinemas (Glorietta 4, Greenbelt 3 and Trinoma) starting Nov 9. The film is directed by Nicolas Winding Refn and adapted from James Sallis’ 2005 novel of the same time.