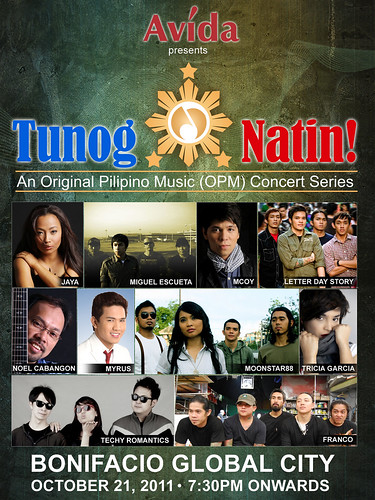 TUNOG NATIN – a concert series campaign that aims to promote Filipino music – is back with with yet another free musical gathering at Market! Market! in Bonifacio Global City (BGC) on October 21.

Fresh from the tremendous success of its first two concerts, “Tunog Natin! An OPM Concert Series” aims to revive the Filipinos’ interest for local artists and their records. The third leg of the concert also coincides with the launch of Avida Land Corp.‘s Avida CityFlex Towers BGC and Avida Towers 34th Street BGC.

“Tunog Natin 3 has a new set of performers that represent various music genres such as pop, rock, and RnB. This event is going to show how rich and diverse OPM is,” says gold record awardee Myrus, who is also the Project Head of Tunog Natin.

Headlining the much-awaited OPM concert series is the multitalented artist Noel Cabangon who is known for his breakthrough radio hit “Kanlungan” and his album “Byahe” that has reached platinum status.

Other artists includes Philippines’ Queen of Soul Jaya who recently launched her new album “All Souled Out” from here new recording label, Universal Records (a separate article about her album launch can be found here).

Pop-rock artist Miguel Escueta is also set to deliver an intense and entertaining performance during the concert.

There is also going to be a performance from former Orange and Lemons front man Mcoy Fundales, who is now the vocalist of the band Kenyo, as well as MCA Music‘s easy listening gem Tricia Garcia.

Superband Franco will also be rocking the stage of Tunog Natin 3 with their smashing hits such as “Cast Away” and “This Gathering“. Sony Music’s rock band Letter Day Story is also going to take part in the event.

Seasoned rock band The Dawn is likewise going to perform in this leg of Tunog Natin. This is the second time that the band will join the advocacy.

Electronica pop band Techy Romantics and four-piece band Moonstar 88 that popularized the songs “Torete” and “Migraine” will also be joining the lineup.

Now on its third leg, Avida Land shows no sign of slowing down in campaigning for our beloved Pinoy music.

“We really hope that more people will join the advocacy of saving and flourishing OPM. It’s not yet too late as long as artists and Filipino audiences will work together,” says Tess Tatco, Avida Land marketing manager.

Here’s a video message from Myrus and Tricia Garcia during its press launch held at Cafe Juanita last October 15.