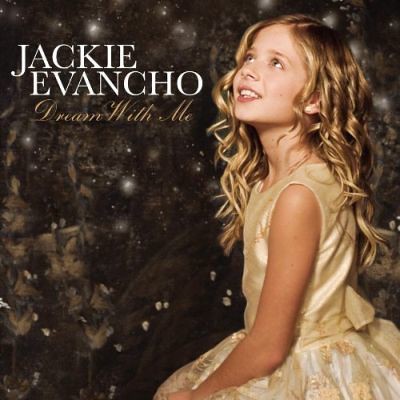 The Hitman, David Foster, has once again discovered another star in the making! He recently gave our very own Charice Pempengco the opportunity to be known globally and now, it’s the tiny 10-year old Pittsburgh child prodigy Jackie Evancho turn to shine.

Produced and arranged by the Hitman himself, Jackie Evancho’s “Dream With Me“ fulfills the promise of O Holy Night, Jackie’s major label debut, a seasonal collection which became 2010’s #1 best-selling debut recording with sales exceeding 1 million units. Dream with Me features a repertoire of classical arias and pop classics handpicked to suit Jackie’s angelic voice. Her range is so great that she ably shifts from the Disney classic “When You Wish Upon A Star” to Puccini’s “Nessun Dorma.” Other highlights include two extraordinary superstar duets showcasing the young vocalist performing with music legend Barbra Streisand (“Somewhere” from West Side Story) and international phenomenon Susan Boyle (“A Mother’s Prayer”) The album is produced by the legendary David Foster, a sixteen-time Grammy winner (including three Producer of the Year trophies) who has worked with Celine Dion, Josh Groban, Michael BublÃ©, BeyoncÃ©, Prince, Barbra Streisand and many others.

“I can say without a doubt that working with Jackie on Dream With Me was truly phenomenal. Her natural ability and the depth of her understanding of the musical process left me speechless. I think we have created a musical experience that will thrill audiences of every age. She was a pure joy to work with and I had a front row seat to one of the next great talents of our time,” said David Foster.

Jackie Evancho, who has the extraordinarily big voice and perfect pitch, was first heard by millions of people sing on “America’s Got Talent.” After coming in second place to a 20-year old opera singer, Jackie entered more contests as her talents blossomed. She caught the attention of Grammy-winning producer David Foster, when she won a regional competition that allowed her to sing as Foster accompanied her on piano. “He thought her voice was extraordinary,”. She performed the National Anthem at the Pittsburgh Pirates 2010 home opener, as well as at an event honoring Chuck Yeager.

It seems unfathomable now, but Jackie’s appearance on “AGT” came after other brushes with the show were met with rejection.     She auditioned twice for “AGT” in person in Philadelphia and the producers passed on her.   It wasn’t until her parents submitted a YouTube audition for “AGT,” almost on a whim, that she finally found her home on center stage.

“I saw a video with [“AGT” host] Nick Cannon saying they were doing YouTube auditions,” Mike recalls. “We decided to put something up and then we forgot about it.”

The viewers who watched Jackie’s stunning audition submission couldn’t forget what they’d witnessed. She earned the most fan votes through the YouTube competition, awarding her the twelfth spot among the slate of “AGT” contestants for the show’s fifth season.

Jackie Evancho’s first on-air performance, in which she sung Puccini’s “O Mio Babbino Caro” was transcendent, shocking and delighting the surprised audience. That debut appearance remains a highlight for Jackie. “She thrives on stage and the applause and to have these judges recognizing her, it did mean a lot to her,” Mike says.

The judges were instantly smitten. “I can’t believe that from this tiny body, this huge mature voice you have,” said Sharon Osbourne.   Piers Morgan said, “This is one of the most extraordinary performances that I’ve ever seen on ‘America’s Got Talent’.” Howie Mandel simple stated, “You’re an angel. You’re a superstar.”

She further wowed everyone with her subsequent performances of “Time to Say Goodbye,” made famous by her idols, Andrea Bocelli and Sarah Brightman; Webber’s version of “Pie Jesu,” and, in the finale, the classic “Ava Maria.” Her sterling appearances sent sales of her self-made independent release, “Prelude to a Dream” soaring up Billboard’s Top Classical Crossover Albums Chart, where it peaked at No. 2.

The “AGT” runner up has nothing but fond memories of her time on the show.   “It was amazing to be on ‘America’s Got Talent’ because it’s really helped me to reach my dreams,” said Jackie. “It’s helped me to show off my talent and helped me to realize how fun what I do is.”

When it came time to make her first post-“AGT” recording, there was no question that she would continue in the classical crossover genre. Including traditional Christmas carols seemed like a natural fit.

Keeping her extraordinary life as normal as possible is vital to Mike and Lisa, Jackie’s parents. “She gets in trouble like any other 10 year old,” Mike says. “There are times she can’t play with her friends because her homework isn’t done…She has to do the normal chore stuff: clean her room, straighten up.”

But most 10 year olds haven’t decided what to be when they grow up. As Jackie told WPXI, “my dream is to make a career out of this.” Yet, even at a tender age, she unselfishly realizes her success can inspire others. “If they have a dream, they should always go for it because that’s what happened to me and my dream came true.”

And that dream is just beginning.

Grab a copy of Jackie Evancho’s DREAM WITH ME, available in music stores nationwide, only from Sony Music and Ivory Music & Video.