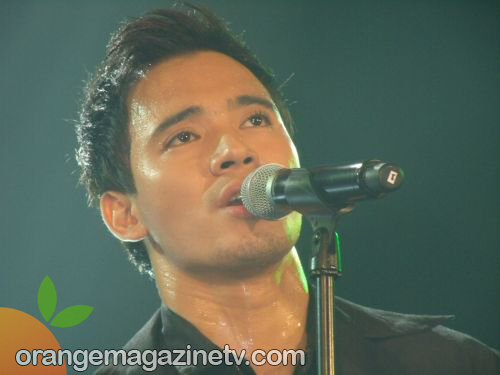 Erik Santos held a 2-night sold out concert at the Music Museum last August 12-13 and Orange Magazine TV was there to witness its success.

Like his past concerts, he still gets the usual standing ovation from his audience and his recent concert was well-attended by his followers and celebrity friends like Sarah Geronimo, Rachelle Ann Go, Gary Valenciano, Toni Gonzaga, John Lloyd Cruz, to name a few, to support

I got the chance to cover his 2nd night though I was a little hesitant at first because I was never a fan of Erik Santos. I’m a Christian Bautista fan eversince they competed at Star in a Million. But since I was joined by other music bloggers, I said to myself that maybe I can stay a little longer but no plana to finish it. And I was wrong. Song after song and I’m hooked already. And yes, I ended up watching the entire show!

Erik Santos opened the show with a Miley Cyrus hit “The Climb” and dance his way to Backstreet Boy‘s “Larger Than Life”. Though the performance is great, I was confused why he included it in his reportorie since the show is a tribute to Icons. And I don’t think Miley Cyrus and BSB are Icon materials. But he makes it up with other tribute performances for Barbara Streisand, Celine Dion, Mariah Carey, Whitney Houston. He also performed some of the hits of Usher, Josh Groban, Beyonce, Britney Spears and Rihanna. Other tribute includes the hits of Barry Manilow as well. I’m quite not sure with some of the selection they did but I wont argue with the OPM artists that they included. One of the outstanding performances Erik Santos did was the Diva Medley he did as tribute to Kuh Ledesma, Pops Fernandez, Zsa Zsa Padilla, Regine Velasquez and Sharon Cuneta. Crowd went wild with the duet he did with Star Power Grand Champion Angeline Quinto as they perform the songs popularized by Philippines’ only Superstar Ms. Nora Aunor. Angeline Quinto, on the other hand, did an amazing version of Lani Misalucha‘s classic hit “Bukas Na Lang Kita Mamahalin”. Other special guests in his concert includes Ms. Saigon’s Stephanie Reese and Concert Queen Pops Fernandez. I’m sorry but until now I still can’t figure how Pops Fernandez, aside from being married to Concet King Martin Nievera before, got the title Concert Queen when the only memorable songs she had was “Don’t Say Goodbye” and the duet she did with Joey Albert (“Points of View”) and Freestyle (“Bakit Ngayon Ka Lang”).

Her performance doing a mash-up of Lady Gaga‘s “Born This Way” and Madonna‘s “Express Yourself” is just lame. Sorry Pops but it’s time you give up your crown already to Sarah Geronimo who deserves the title even more.

Erik Santos also did a tribute to the King of Pop Michael Jackson. But the one that gives him more cheers is the surprise duet he did with Mr. Pure Energy Mr. Gary Valenciano doing a medley of his and Martin Nievera‘s classic hits. But my personal favorite is his Basil Valdez tribute. It was beautifully interpreted. His version of Freddie Aguilar‘s “Anak” is also remarkable although the video presentation is a little distracting. Well, most of the video support actually doesn’t fit but it’s tolerable.

Over all, my concert experience was good. I’m only hoping he will improve his spiels because for a world class performance that I’ve seen from his concert, he should be giving better spiels and avoid too much comedy. But I’m proud to say that I’m now a fan of Erik Santos. I can’t believe it took me years to finally realize that he indeed deserves to be ‘The Star In A Million’ grand champion. And I’m looking forward to watch his concert again.

Join the search and follow the clues in the WeTV Original Series “Section St. Valentine: The Disappearance of Divine”

Team Orange 14 Jan 2021 0 comments Press Releases
It’s a new school year, and the students at the Manila International School are starting their online classes. When the teacher does roll call, the most popular girl in school…