In a dystopian future, time is gold. No, time is  money, to be accurate.

To control the Earth’s population, men are genetically engineered to stop aging at 25 years old, and from then on, their days are numbered.  Literally.  A phosphorescent digital clock on their forearm starts the default time at 51 years and begins to ominously tick to their demise. And since time is the currency (4 minutes for a cup of coffee, 2 hours for a bus ticket, 1 minute to use the payphone, etc), the poor die early and the rich live forever.  It’s a caste system separated by Time Zones, the New Greenwhich (Greenwhich Mean Time?) being the time zone of the richest, the residents are centenarians, Hollywood celebrity-looking men and women with hundreds and thousands of years on their forearms, where time is slow and men gamble for leisure. 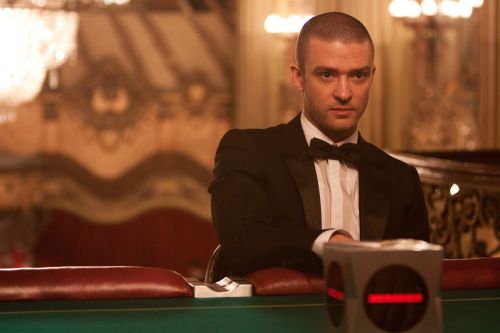 Our hero, Will Salas (Justin Timberlake), was unfortunately born in the poorest Time Zone, in “The Ghetto,” where time is fast and the folks struggle, negotiate, or steal time in order to live a little longer than their 25 years. Men and women dropping dead is a daily  occurrence, young bodies lying in the fast-living streets. It’s a harrowing destitute experience, and Will’s is no different– until he becomes instantly rich, unexpectedly given a hundred years by a thousand-year-old rich man tired of living, right before killing himself. The conflict? Will is accused of murdering him. 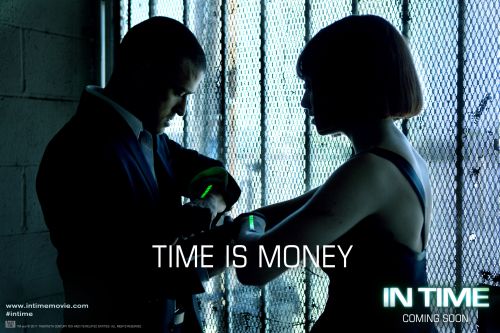 And thus begins Will’s adventure as he explores the rich life as a fugitive, meets a beautiful rich rebel at New Greenwich (Amanda Seyfried), while being chased  by two groups: a  mob called “The Minutemen” who cleans time in The Ghetto, and  the Timekeeper (Cillian Murphy), who leads an FBI-like organization that makes sure time is in the right hands. 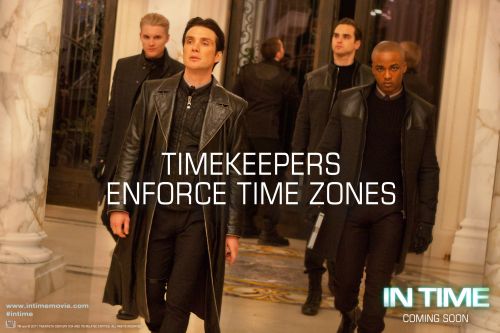 In Time, a sci-fi thriller written and directed by Andrew Niccol, who brought us the elegantly written and directed sci-fi  Gattaca  (Ethan Hawk) and the memorable  Truman Show  (Jim Carrey), gives us the same feel as  Gattaca;  a retro-future, with the Earth looking just the same and men are dressed like  GQ  models and  Mad Men  characters, even casting Vincent Kartheiser as the richest man in the world. But with  In Time, Niccol gives us a stark and raw treatment, none of the creative color-schemed treatment he used in  Gattaca. Do not expect a special effects-riddled futuristic treatment, but rather expect an almost  literary experience, an emotionally engaging human interest story– but not without a dose of suspense. 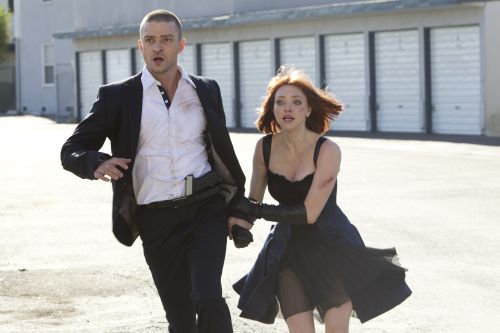 Justin Timberlake gives a credible performance in the movie, playing his role of a socialist and suave modern-day Robin Hood smoothly and sincerely, making him a fitting protagonist, stripping away all my  skepticism of his hero capabilities in the movie. The wig-wearing Amanda Seyfried, though,  plays her perpetually impressed bored socialite role a little bit lacking, but her character was not written rich enough, anyway.

Outside of its science fiction element,  In Time‘s plot is generic, but since the screenplay was well-written, the cinematography refreshingly archaic, and the fitting and elegant musical score beautifully heightening and emotionally charging the formulaic Hollywood scenes,  In Time  will still  absorb you into its dystopian world, and you will leave the cinemas still sensing Will’s world…making you distinctly aware of the invisible clock on your forearm. Tick tock.

“In Time” is rated PG 13 and opens October 28 in theaters from  20th  Century Fox  to be distributed by  Warner Bros.

Our contributor, Stephanie Mayo works as a copy writer, an editor on the side, and she’s a passionate and aspiring filmmaker. She will simply die without movies. Catch her latest movie reviews on her blog,  Film Check.