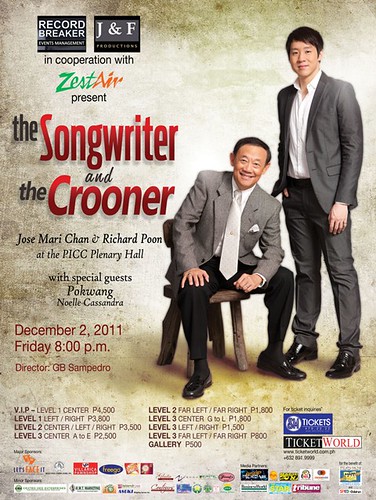 Mellow music aficionados and OPM fans are in for treat as two generations of crooners meet in a one night only concert this coming 2nd of December 2011 at the PICC Plenary Hall.

This special show will feature OPM legend and singer-songwriter Jose Mari Chan and modern day crooner and big band music enthusiast and practitioner Richard Poon in a show entitled “The Songwriter and The Crooner.”

The show promises to be a good one as it represents the best of the past, represented by the hit making Jose Mari Chan and the promise of a refined future for OPM in Richard Poon. Jose Mari Chan, known for his songs such “Tell Me Your Name” and “Beautiful Girl” among others will be sharing the stage with Poon for the first time ever on the upcoming PICC show.

Meanwhile Richard Poon, a self-made ‘big band crooner’, considers the concert a fulfillment of a long standing dream of singing the classic hits of Chan, as well as performing them with the songwriter himself. “No doubt about it, Jose Mari Chan is an inspiration to me both professionally and artistically” said Poon. “All his songs have that classic quality and as a musician and singer I aspire for the same thing in my career” he continues.

Jose Mari Chan no doubt inspires singers like Poon with his unforgettable hits and inimitable singing style. The singer also impresses by being the only male OPM singer garnered the Diamond Record award for record sales of his album “Constant Change.” 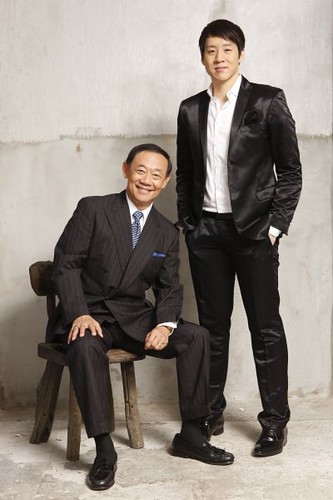 Comparatively, Richard Poon’s career is right on track as the young singer already has his platinum certified albums and multiple singing awards and recognitions to his name. The singer is also making waves as part of ASAP Rocks‘ Sessionistas.

Besides the two singer’s love for all things classic and mellow, Jose Mari Chan and Richard Poon have been good friends for some time now, all the more cemented by their shared bond for their Chinese ancestry. Speaking of, the Chinese community, had been asking for a Chan-Poon pairing for some time now, and will be delighted of finally seeing these two musicians together.

The two have been hard at work preparing for the concert and promises an unforgettable evening of hits and classic music and a few surprises as well. Among those surprises perhaps includes guests singer-songwriter and harpist Noelle Cassandra and comedian Pokwang.

“The Songwriter and The Crooner” is produced by Record Breaker Events and J&F Productions, co-presented by Zest-Air and a concept of Cornerstone Talents & Events.

This concert has two beneficiaries :