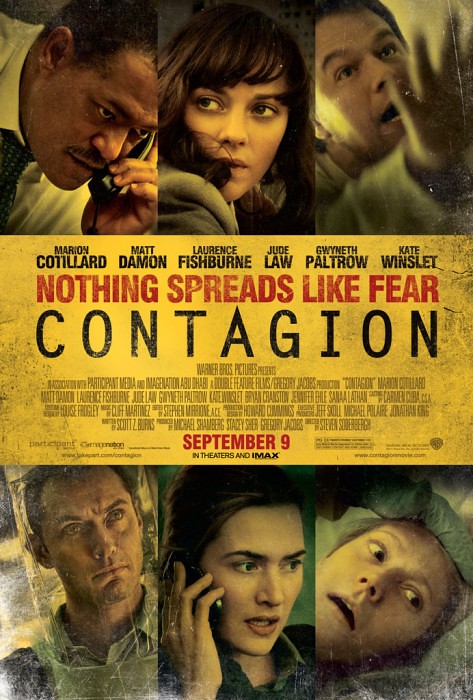 When I first saw the trailer of Contagion, I was not that sure if I’d be interested to watch it. But with such powerhouse cast, I still anticipated to see this film. That is why I am thankful for the invitation of Warner Bros. Philippines to attend their advanced screening of Contagion at iMAX Theater in SM Mall of Asia last September 8, 2011.

“Contagion” follows the rapid progress of a lethal airborne virus that kills within days. As the fast-moving epidemic grows, the worldwide medical community races to find a cure and control the panic that spreads faster than the virus itself. At the same time, ordinary people struggle to survive in a society coming apart. To know more about this movie, please click here.


The movie is heart-breaking (well, at least for me). Although it focuses on the virus problem – how to deal with it, survive the disease and their search to find the cure – it also tackles other issues which will be revealed in the movie.

What I loved most from this film is the actors. All of them, specifically Matt Damon, Gwyneth Paltrow and Kate Winslet, delivered good performances here. My heart breaks for Matt Damon’s character. And I salute Gwyneth and Kate for de-glamorizing themselves just to show how convincing they are for their roles.

I also like that they included a BLOGGER in that movie. Although Jude Law‘s character doesn’t portray a good Blogger in that film, it’s still nice that bloggers are now making waves even on films. Eliot Gold playing the role of Dr. Ian Sussman is quoted saying: “Blogging is not writing. It’s graffiti with punctuation.” That would be insulting if a Blogger will take that seriously but then again, not all bloggers are that bad. We just become easy targets.

And the ending? It’s for you to find out. But definitely, you’ll be confused. Although questions will be answered at the end of the film, you will still feel that something is missing and hanging from the story. But don’t expect a sequel for this.

If you ask me, watch this movie if you’re a fan of these amazing actors because their acting is superb in this film.