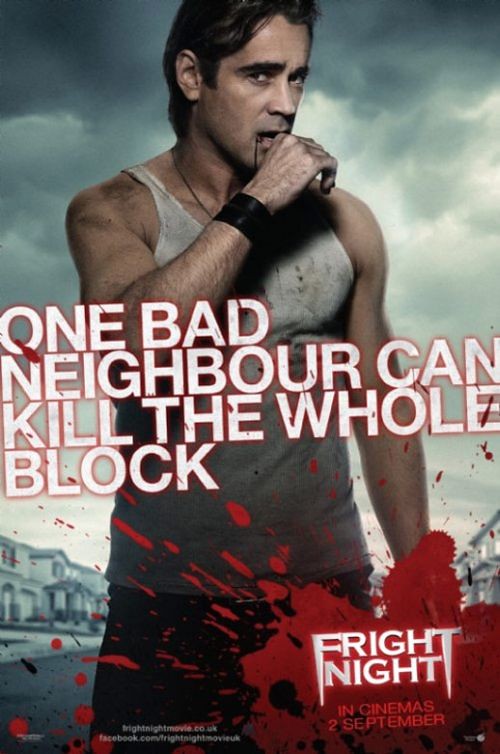 Last September 5, Monday, I got an invite to watch the advance screening of “Fright Night” at SM Megamall courtesy of sir Jay Gonzales.

Read some press releases about the movie but I never got to see the original version. To be honest, I am not familiar with the lead actor, but what matters really is the presence of actor Colin Farrell who plays villain for this movie. For me, Farrell is one fine actor. I’ve seen some of his films though the last movie I saw was biopic “Alexandre” which received mostly mediocre and negative reviews. Although being a villain isn’t new to Farrell (he portrayed Bullseye in the forgettable film “Daredevil”), I prefer him playing the lead better.

Anyways, the movie was shown in 3D. I was surprised it was in 3D because I am not expecting some special effects because it is a vampire movie to begin with. Watching “Fright Night” reminds me of “Ninja Assassin” because of the 3D blood splashing everywhere. It’s funny though because it looks more like a tomato ketchup than blood to me. Also, the 3D experience was bad because it turned out, according to sir Jay, “the cinema allegedly calibrated it wrong, hence the foreground became the background”.

But seriously, this kind of movie doesn’t necessarily need to be watched in 3D. But in fairness to the movie, it has good special effects and the story is fast pacing. It has the right amount of humor, suspense, thriller and trivia about vampires. Thank God for this because it brings back old school vampire flicks. And to quote movie blogger Joriben Zaballa, “it’s glitter free!” Hahahaha!

By the way, to give you an idea about Fright Night, here’s the movie synopsis taken from its official Facebook Page:

Senior Charley Brewster (Anton Yelchin) finally has it all-he’s running with the popular crowd and dating the hottest girl in high school. In fact, he’s so cool he’s even dissing his best friend Ed (Christopher Mintz-Plasse). But trouble arrives when an intriguing stranger Jerry (Colin Farrell) moves in next door. He seems like a great guy at first, but there’s something not quite right-and everyone, including Charlie’s mom (Toni Collette), doesn’t notice. After witnessing some very unusual activity, Charlie comes to an unmistakable conclusion: Jerry is a vampire preying on his neighborhood. Unable to convince anyone that he’s telling the truth, Charlie has to find a way to get rid of the monster himself in this Craig Gillespie-helmed revamp of the comedy-horror classic.

If you like Twilight, you will definitely not like Fright Night. But if you’re sick and tired of Edward Collins, then Fright Night is the best vampire movie to watch. You will be a little disappointed though if you are expecting sensual scenes just because Colin Farrell and Imogen Poots are there. But you will still love it though. This is the kind of vampire movie I will definitely choose over Twilight movie series. And Colin Farrel delivers fine acting for this movie!