Just came from the special screening of GLEE: THE 3D CONCERT MOVIE held at the Cinema 1 of SM Megamall.

Heard a lot of bad reviews about this movie but I never bothered to check it out. Though I can’t say I am a Glee fan, I do know how popular their TV version. And I must admit that I only get to see only three (3) episodes and one (1) of them includes the guesting of Charice Pempengco. I have to see that episode because it was a big deal having a Filipino artist in a foreign show especially like Glee.

Anyways, when I arrived at the cinema, I was expecting some geeks lining up with their school outfits and that famous geek glasses. But since I arrived exactly before it starts, the only thing I noticed was a few empty seats. I was anticipating there will be celebrities attending the event since this is a Glee movie.

As I seat comfortably eating my Van Houten chocolate, seating beside fellow movie blogger and a self-confessed Glee fan, Ruth Floresca, I was contemplating if I will get bored to this movie. To be honest, I am not a fan of watching concerts. I remember getting bored watching Michael Jackson’s 3D concert and I still haven’t finished it even in DVD. But it was different when I watched Justin Bieber: Never Say Never movie. But that’s because it wasn’t focused on the concert alone but also with Justin Bieber’s biopic. 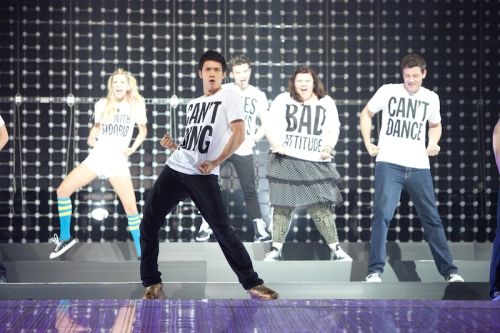 Back to Glee: The 3D Concert  Movie, I decided to watch this because I am intrigued  why the critics are bashing it. And I have to know what went wrong with this movie.

There were good points to this concert movie. Though it did the same pattern like what they did with Michael Jackson and Justin Bieber’s – inserting fans screaming and narrating their stories why they love Glee, who’s their favorite character, and how they can relate to them.

And that I think is the bad side of the movie. Putting too much fan exposures. But I did appreciate the kid who copies (another half-Filipino actor) Darren Everett Criss’ singing, dancing, and even his costume. I just hope his parents realized that what he is imitating is playing a gay role in Glee. That’s way too early to be gay. :-p 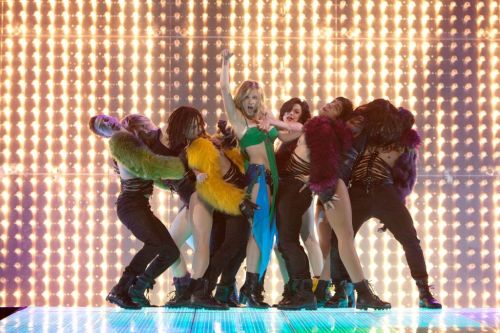 But the concert isn’t that bad. I liked most of the songs and its arrangement. I liked Brittany Pierce (Heather Morris) and Blaine Anderson (Darren Criss) performances. That Britney Spears production is hot! And for me, she sings and dance better than Britney Spears! But vocal-wise, Mercedes Jones (Amber Riley) nailed it without even trying. Her singing is flawless compared to the OA performances of Rachel Berry (Leah Michele).

And I felt the Fan scenes are dragging already that I am losing interest already. I also felt that there’s more to show, more singing that was cut just to give way to their adoring fan’s stories. I didn’t like as well how they edit every performances. I was actually hoping there’s a story line. But I guess this movie is exclusive to Glee fans only. I’m pretty sure my seatmate is irritated already with my question who’s who because I am not familiar with most of the cast.

But one more reason to like this concert movie is a surprise performance with Gwyneth Paltrow who also appeared in the TV series as McKinley High’s substitute teacher Holly Holiday. I love her version of Cee-Lo‘s Forget You.

And one more tip. There is an encore performance of the whole cast after the movie credits. Though it wasn’t that interesting, but at least there’s a bonus.

And after seeing the movie, I can’t still figure out why it ‘bombed’ in the US Box Office. It wasn’t a bad concert movie, but I can’t say it’s also good. But I am pretty sure hardcore Glee fans will still love this. Maybe ‘Glee’ got over-exposed and wasn’t as cool as it was before. This is just my opinion. But I wonder if what Sue Sylvester (Jane Lynch) said in her video message on of the cause of its fall-out because she advised everyone to stop believing and save our movie because the movie sucks. LOL. “Glee The 3D Concert   Movie” will open nationwide on September 21 for two weeks only – Metro Manila, Cebu, Davao, Iloilo, Bohol, Cagayan De Oro, Bacolod, GenSan, Tagbilaran, Pampanga, Angeles and Baguio. Exclusively released in 3D digital screens by 20th Century Fox thru Warner Bros.

You may also like to read some recent Glee posts I did here and here.

Team Orange 06 Jul 2020 1 comments Music
One of the country’s premiere divas, and the original Asianovela soundtrack royalty, Faith Cuneta returns to the music scene this 2020. After focusing on her own family in the past…

Team Orange 06 Jul 2020 1 comments Banking & Finance
Nowadays, it seems like we need less, not more, drama in our lives. Many of us already feel overwhelmed by the pandemic, lockdowns, and our fears for the health of…