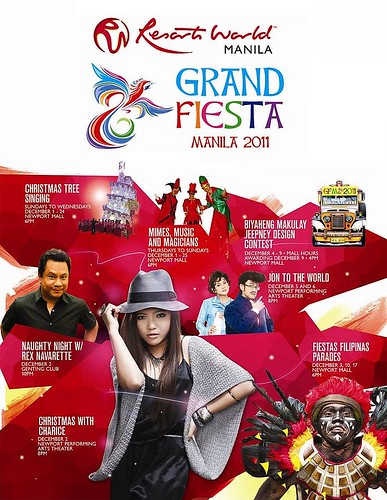 The grandest holiday season starts at Resorts World Manila as they once again brings Grand Fiesta Manila this December.

Starting December 1 at the Newport Mall, listen to some joyful carols for the “Christmas Tree Singing” and be entertained by “Mimes, Music and Magicians“.

Rex Navarette returns to Resorts World Manila on December 3 for a “Naughty Night with Rex Navarette” at the Genting Club.

On December 4, awarding for the “Biyaheng Makulay Jeepney Design Contest” will be announced, while comedian Jon Santos tickle your funny bones with his show at the Newport Performing Arts Theater on December 5 entitled “Jon To The World“.

Resorts World Manila (RWM) – Asia’s newest playground is located in Newport City, a modern live-work-play community and the first tourism economic zone in the Philippines, just across Terminal 3 of the Ninoy Aquino International Airport and adjacent to the Villamor Golf Course.

It also features the upscale Newport Mall which boasts of shops and boutiques for international luxury brands, high end cinemas, dining outlets, and the Newport Performing Arts Theater, a 1,500-seat venue for local and international artists and productions.