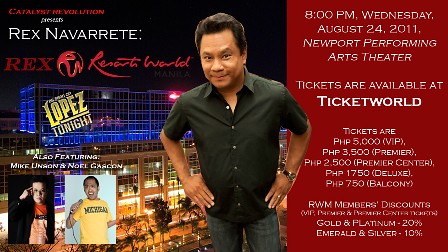 I was anticipating for this show after I covered his press conference and Rex Navarrette did an impromptu performance which cracks the hell out of our wits. I was joined by fellow bloggers Florencio Jusay, Ryan Joson-Vargas and couple Ruth and Nonoy Floresca and I got the best front row seat… seating beside controversial teen actress Andi Eigenmann (who’s not wearing make up and looks heavily pregnant) and his rumored boyfriend Jake Estrada (son of ex-President Joseph Estrada).

I felt uneasy watching the show because I’ve been wanting