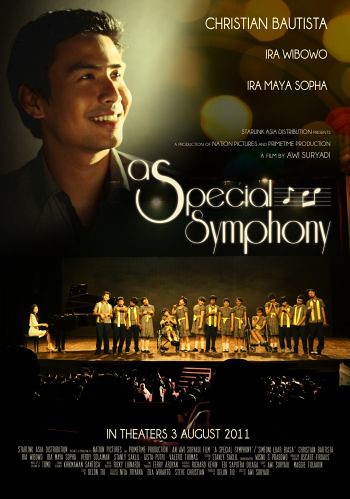 “The movie has a lot of heart. It is inspiring and it speaks of a great kind of love,” says Christian. “We hope to touch the hearts of everyone who will watch the movie, just as we were touched during the filming of this movie.”

The movie’s red carpet premiere in the Philippines held at Robinsons Galleria was a success and was well-attended by popular celebrities in the Philippines like KC Concepcion, Mark Bautista, Erik Santos, Crystal Henares, Martin Nievera, Kuh Ledesma and daughter Isabella, Rowell Santiago, to name a few, aside from his family, friends and legions of fans.

A Special Symphony uses Filipino (Tagalog), English and Bahasa as their speaking language and Bahasa and English as subtitles. Although most of the English subtitles did not correspond properly with the Tagalog words spoken, you will still get the idea.

Majority of its cast are Indonesian actors with its first scene shot in Manila where it shows the struggling life of Jayden (played by Christian Bautista), a Filipino singer whose quest for fame is not quite successful in the Philippines. He had no choice but to be forced to fly to Jakarta, Indonesia to live with his mother who “abandoned” him and his father 15 years ago. There he takes on a job as a music teacher for special children at SLB Cahaya Mulya and discovers his purpose in life and what can really makes him happy.

A Special Symphony was inspired by the story of a chorus of special children in Beijing, China and how their exposure to music stimulated their minds, developed their well-being, and earned them the adulation of many people. Although the story is not really an original concept, this movie will surely open your mind and understand better why these special children are special indeed.

It would have been nicer if they were real special children although I know that it will be harder for the movie production. But I am totally convinced how great this child actors playing the roles of special children. There is the right amount of comedy in this movie and values most Filipinos can relate with. Christian Bautista, on the other hand, did a fine performance for this movie and fits the role of Jayden. It is no doubt that his career will soar high after this movie. The cinematography is okay although it didn’t showed much scenery of Indonesia but the direction is well done. It even made me cry. I recommend this movie as a must see film!

The movie theme song “I am already King“, which topped the video and music charts is also the carrier track in Universal Records‘ latest compilation album The Best of OPM Love Songs Vol.1. Another version of this song will be heard at the movie as performed by the special children along with another John Lennon original “Imagine” which is beautifully done. Other songs were performed in Bahasa and its melodies are enough to feel how beautiful the song was.

The movie has earned the endorsement of Autism Society of the Philippines and is also supported by World Vision Philippines where Christian Bautista is one of their Ambassadors.

A Special Symphony will be shown in Philippine theaters this coming August 03 and will premiere in Indonesia this September.