Resorts World Manila (RWM) unveils another spectacular production that will enthrall audiences with its timeless tale of love between unlikely individuals. The Sound of Music makes a comeback this October in the Philippine stage at RWM’s Newport Performing Arts Theater (NPAT).

In line with its aim to champion Filipino talent in world-class standards, RWM presents The Sound of Music. Headlined by seasoned and promising newcomers alike, this new RWM production will surely be a musical and visual treat that will take its audience to another place and time. 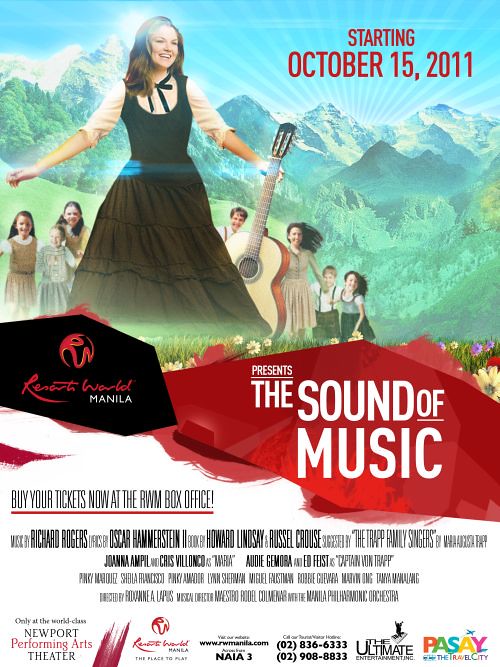 A musical by Richard Rodgers with lyrics by Oscar Hammerstein II and book by Howard Lindsay and Russel Crouse, The Sound of Music is the story of a young postulant, Maria Rainer, who is appointed governess of the seven children of widower Captain Georg von Trapp.   She teaches them the rudiments of music and allows them to discover a talent for singing they never once thought they possessed.   In the process, the Captain’s cold and stern heart turns soft towards his children, while the stiff, professional relationship he once had with Maria gives way unexpectedly to love.   Soon, they find themselves threatened by uncertainties of wartime as they struggle to build a new life together.

First staged in Broadway in 1959, The Sound of Music ran for 1,443 performances and won the Tony Award for Best Musical and Best Actress before premiering in London in 1961.   Since then, it has been re-staged in London, Broadway, and countless theaters worldwide.   In 1965, it was made into a film that starred Julie Andrews and Christopher Plummer.

Headlined by Filipino powerhouse Broadway talents, Maria is played by theater veteran Joanna Ampil with Cris Villonco as her alternate. Meanwhile, the strict but loving Captain Georg von Trapp is reprised by Audie Gemora with Ed Feist as alternate. The quiet and understanding Mother Abbess is portrayed by Pinky Marquez with Sheila Francisco as alternate. The role of the charming and ambitious Max Detweiler is shared by Miguel Faustman and Robbie Guevara. The captain’s fiancÃ©e, Baroness Elsa Schraeder, is played by Pinky Amador and Lynn Sherman.

A stellar creative team recreates the story with Roxanne Lapus at the helm of staging and direction. Orchestral music is provided by none other than The Manila Philharmonic Orchestra, led by Maestro Rodel Colmenar. Vocal Directress Lyn Fabella of Wind Song, a Christian singing group famous for its heavenly vocal blending, supports Maestro Colmenar in recreating the well-loved songs from the musical.

Noted couturier and designer to the stars, Francis Libiran, provides the costumes, from the military uniforms to the fabulous ballgowns. The picturesque landscapes of Austria, solemn hallways of Maria’s convent, and imposing interiors of the von Trapp residence is brought to life by production designer and scenographer Mio Infante. Adding to the visual feast is video producer Paul Soriano who will showcase video animation scenes simultaneously with the theater performance. Furthermore, the story is made larger than life with NPAT’s LED screen, touted as the largest in Southeast Asia.

This spectacular heartwarming production is an offering of Resorts World Manila. RWM presents The Sound of Music will run from October 15, 2011 to December 11, 2011. Show times are 8:00PM on Wednesdays, Thursdays, and Fridays; 3:00PM and 8:00PM on Saturdays and 3:00PM on Sundays. For ticket reservations and inquiries, visit any Ticketworld outlet or the Resorts World Manila Box Office. For more information on Resorts World Manila, visit www.rwmanila.com.