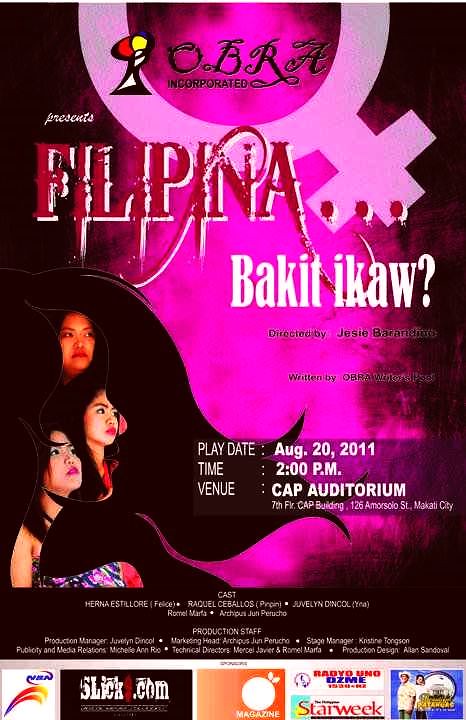 OBRA Inc., a SEC registered non-stock cultural organization, produces quality stage and film productions with socially relevant themes in its quest to enrich the arts through bringing awareness to the youth and instigating them to make a change.

Last August 20, they staged the “Filipina… Bakit Ikaw?” — a play that discusses the struggles and pains of women fighting for equality and learning to survive — at CAP Auditorium in Makati City.

The opening scene of the play is set in a church where all three leads pray for God’s guidance as they face the struggles that lies ahead. This prologue established that women in general face their challenges through the passive approach of prayer and sacrifice.

Felice is the first to impart her story to the audience. She is a single mother who went to Saudi Arabia in search for a better future and medication for her baby. Felice’s mistake in the past includes trying to commit abortion after she was abandoned by her boyfriend who impregnated her. This led to a dreadful lifetime condition for her child who suffers cerebral palsy.

Through interpretative dance numbers, the re-enactment of Felice’s abusive experiences as an OFW has been portrayed more meaningfully and captured the audience more deeply.

Felice then finds herself behind bars, impeded from her quest for prosperity to be able to answer the expenses for her child’s medication. Even in despair, Felice cries out her unending battle for her child.

The second story opens with a sizzling dance number as the setting changes to a local night club.

A coquettish woman came out scandalously shouting at her rival at the club. Though very much attuned with the vulgar ways of the club, when Pinpin starts to talk about her humble beginings, the audience starts to see in her the simple and innocent girl she once was.

As Pinpin dances with a partner during “the big night”, little did she know that the dance would actually lead to her forceful loss of virginity. After the show, Pinpin was devastated and gravely offended. But that made her the star of the club, having a lot of customers fall in line for her and pay her great sum of money in exchange of a short term clandestine physical pleasures.

Pinpin engages herself to these kinds of transactions until she fell in love with John, an American customer who never pushed her for any intercourse. Though it turned out be unrequited, she admired John for respecting her as woman. This made her decide to run away from the club and start a new life again.

But it seems life was not fair to her after finding out that she is already positive with HIV/AIDS.

The third and last story may have been treated lightly through the punchlines given out by the lead actors in the scene but nonetheless the weight of this episode’s issue is the same as the first two: the inequality between husband and wife.

Yna tells her story of being a young and carefree woman until she got married to Hener due to her early pregnancy. She works in a call center even though she’s heavily pregnant and was even assigned in the graveyard shift.

The last part of the trilogy portrays how sweet relationships may start during courtship until being together as a couple.

Yna caught her husband with another woman in their own house. Even in the critical months of her pregnancy, Yna confronted Hener and didn’t want to reconcile.

After a while, the two talked things through and reconciled. They eventually married each other and Yna is soon gave birth to their first born.

During the epilogue, the three women still thanked the one above despite the trials that they have been through in life. After their sacrifices, now comes their hope with prayer. Being passive about most things make women seem to be weak but in reality, prayer, sacrifice and hope are what strengthens women and keep them going in their everyday lives. 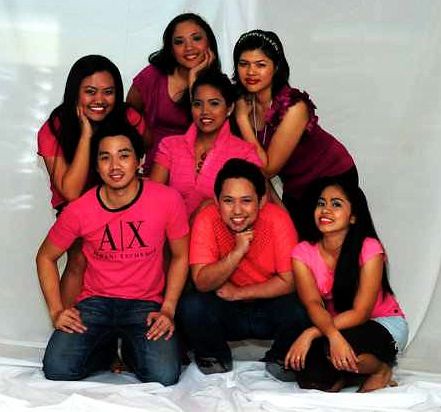 Another play will be happening on September 10, 3pm at CAP Auditorium for the third run of Filipina…Bakit Ikaw? For ticket reservations and other inquiries, contact Michelle Rio at 0918-5123600 or obraincorporated@gmail.com.