Last January 5, I had the privilege of having been invited to attend the special advance screening of  Alvin and the Chipmunks 3: Chipwrecked  at SM Megamall, hosted by 105.3 Wow FM. (editor’s note: a Press screening will be be held today, January 6)

I haven’t seen yet the first and second  Alvin and the Chipmunks  movies but I grew up loving the animated series on television. The singing trio of chipmunks became wildly popular after their debut in 1958 in the Grammy-winning single “Christmas Don’t Be Late,” written by Ross Bagdasarian, who introduced the chipmunk singing voice. Since then, the chipmunks have captured the world with their adorableness. 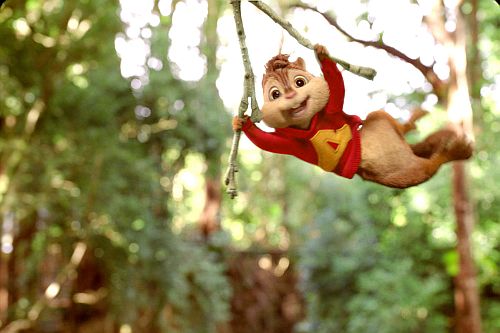 As my first full-length  Alvin and the Chipmunks  movie, I did not know what to expect. I was only aware that its predecessors were box office hits despite negative reviews by film critics. Looks like it’s a popular movie franchise parents love bringing their children to, as both generations are bonded with their familiarity with the cute singing rodents.

In  this third installment,  the chipmunks are still their  mischievous selves, led by Alvin (Justin Long), wreaking havoc onboard a vacation cruise ship, to the utter frustration of Dave (Jason Lee), their human dad. Their antics have caused the six chipmunks to actually land on a deserted exotic island. And thus,  we follow the adventures of the super adorable trio of talking chipmunks: Alvin, Simon (Matthew Gray Gubler), and Theodore (Jesse McCartney), along with their female counterparts, the Chipettes, while they are ‘chipwrecked’ on an island, waiting for Dave to rescue them. But Dave is also on the island, looking for his “kids,” along with the bitter Ian (David Cross), the former executive of a recording studio who had a history with Dave and the now world-famous chipmunks. 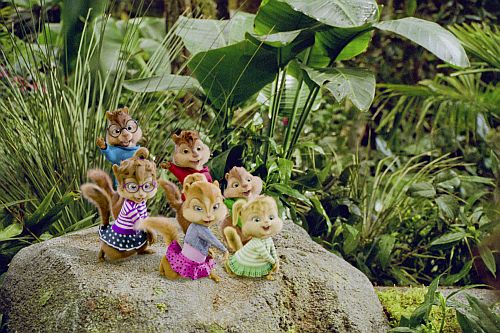 Alvin and the Chipmunks 3:  Chipwrecked, directed by  Mike Mitchell,  is light and actually funny, with references to familiar movies and TV shows, like Survivor and  Lost.  The cinema last night erupted from loud belly laughter from time to time, including me, as the clean, simple and cute humor hits all generations of moviegoers. And between the chipmunks’ adventures trying to survive and forced to live in the wild like “animals,”  they will entertain the audience with pop music (including “Surivor” by Destiny’s Child, “Bad Romance” and “Born This Way” by  Lady Gaga) that both parents and kids are familiar with.  Each chipmunk’s personality shines in this movie (but we get a surprise twist in this area).  The plot is very child-friendly, the antics and the dialogue are fast-paced enough for kids to follow, and entertaining enough for adults to get through just fine until the end.

The movie  will hook you from the beginning til the end by its unpretentious script. It’s a de-stressing experience that is clearly meant for kids but will tickle the adults, too. In its entirety, the movie is adorably cute (especially Theodore),  funny, cute, charming, cute, light, cute, entertaining, (and did I say “cute”?), and never boring.

Alvin and the Chipmunks 3: Chipwrecked  (one of the many blockbuster movie line up of 20th Century Fox for 2012)  will be showing in Philippine Cinemas this Sunday, January 8, 2012.  The chimpunks are voiced by popular comedians, including Justin Long, Amy Poehler, Anna Faris, and Christina Applegate.

Our contributor,  Stephanie Mayo  works as a copy writer, an editor on the side, and she’s a passionate and aspiring filmmaker. She will simply die without movies. She also did a review for Orange Magazine TV for the movie “In Time“. Catch her latest movie reviews on her blog,  Film Check.