Philam Life, the country’s largest life insurance company and the market leader for over 60 years, welcomes the Year of the Water Dragon with a special celebration to be held at the Philam Life office along Quintin Paredes St. in Binondo, Manila on January 20, Friday, starting 2:00 p.m.

“Philam Life has traditionally welcomed the coming of the Chinese New Year with a lot of flair and festivity,” said President & CEO Rex A. Mendoza. “It is our way of being one with the Filipino-Chinese community during one of the most significant and celebrated events in the Chinese calendar. We would love to have everyone join us as we welcome the Year of the Water Dragon.”

“The Dragon has always been perceived as the most preferred sign in the Chinese zodiac because of it connotes power, excellence and nobility. The year of the Dragon has always been considered to be one of abundance and prosperity,” continues Mendoza. “We believe that Philam Life represents these positive attributes of the dragon with our six decades of market leadership, our financial stability and solid track record of delivering on or promises, and our long heritage of nation-building and pushing forward the country’s development. Moreover, it is our vision to empower every Filipino to achieve financial security and prosperity.”

Crowds will start gathering at 2 p.m. at the Filipino-Chinese Friendship Arch at the foot of Jones bridge. After which, a 350-foot giant dragon (with an extra-large diameter of 3-feet) and a group of dancing lions will lead the parade along the main roads of Binondo — Quintin Paredes, Ongpin, Alonzo, Soler, Padilla, and Dasmariñas — before going back to the arch.

After the parade, a special program will be conducted along Quintin Paredes street facing the Philam Life office, to be hosted by Filipino-Chinese TV personality Lyn Ching. The program will begin with Mr. Mendoza leading the traditional ‘eye-dotting’ ceremony for the dragon and lion dance heads which will be used for the event. The ‘eye-dotting’ ceremony traditionally symbolizes the animals “awakening” or “coming alive” before being used for performances to bring good luck and prosperity to all that it encounters.

The program will also feature the unveiling of Philam Life’s new office signage. Philam Life previously used blue and green as its corporate colors; but going into the new year, Philam Life will be using a dynamic and vibrant red shade as its new corporate color, a reference to its affiliation with the AIA Group. 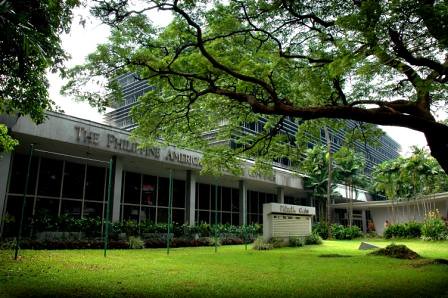 “Philam Life is part of the AIA Group, the largest independent publicly-listed pan-Asian insurer in the world,” explains Mendoza. “AIA traces its roots back to China, nearly 100 years ago, when its first office opened in Shanghai in 1919. We are one with AIA in sharing this Chinese heritage.”

Highlight of the program will be the releasing of 500 red balloons to the sky, with each balloon containing a wish, a dream, or a “sana” story from Philam Life policy owners, submitted through the company’s website anongplanomo.com.ph.