IT girl Solenn Heussaff makes her big-screen debut with Star Cinema as she stars in Da Possessed – in the biggest comedy flick to hit cinemas this summer season.

Known and highly-revered for her stunning good looks and drop-dead gorgeous physique, Solenn Heussaff is a Filipino-French VJ, model, make-up artist, and fashion designer who created a splash in the entertainment industry in 2010 as an actress and TV host who also ventured in the music industry as a singer and recording artist. Solenn Heussaff has since starred in numerous movies that showcased her competence as an actress. Moreover, Solenn Heussaff is able to establish a solid and loyal fan-base that is greatly enamored with her versatility and sensuality as an artist.

In Da Possessed, fans can look forward in witnessing the whacky side of Solenn Heussaff as she stars opposite Vhong Navarro for the very first time. Directed by box-office director Bb. Joyce Bernal and written by Ice De Guzman, Da Possessed is a joint project of Star Cinema and Regal Films. The movie revolves around the peculiar story of simpleton Ramon who attempts to venture into landscape art. Ramon falls for his sexy boss but conflict begins when spirits from another world start to possess his body thus igniting a series of whacky and riotous events.

“It’s such a joy to work with Solenn who, for me, is a very talented and promising comedienne,” says Vhong Navarro who is making a grand movie comeback via Da Possessed. “Her comedic timing is impeccable and it’s so natural for her to deliver a line and make it hilarious. I am very impressed with her.”

Director Joyce Bernal on the other hand, who directed three of Vhong Navarro’s most iconic and most successful films namely Mr. Suave (2003), D’ Anothers (2005), and Agent X44 (2007), is very surprised with Solenn Heussaff’s impeccable performance in the film. “Solenn is very sexy and sensual and yet she is able to maintain a wholesome image. It was so light and easy to work with her. She got along with everybody. Vhong and Solenn have very good rapport as actors and their chemistry on screen is so palpable. She constantly made fun of herself and she never took her beauty seriously in this film which made her all the more beautiful and funny.”

Co-actor John Lapus is also all-praises with Solenn. “She is so effortlessly hilarious. Her comedic performance in this movie is such a revelation to me. She didn’t have any qualms when she did her comedic scenes. Solenn really went all-out funny in this movie.”

For her part Solenn is thrilled to work with Star Cinema for the very first time, “This is definitely a major milestone in my career. It’s such an honor to finally work with Vhong, Direk Joyce, and Star Cinema in this awesome project.”

Da Possessed is showing in all cinemas nationwide starting April 19. 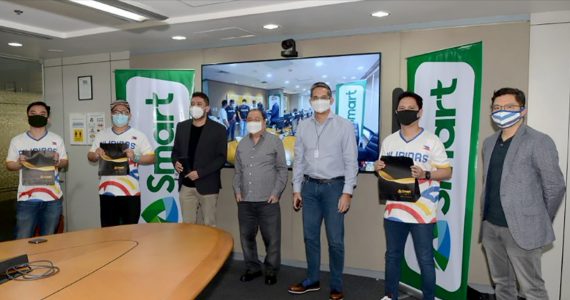 Team Orange 09 Jul 2020 0 comments
Members of the NBA 2K Team Pilipinas were recently given recognition by top executives from PLDT and Smart Communications, Inc. (Smart) in celebration of their topnotch performance at the just-concluded…