The much-awaited Philippine fiesta in United Kingdom is set to write a new milestone as it brings the stars of widely followed Kapamilya teleseryes to the two-day annual fiesta on July 16 and 17 at the Apps Court Farm at Walton-on-Thames, Surrey near Hampton Court Palace.

Just as Filipinos in London think they have seen everything, The Filipino Channel (TFC) and Philippine Centre is all set bring a different twist to the annual fiesta as they bring the lead stars of ”Born For You,” the well-loved “Pangako Sa ‘Yo,” and the recently concluded “The Story Of Us” and more Kapamilya stars to Apps Court Farm.

Expected to deliver their own take to the yearly extravaganza are Chinita Princess Kim Chiu and Kapamilya Heartthrob Xian Lim of one of the most stable loveteams on Philippine television, KimXi, as part of their “Story Of Us: Tsouristas Global Trip” on July 17. This is the second time, the popular love team is performing on the LBF stage.

Meantime, the fresh new team-up of Janella Salvador (who plays Sam Kazuko in the teleserye) and Elmo Magalona (who is Kevin Sebastian in the series) will perform on the “London Barrio Fiesta’ stage on July 16 for the first time to give Filipino fans a glimpse of what is to come in their serye “Born For You” which is also, like “The Story Of Us,” partly shot, overseas. 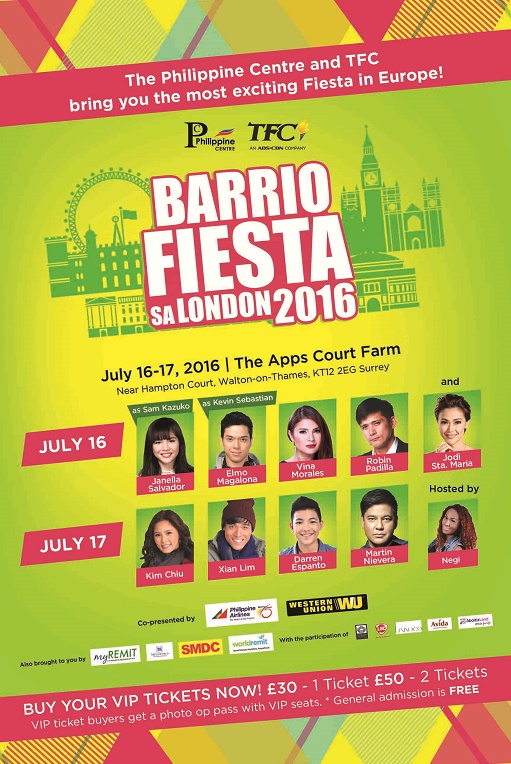 While the “32nd London Barrio Fiesta” is leveling up to bring the entertainment to a higher plane, the tradition will continue for some as the fiesta is returning to its home of Apps Court Farm which will again bear witness to the food, the festivities and all the fiesta that come with the annual tradition.

“While we want to bring a new kind of entertainment every year which we are delivering via three of ABS-CBN’s top-rating teleseryes and their well-loved stars, we also recognize our kababayans’ clamor to bring the LBF to its home of five years the Apps Court Farm.” Hermano Mayor Joseph Pariñas adds, “Ït is not only about what we can deliver but also how we can bring the annual fiesta they look forward to, in the manner and in a place that feels like home to them already.”

Adding more milestones to this year’s “London Barrio Fiesta” is the launch of ABS-CBN Foundation Europe to enable kababayans to reach out to their less fortunate kababayans across sectors.

TFC and Philippine Centre’s “London Barrio Fiesta” are all about giving the kind of engagement and outreach kababayans want and need and the 32nd installment is promising to deliver just that – the much-anticipated staging of the Philippine fiesta in UK, the way they remember it back home and more.

General Admission is FREE. However, limited VIP tickets for each day is for sale on a first come, first serve basis. For limited paid VIP tickets, call +44 772 093 5575