ALV Talent Circuit proudly hails the crowning achievements of some of its artists who have spread their wings and successfully penetrated the Southeast Asian region.

Headlining this batch is reigning WBO welterweight world boxing champion and incumbent Senator Manny Pacquiao, who reaffirmed his supremacy in the ring when he defeated Jessie Vargas in yet another memorable bout last November 6.

As he regained his impressive track record, the good senator was also chosen as the latest celebrity brand ambassador of the China-based sports apparel brand, ANTA, as well as a major

telecommunications company that will unveil its massive promotional campaign for him in 2017.

Next on the list is Kapamilya host Billy Crawford, who recently became part of KIX’s new reality/travel show, “The Ultimate BROcation,” in Hongkong, together with four other Asian superstars.

All throughout his six-day Hongkong stint, Billy made new friends, gained more followers and checked out some of the travel-friendly city’s most exciting and scenic spots.

The Ultimate BROcation will air first and exclusively on KIX, which is is available on Cablelink Ch.54, Cignal TV Ch. 133, Destiny Cable Ch.63, Gsat Ch. 18 and SKYcable Ch.63.

Not to be outdone, Karylle was signed up by Mediacorp, Singapore’s leading TV network, sometime late August, to play the lead role of a personal investigator/pole dancer/single parent in a single season crime thriller series titled Private Investigator, produced by Mediacorp and slated for release in Asian countries this December.

The It’s Showtime host, who recently concluded her two-night concert series at the Teatrino, is ecstatic about being given international recognition, and is optimistic that her Singapore stint will soon open more doors for her in the Asian showbiz circuit in months to come.

In the meantime, celebrity couple Eric and Rona Tai keep their fans forever at the edge of their seats as they try their best to outdo eleven other couples in the fifth season of Amazing Race Asia.

The launch took place at the National Monument in Jakarta, Indonesia. About 11 teams from other Southeast Asian countries vie for the US$ 100,000. 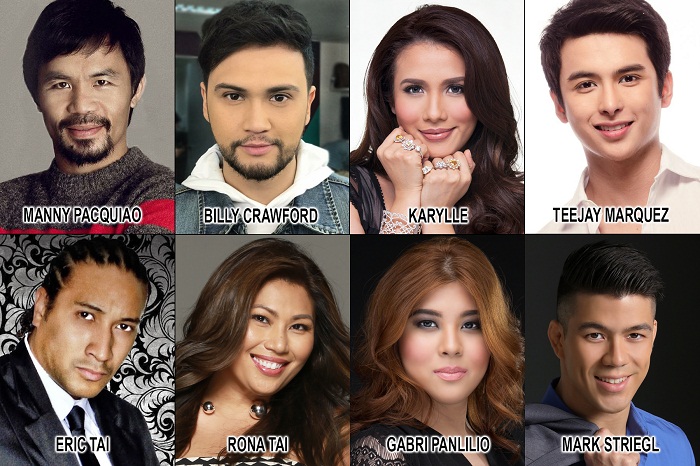 Both Eric and Rona are devout fitness enthusiasts and get a lot of mileage from their online workout videos that offer practical fitness tips to people of all ages and all walks of life.

The annual music festival, which started in 2011, is a fund-raising event aimed at proving financial assistance for talented but indigent musical prodigies from all over the Asian region, while at the same time forging strong intercultural relations among its member countries and affiliate international organizations.

Gabri will also be in Vietnam from November 30 to December 5 to sing during the annual holiday city tree lighting festivities in Ho Chi Minh.

Former Kapuso tween star Teejay Marquez, who signed up with ALV just last week, became a big hit in Indonesia when one of his dubsmash videos went viral, earning him an avalanche of fans and followers in the progressive Southeast Asian capital.

This was soon followed by offers to star in a movie (Dubsmash The Movie), a TV series, as well as an endless stream of media interviews where he was hailed as one of the Philippines’ brightest and most promising young talents.

Now taking a break after his hectic sked during the first half of 2016, Teejay is bent on pursuing his acting career and will soon be signed up by a major network.

Lastly, top-rank MMA fighter Mark “Mugen” Striegl hopes to score a first round knockout during his fight with Bulgarian opponent Sotir Kichukov at the forthcoming One Championship Age of Domination fight series scheduled for December 2 at the Mall of Asia Arena.

The tru-blue Pinoy martial artist has steadily been gaining his fair share of social media fans and followers thanks to his practical workout and self-defense tips.