In the latest totally relatable movie for mothers all over the world, “Bad Moms” brings together three overworked and under-appreciated moms who ditch conventional responsibilities for a jolt of long overdue freedom, fun, and comedic self-indulgence when pushed beyond their limits.

The most hilarious authentic comedy of the year, “Bad Moms” stars Mila Kunis, Kristen Bell (played Anna in “Frozen”) and Kathryn Hahn, written by Jon Lucas and Scott Moore who also penned the highly successful “The Hangover” film series. The movie is produced by blockbuster maker Suzanne Todd, who is behind worldwide hits such as “Alice In Wonderland” and “Austin Powers” movies.

“Bad Moms” sees Amy (Kunis), leading a seemingly perfect life – a great marriage, overachieving kids, beautiful home, stunning looks and still holding down a career. However she’s over-worked, over committed and exhausted to the point that she’s about to snap. Fed up, she joins forces with two other moms, Kiki (Bell), a stay-at-home mom and Carla (Hahn), a single mom who all go on a quest to liberate themselves from conventional responsibilities, going on a wild un-mom like binge of freedom, fun and self-indulgence – putting them on a collision course with PTA Queen Bee Gwendolyn (Christina Applegate) and her clique of devoted perfect moms, Stacy (Jada Pinkett Smith) and Vicky (Annie Mumolo). 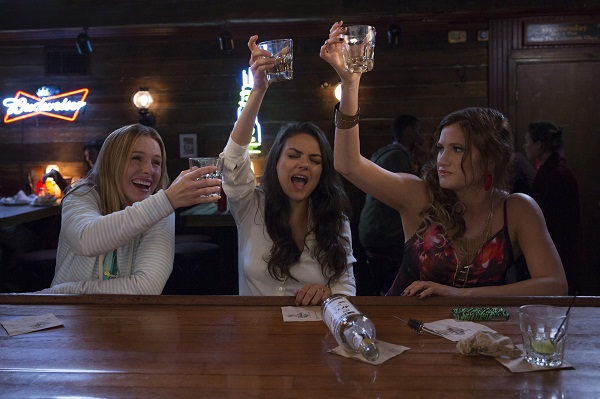 Producer Todd, who is also a working mom hopes that multi-tasking mothers and those around them will take cues from “Bad Moms” on indulging themselves of the much needed breaks every now and then. “Obviously, I’m a working mom and I’ve always been, so I think that all moms are very hard on themselves,” she said. “In the movie, we get to take that on in a real way. I hope that people will go see this movie and come out of it and feel a little differently about themselves and the world or maybe they will feel like ‘I am doing a good job.’”

Likewise, Kunis further echoes Todd’s thoughts, “I think people like to know they’re not alone. And I think that the second you’re like, “Oh wait,” it’s something you can poke humor at and make light of. I think before, when my parents were raising my brother and I, everything had to look perfect. Whether it was or wasn’t you just didn’t air your dirty laundry so to speak. And I think nowadays, if it’s going wrong I call my best friend like, “I don’t know, there’s this color coming out of her nose and I’m pretty sure she’s dying.” It’s okay to do that now and I don’t think it necessarily was okay before. So I think this movie kind of brings light to that.”