National Geographic Channel (NGC) has announced unprecedented plans to premiere critically acclaimed film BEFORE THE FLOOD commercial free across digital and streaming platforms around the world as part of the network’s continued commitment to covering climate change.

BEFORE THE FLOOD, the climate-change feature documentary produced and directed by Academy Award-winning filmmaker Fisher Stevens alongside producer, Academy Award-winning actor, environmental activist and U.N. Messenger of Peace Leonardo DiCaprio, will be shown commercial free on NGC in the Philippines on October 30 at 8 PM. The Philippine premiere of the film is on the same day as its global television premiere on Sunday, October 30, at 9 PM ET/8 PM CT on NGC in 171 countries and 45 languages.

Hailed by critics, BEFORE THE FLOOD will be made available for free across a record number of digital and social platforms for seven days, from October 30 through November 6. This includes Natgeotv.com, VOD/Video On Demand (through MVPD set-top boxes), MVPD Sites and Apps, Nat Geo TV Apps (iPhone, iPad and Apple TV, Roku, Android phones, Xbox One and 360, Samsung Connected TVs), iTunes, Hulu, YouTube, Facebook, Twitter, Amazon, Sony PlayStation, GooglePlay and more.

In addition, at the end of the film, viewers will get a five-minute sneak peek at MARS, from executive producers Brian Grazer and Ron Howard, a global-event series that tells the epic story of mankind’s thrilling quest to colonize Mars, premiering Nov. 13 at 9 PM on NGC in the Philippines. 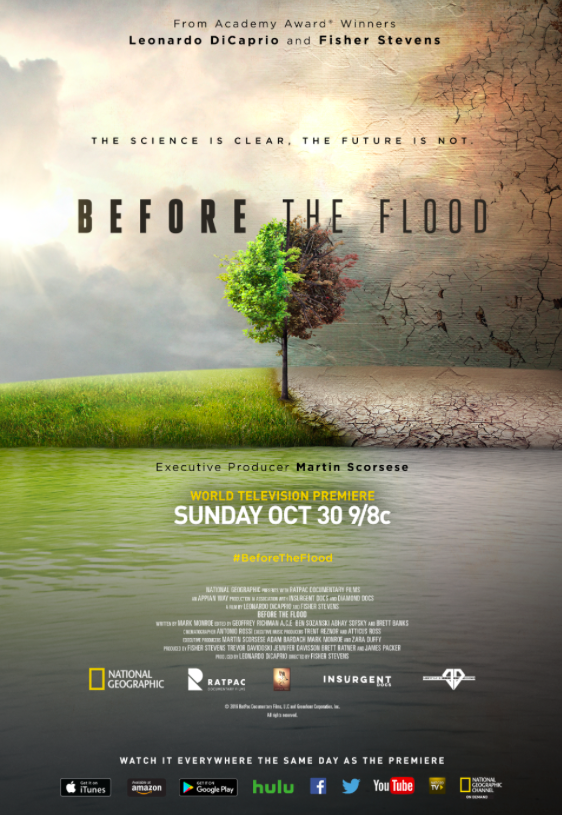 BEFORE THE FLOOD presents a riveting account of the dramatic changes now occurring around the world due to climate change as well as the actions we as individuals and as a society can take to prevent catastrophic disruption of life on our planet. The film also explains real, practical solutions to help save the planet. DiCaprio interviews individuals from every facet of society in both developing and developed nations who provide unique, impassioned and pragmatic views on what must be done today and in the future to transition our economic and political systems into environmentally friendly institutions.

DiCaprio said, “Fisher and I set out to make a film to educate people around the planet on the urgent issues of climate change and to inspire them to be part of the solution. I applaud National Geographic for their commitment to bringing this film to as many people as possible at such a critical time.”

Stevens added, “The level of support National Geographic is providing to create awareness about climate change is exactly what Leo and I were looking for when we made this film. Climate change is real, and we are feeling its effects more and more every day; it’s time we stop arguing its existence, and do everything we can to bring this issue to the forefront of people’s minds so that real action is taken to combat climate change.”

The feature documentary was also an official selection at the Toronto Film Festival, London Film Festival and Hamptons International Film Festival. Recently, BEFORE THE FLOOD was screened at the White House as part of the South By South Lawn event on October 3 and at the United Nations on October 20, hosted by U.N. Secretary-General Ban-Ki-Moon with U.S. Secretary of State John Kerry participating in a Q&A session.

To bring visibility to the film BEFORE THE FLOOD and to the urgency of taking action to combat climate change, NGC has also launched a social activation campaign, prompting fans to “Take Action #BeforeTheFlood.” For every use of #BeforeTheFlood and/or the phrase “Before the Flood” across Facebook, Twitter and Instagram and every use of the BEFORE THE FLOOD custom Snapchat geo-filter during select film screenings within the promotional period of Oct. 24 through Nov. 18, National Geographic Channel and 21st Century Fox will together donate $1 to Pristine Seas and $1 to the Wildlife Conservation Societyfor a total of up to $100,000 ($50,000 to each organization).

Trent Reznor and Atticus Ross, Gustavo Santaolalla, and Mogwai created the music for Before The Flood. Acting as music supervisors for the first time, Reznor and Ross worked in tandem with Santaolalla and Mogwai to compose a blend of music with a cohesive vision, resulting in the score for the film along with a soundtrack that has been released through Lakeshore/Invada Records. The soundtrack is currently available exclusively at Apple (http://smarturl.it/amtbam) and will be available at all digital retailers and streaming services on October 29th. The 3xLP vinyl version is available for preorder as well at http://smarturl.it/BeforeTheFlood.

Charo Espedido, Director and Head of Marketing at FOX Networks Group Philippines, said, “Climate change is a pressing issue that NGC has consistently been covering in the channel’s featured programming, and it has been a focal point in local audience engagement initiatives such as our annual Earth Day Run. We take our role of spreading the urgent message of Before The Flood among our viewers seriously, making it available to them without interruption so that they may fully absorb the importance of these discussions and be spurred into action.”