From day one the presidential campaign of Rodrigo Duterte has been anchored on one simple promise change. It has been a battle cry that never failed to ignite deafening cheers and even elicit some heartrending tears from his supporters who are pinning all their hopes on a new administration.

Now that President Duterte has been finally sworn into office, change has indeed come.

For the first time, re-experience the dramatic and emotional journey of Mayor Rodrigo Duterte through the songs that perfectly encapsulate his messages of hope and change throughout the campaign period.

“The previous election was all about crime, corruption and drugs that are threatening a whole generation of Filipinos and the very security of our nation. That is why people wanted a leader who had the political will, personal courage and leadership who can make a difference. Besides being used during the campaign, each song in the album was carefully chosen for conveying the same message of President Duterte,” says Barney Borja

“Majority of the songs in the album were produced by the songwriters and artists at their own personal expense to help then Mayor Duterte’s presidential campaign,” Borja added.

The album includes 9 original compositions all equally capturing the message of President Duterte’s message of change and hope.

Heading the list of featured OPM artists is Freddie Aguilar, who is best known for his international hit song “Anak,” which even President Duterte admits was one of the songs that inspired during his youth to change for the better. Aguilar was the first artist to sign up for the project.

To capture Duterte’s brand of leadership and the Filipinos deep longing for change, The King of Pinoy Folk Songs, rewrote the lyrics of his iconic song “Ipaglalaban Ko” into “Duterte Para Sa Tunay Na Pagbabago.”

In 1986, Aguilar’s rendition of “Bayan Ko,” became the anthem of the opposition against the Marcos Regime and the People Power Revolution. Thirty years later, Aguilar was once again able to awaken the voters sense of patriotism to choose Duterte.

President Duterte says he considers Aguilar one of his favorites because he is a “singer with a social conscience” whose songs have inspired Filipinos to love the country. “That guy is a nationalist. His love of country shows in the way he uses his songs, which are always about corruption and what ails this country the social injustice,” Duterte said in one of his previous interviews. 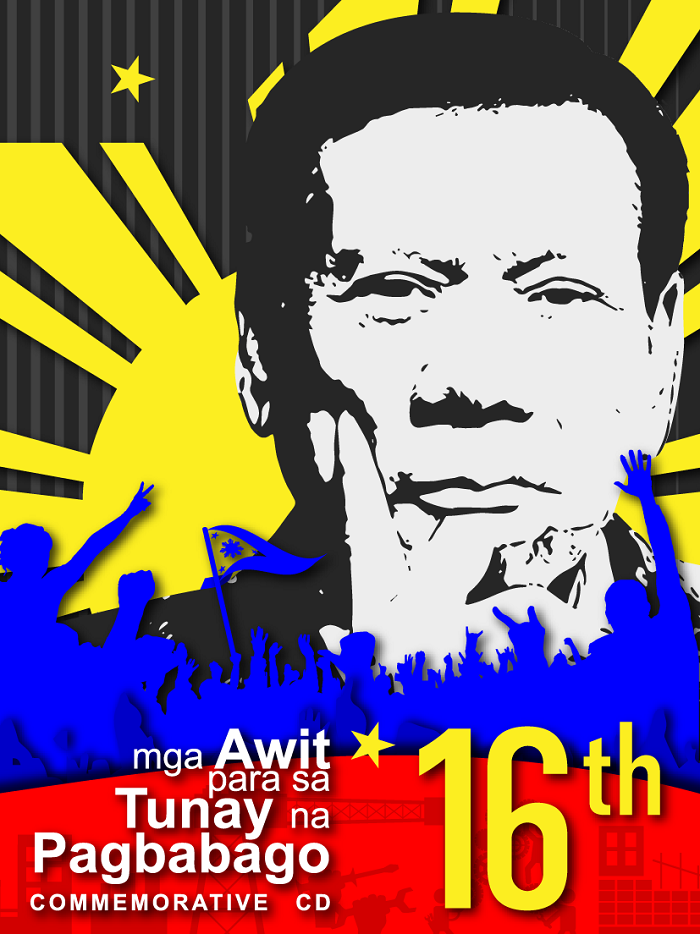 Cesar Montano strums his guitars to his melodic composition “Tunay Na Pagbabago” with music by Dominic Benedicto, and Rap Lyrics by Jeff Tam.

Equally controversial as they are talented, Mocha Uson and the Mocha Girls rap their way through the powerful lyrics written by Maverick Guzon in another piece with the same title “Tunay Na Pagbabago”

The album, Barney Borja said already has the blessings of President Duterte.

In keeping with the theme of change, proceed from the sales of the album will be used to help fund rehabilitation services for drug dependent youths in line with the new administration’s war on drugs.

The album launch was held on July 11, 2016 at the Ka Freddie’s Bar and Restaurant in Tomas Morato Quezon City and was attended by Freddie Aguilar, producer Barney Borja, composers LJ Manzano and Ian Sison and Atty. John Paul Amores Chairman of the KaUsaban Foundation.