For the first time in the history of Philippine boxing, arguably two of the most iconic names in the ring are set to fight back to back against the world’s rising stars in “The Legend Vs. The Champ.” Eight-division champion Emmanuel “Manny” Pacquiao is set to join WBO Super Bantamweight champion Nonito “The Flash” Donaire in the much-awaited sporting event happening on November 6 at the Thomas and Mack Center in Las Vegas, Nevada and to be beamed live in the Middle East, exclusively by The Filipino Channel (TFC) and Top Rank Inc.

In this corner of the world, Pacquiao also called Pacman, is returning to keep the spirit of Philippine boxing in the world arena, alive. Dubbed People’s Champ for bringing pride to the Philippines in his illustrious 21-year boxing career, Pacquiao is set to raise the flag of pride once again as he faces World Boxing Organization (WBO) welterweight champion Jessie Vargas in the battle fittingly dubbed “The Legend Vs. The Champ.”

For the first time, co-fighting in the main event is four-division champion Donaire, who will face the undefeated Jesse Magdaleno in the title fight in a bid to sustain his WBO Super Bantamweight crown. 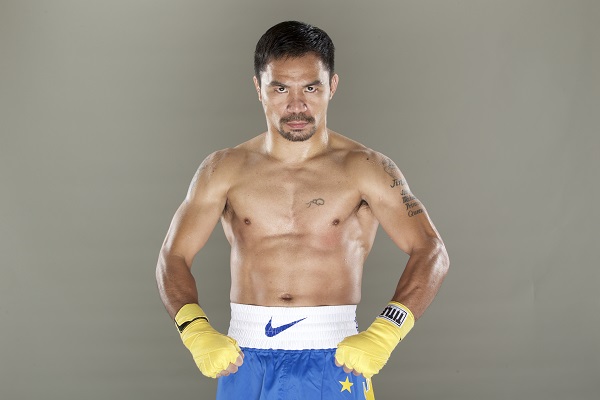 According to Top Rank Boxing Founder and Chief Executive Officer (CEO) Bob Arum, given the Filipino’s propensity for boxing, it was not long before this idea came to fore and Pacquiao and Donaire were the easy choices. In an interview with “Balitang America’s” Bev Lorente, Arum said: “We are looking to do something really spectacular for all Filipino people.”

Pacquiao (58 wins-6 losses-38 knock outs), took an early retirement after his much-celebrated fight versus Floyd Mayweather Jr., sprang back to the boxing area to prove that it is not over until it’s over. Bringing with him courage and speed, he is facing boxing’s rising star Vargas (27-1-10), armed with power and aggression.

In an interview by TJ Manotoc via ABS-CBN Sports + Action, sports analyst Ronnie Nathanielsz said even after having taken a respite Pacquiao still has ‘it.’ “Manny is still good, there is no question about it. He is still an attractive fighter, a heavy puncher, moves very well and he has got charisma,” Nathanielsz said. Nathanielsz added: “Manny is two punches too hard, moves too hard and has got too much speed for Vargas.”

Meantime, Donaire (37-3, 24 knock outs) stands to face his toughest match ever against undefeated Magdaleno who has 23 wins, 0 losses and 17 KOs under his belt.

In an interview with Steve Angeles of “Balitang America,” Arum said that the Pacquiao – Vargas fight is much awaited, the Donaire – Magadaleno match may steal the show.

Arum explained: “Nonito, we know what a warrior he is. Magdaleno is a hungry fighter, undefeated. I’m proud of that fight. I think it’s going to be a terrific fight. I think every one of these fights is going to be evenly matched but I can see where people are saying Donaire and Magdaleno, two guys that live in Vegas probably will be a barn burner.”

Don’t miss this history-making sporting event on November 6 at 4 a.m. in KSA and 5 a.m. in Dubai, live (with replays) via TFC.tv.

PPV subscription is at SAR and AED 80. “The Legend Vs. The Champ” is also available via OSN, ELife and Mozaic TV Powered by Ooredoo.