When the Perkins Twins Jesse and Christian Perkins, released their newest album “Can’t Stop” under Universal Records, they began a unique love story with their fans who found a connection through their music.

Now, the Filipino-American pop twin brothers, takes the romance further with a series of mall tours as they perform their songs live and meet up with their avid supporters.

Jesse explains, “We decided to name our new album, ‘Can’t Stop’ because it reflects the concept of never quitting and always giving our best through hard work in everything we do. It is also expresses the kind of relationship we have with our fans. They are the reason why we are enjoying this success, and we will be forever grateful for them and we just Can’t Stop thanking them all.”

“We wanted to write songs that are positive and also songs that young people can relate to. They reflect experiences, either directly or those we have experienced vicariously through our friends and family,” Jesse further shared. 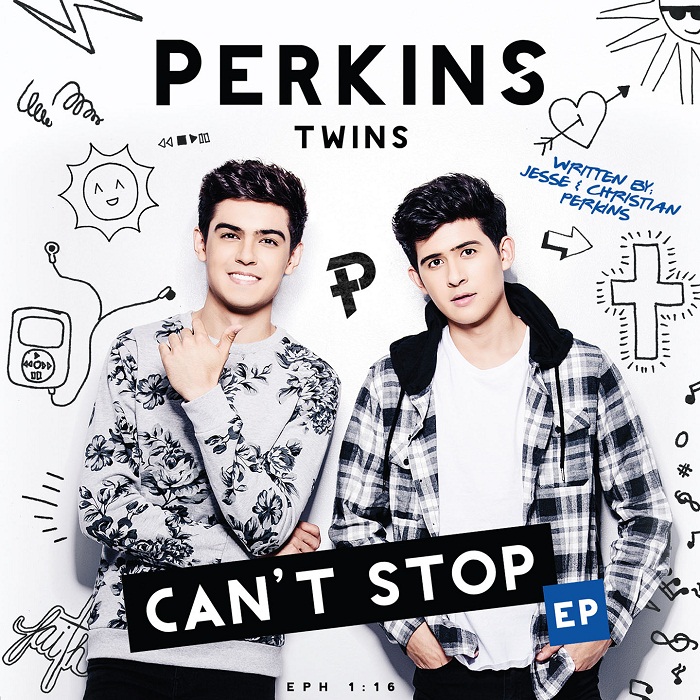 The first single “Can’t Stop” was one of the first songs the twins wrote for the album. Christian recalls how they came up with the song, “We wanted to write something that young people can really relate to. We tried to capture the feeling of how it feels to be in love and the joy that almost supernaturally comes along with it. When you’re in love, you can’t stop thinking about that special someone, and that’s what the song is about. There is a subliminal message there for the love of Jesus as well.”

In the music video, Christian and Jesse were joined by the beautiful Claudia Baretto in a story of young adults discovering one’s true love.

“Making our first music video was an awesome experience. We were allowed to create the concept for the story line. We wanted a fresh looking female lead in the video and we were blessed to have Claudia join us. She was a pleasure to work with” Jesse said.

With sumptuous intertwining harmonies, the duo underscores five of their original compositions and one Tagalog song written by Kiko Salazar. “Kung Aamin,” the only Tagalog song in the album was described by the twin pop act as ‘very emotional’ and ‘soulful.’ Jesse also adds, “We love singing Tagalog songs! What’s bizarre is that we sing Tagalog quite naturally; probably more naturally than when we actually speak Tagalog.”

The brothers first broke through into mainstream in 2015 when they released their debut album with original Tagalog songs by Vehnee Saturno. Inspired by their diverse musical influences, ranging from the Beach Boys to Justin Timberlake, the Perkins Twins pop tunes have been described as “fresh and connected.” Soon after, they were signed with Universal Records and released the twin’s new album produced by Ito Rapadas.

Born in the Philippines and raised in California, the 18-year old twins prove that there is no rule book that needs to be followed when it comes down to success. “We loved music growing up in California. Our family always sang in the house and in the car. We sang in the church choir when we were younger. But we never performed in public nor considered singing as a career and we were discovered as singers quite by accident,” Jesse shared.