Read about the private life of Digong, his family, and leadership style, and get a glimpse of what his presidency would look like in this important feature with photos from master lensman Edwin Tuyay.

Said to be ‘crazy’ with his impossibly ostentatious choices in life, megabucks ‘celebrity scents’ businessman Joel Cruz shows us completely the opposite he shares how to create a life that is successful and happy with his four beautiful kids. Starstudio also shares with you an exclusive tour of his four mansions in Manila, Tagaytay, Baguio, and the United States, his yacht, and his many big and fancy pursuits. 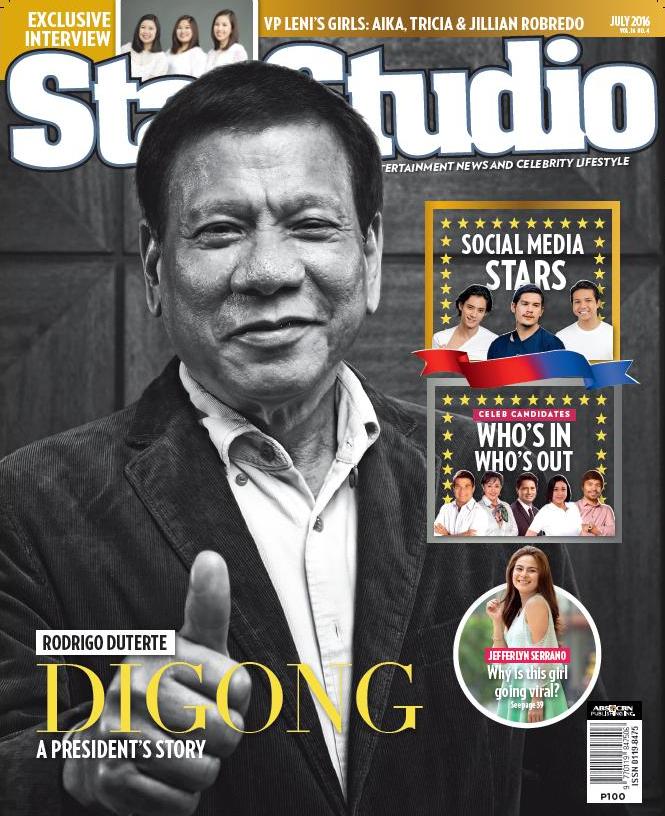 In line with the recent election, StarStudio also features the captivating cuties who instantly won the hearts of many. Among those who stole the hearts of the people are Sebastian “Baste” Duterte, Brian Poe Llamanzares, Paolo Roxas, and Luis Hontiveros.

Also read the fun and cool exclusive feature on vice president Leni Robredo‘s daughters: Aika, Tricia, and Jillian as they share their family life and thoughts about the possible changes they’ll face in the next six years.

All these and more in StarStudio Magazine’s July 2016 issue, available from ABS-CBN Publishing.

ABS-CBN Publishing, Inc. (API) is the magazine media and book publishing arm of ABS-CBN Corporation. It is the publisher of leading locally-developed magazine titles such as Metro, Metro Society, Metro Home & Entertaining, Food, Starstudio, Working Mom, Chalk, and Vault. Since 2011, API’s brands have had the distinction of garnering six Asian Publishing Awards, the most of any Philippine publisher.