The text-serye that spurred a social media phenomenon and Star Cinema’s official entry to the 2016 Metro Manila Film Festival, “Vince and Kath and James” is set to screen in key cities worldwide via [email protected]

The story of “Vince and Kath and James” is an adaptation from the text serye that became popular over social media sites. Star Cinema brings together this generation’s most promising stars Julia Barretto, Joshua Garcia and Ronnie Alonte to give life to the key characters.

The narrative revolves around the series of text messages being sent by Garcia in the hopes of earning Barretto’s nod for Alonte. However, instead of focusing on the exchange of text message, the director of the film Ted Boborol, explains that he focused on giving life to the story happening behind the exchange of messages.

Boborol, the director behind the blockbuster movie “Just The Way You Are” and TV sensation “Forevermore” and “Be My Lady” explains: “Faithful siya sa story, it’s just that we explored more on what happened behind those exchange of text messages – kung anong buhay nila,” he explains. “What interests me is lahat tayo nag-communicate via text, yet it’s subject to interpretation and we are not sometimes truthful to our text.”

Truth be told, in “Vince and Kath and James” Garcia and Barretto are the worst of friends, since the former often teases the latter whenever they see each other. What Kath doesn’t know is that Vince secretly has feelings for her.

Things get complicated when James asks Vince to pretend to be him and send Kath pick-up lines via text messages. The pretension even becomes more challenging because Vince finds himself falling more and more in love with Kath. However, to give way to his cousin James, Vince keeps his feelings at bay. 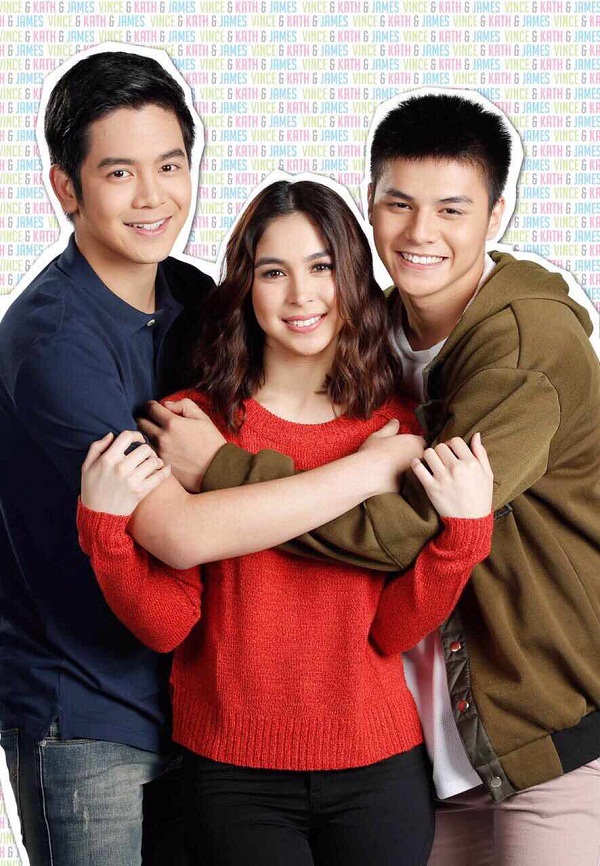 Boborol shares that they also put into consideration the younger generation’s immersion in technology, especially in text messaging and social media. “I realized na kids nowadays, the millennials as how they’re called, live in filtered lives. We only post what’s beautiful for us. So what interests me is, paano nga ba sila ma-in love? Paano nga ba ma-in love ang isang millennial kung puro sila filter?” he teases.

All the three lead stars of “Vince and Kath and James” all agree that in this time when everyone seems to be technology-dependent, people forget to be true to their selves, like how Vince forgets his own feelings for James.

Barretto notes that the youth sometimes forgets the importance of strong family ties, especially with their parents. “Family is a big factor in every situation in life. Friends, boyfriends, girlfriends, they come and go. But your family, your parents, they stay forever. And they only want the best for you,” she says.

“Vince and Kath and James’s” different attack on conveying the story of the youth or often referred to as millennials, is what made the committee of the 2016 Metro Manila Film Festival consider the film in this year’s film festival. “The MMFF committee said the film is a ‘reinvention of the teen genre,’” recalls Boborol on the committee’s description of their film.

While it is the MMFF entry, the movie will not only be seen by Filipinos here in the Philippines but also Filipinos overseas as “Vince and Kath and James” will screen in key cities worldwide via [email protected]. This is good news for the lead cast of the film, especially for Alonte because he has relatives abroad. “Hindi na nila kailangan umuwi ng Pilipinas, mapapanood na nila doon ‘yong pelikula,” Alonte enthusiastically states.

Find out how the widely popular term “#NoFilter” which means there are no editing involved, becomes applicable not only in photos but also in the lives of three teenagers in the movie “Vince and Kath and James” as it screens via [email protected] on December 29 in Papua New Guinea and in UAE, Qatar, Bahrain and Oman; and December 30 in the U.S. and Saipan.