Eight Kapamilya idols will show their grit and prove they can do anything to entertain viewers in the newest talent-reality show “I Can Do That,” which premieres on March 11 on ABS-CBN.

The show will test the will and imagination of I CANdidates, including actress and jiu jitsu enthusiast Cristine Reyes, actress and in-demand cover girl Arci Muñoz, singer-actress Sue Ramirez, and host-comedienne Pokwang, as they perform unique talents that could be hilarious, nerve-wracking, or simply extraordinary.

The Philippine version of “I Can Do That” will be hosted by Robi Domingo and Alex Gonzaga.

Every week, the I CANdidates will perform extraordinary acts in pairs. The fun begins when different groups of professional performers demonstrate a variety of acts that I CANdidates have never done before.

If the I CANdidates think they can do a certain act, they will make their way down the stairs towards the performers. The first to reach the fourth and last step will be locked in to perform the act and will get to choose the I CANdidate who he or she believes will help him or her give a winning performance.

Given only one week to practice, the I CANdidates should be able to perform their assigned act and entertain the audience.

The weekly winner will be determined based on the combined scores culled from the scores given individually by the iCANdidates and the extra points granted to the winner of the audience vote.

So far, the rehearsals have immensely challenged the I CANdidates physically and emotionally. In fact, Daniel got hit by the props he was required to use for an act. 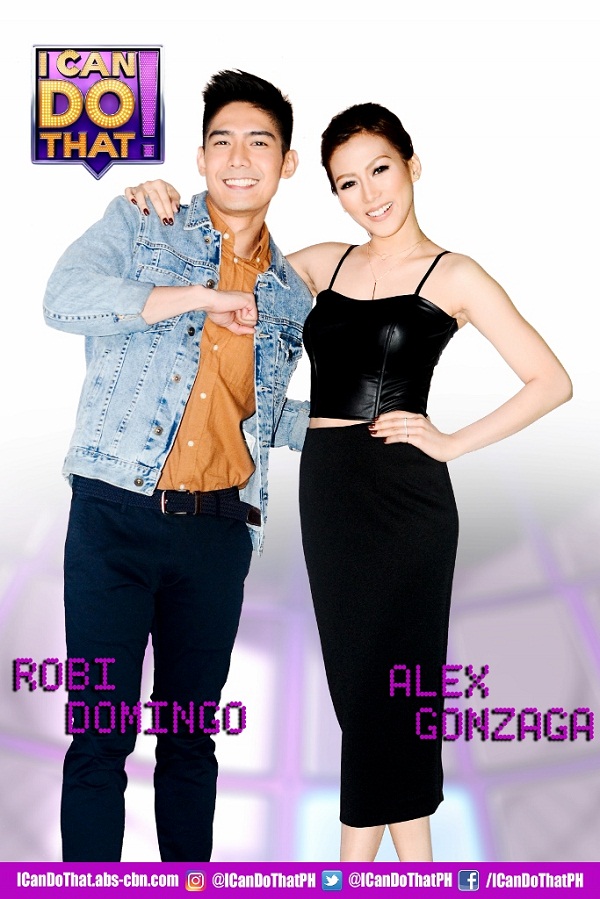 I Can Do That hosts Robi Domingo and Alex Gonzaga

“I Can Do That” was developed by Israel’s Armoza Formats, with local versions in 20 countries, including the United States, which named singer Nicole Scherzinger its first Greatest Entertainer.