The premiere of AXN’s highly anticipated Asia’s Got Talent Season 2 topped ratings among all regional Pay TV channels in the Philippines, Malaysia, and Singapore collectively during the show’s debut on Thursday, October 12, 2017 at 8:30pm.

Billed as the biggest talent competition in the world, Asia’s Got Talent features some of the region’s most breathtaking, jaw-dropping, and mind-blowing performing artists competing for the coveted winning title and a USD100,000 grand prize. The premiere episode was a kaleidoscope of quirky characters and stunning talents, with many acts winning the hearts of judges David Foster, Anggun, and newcomer Jay Park. In a surprise twist, Jay was the first judge to push the Golden Buzzer for the Kyrgyz dance group ADEM whose animated performance racked up 10.2 million views on AXN Asia’s Facebook page in just four days.

In the Philippines, the Asia’s Got Talent premiere improved the timeslot average by seven times and secured AXN at #1 in its timeslot, commanding a 60 per cent share among 21 English General Entertainment channels.

In Malaysia, Asia’s Got Talent took the spotlight as the #1 English program of the day on pay-TV, outperforming the season one premiere rating by 50 per cent. AXN dominated the timeslot with a 49 per cent share across 11 English General Entertainment channels. 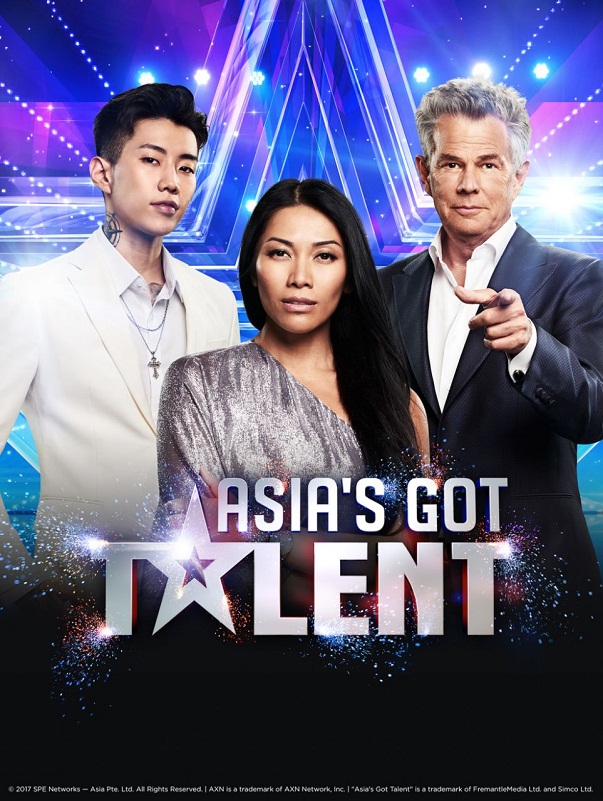 In Singapore, Asia’s Got Talent led the ratings chart in its timeslot among all English Pay TV channels, delivering a strong 128 per cent growth versus the timeslot average.

“Asia’s Got Talent is the only show in the world that unites the region in a celebration of vibrant cultural diversity and breathtaking talent that truly shines. We’re proud to provide such an incredible platform on AXN in which to showcase a whole new generation of talent and are thrilled to have the support of our Asian viewers to help launch the next global superstars,” said Virginia Lim, Senior Vice President and Head of Content, Production and Marketing, Sony Pictures Television Networks, Asia.

Each act competing in Asia’s Got Talent will have to receive at least two “Yeses” from the esteemed celebrity judges,comprising 16 time Grammy-winning Canadian musician David Foster, Indonesian rock icon Anggun, and Korean American singer/rapper Jay Park. The three judges must select the most dazzling performances from thousands of hopefuls hailing from 15 territories across Asia. Those who make it to the semi-finals will contend with the ‘fourth judge’, AXN viewers who will ultimately decide the winner of Asia’s Got Talent.

Asia’s Got Talent spans 10 weekly episodes, including five audition episodes, three semi-finals, a finale episode and a results gala. Connect with the judges, hosts, and your favorite contestants through videos and photos on Asia’s Got Talent Facebook, Instagram and YouTube platforms. #AsiasGotTalent

Asia’s Got Talent is the 67th adaptation of the GuinnessWorldRecord-breaking hit “Got Talent” format, which was created by Simon Cowell’s Syco Entertainment and is co-produced by Fremantle Media. The “Got Talent” format is officially the most successful reality TV format in history and currently airs in 186 countries.

In the Philippines, Asia’s Got Talent is brought to you by CheriferTangkad Sagad!, KFC Delivery, and Vivo Smart Phone.

Asia’s Got Talent Season 2 broadcasts every Thursday at 8:30pm on AXN.

Team Orange 26 Feb 2021 0 comments
A year into the quarantine and most Filipinos turned to one thing that kept them updated, connected and entertained: the internet. From learning a new recipe to participating in “new…

Team Orange 25 Feb 2021 0 comments Arts & Cratfs
Culture enthusiasts from all over the metro enjoyed a weekend filled with beautiful art, antiques, and home décor, along with other exciting activities during the “Flea Market at Palacio de…