One minute is all it takes to help save millions from breast cancer.

This is the message that Avon Philippines is highlighting as the company launches its 2017 Kiss Goodbye to Breast Cancer (KGBC) campaign, in observance of Breast Cancer Awareness Month in October. KGBC is now on its 15th year in the Philippines.

This year, Avon Philippines’ KGBC campaign focuses on the importance of taking a “Pink Minute” to make breast self-examination (BSE) a part of every woman’s habits.

“Through all the years that Avon has been actively participating in this global campaign against breast cancer, we have come to learn that breast cancer can hit everyone – male, female, young, and old,” said Faith Fernandez-Mondejar, Avon Philippines Director for Communication, Asia Pacific and Philippines. “Through Pink Minute, we want everyone to try and save as many as they can, starting with themselves, by making breast self-examination a habit.” 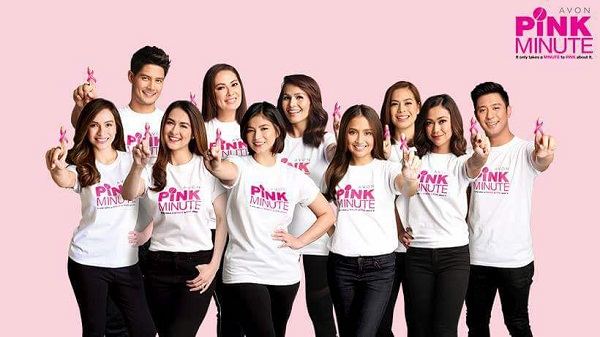 The Pink Minute campaign kicked off with a series of teaser videos prior to October. The videos featured Avon celebrity ambassadors Marian Rivera, Angel Locsin, Kathryn Bernardo, Jennylyn Mercado, Daniel Matsunaga, Rocco Nacino, Ruffa Gutierrez, Bettina Carlos, Jodi Sta. Maria, and Iza Calzado who all encouraged the public to “pink about it” and do BSE. In the main video, cancer survivors joined the celebrities in driving home the message that “1 minute can save millions.”

The video can be viewed publicly online via Avon Philippines’ website www.avon.ph, YouTube and Facebook pages, as well as KGBC 2017 Facebook page. Complementing the online video campaign are the Pink Minute bud ads and LED screen placements along EDSA and C5.

Philippine Cancer Society, Inc. (PCSI) Executive Director Dr. Rachael Rosario emphasized during the campaign launch that while breast cancer has yet to find a real cure, early detection through BSE is the closest thing to enabling women to win the fight against the disease . PCSI has been a long-time partner of Avon’s KGBC advocacy, with the Avon-Philippine General Hospital (PGH) Breast Cancer Center as the beneficiary.

The Pink Minute campaign supports Avon’s global Breast Cancer Promise, a renewed multi-year commitment to educating women about breast health that builds on its legacy of supporting the breast cancer cause. Avon globally will work with a host of educators, partners, health organizations, and experts to deliver greater public awareness of breast cancer and make sure every woman knows how to take action.

“The Breast Cancer Promise strengthens our commitment to helping save women’s lives,” said Agnieszka Isa, Executive Director for Marketing. “We believe that no woman should succumb to the disease because she didn’t know about it or didn’t have access to information about it.”

During the launch, Avon also presented the facts that came out of the recent Avon’s global survey, which involved 19,000 women respondents. The survey revealed that 73% look out for changes in their breasts, although they are not confident as to what signs lead to breast cancer. The respondents revealed their lack of knowledge about breast cancer, with 30% saying they haven’t received any information about the illness. In fact, 25% of the respondents believe a lump is the only sign of breast cancer that can be detected without using any medical device. When asked if they would go for a medical advice for a check-up, 60% of them said they would hesitate for reasons such as embarrassment, fear, and lack of access to a doctor.

Aside from raising awareness around the importance of early detection in defeating breast cancer, Avon Philippines’ Pink Minute also aims to raise funds and provide free consultation to women in the whole month of October. Those who wish to know more about how to properly execute BSE, get free consultation, and know more about breast health may dial the Pink Minute hotlines 0917-155PINK (Globe) and 0928-524PINK (Smart).

Since its launch in 2002, Avon Philippines has raised close to Php 24M through product sales, donations, and walk/run events in support of the advocacy program. This year, Avon’s Sweet Honesty Promise Eau de Toilette Spray and pedometer watch are the participating products for the fundraising.