Walt Disney Records’ “Beauty And The Beast” Original Motion Picture Soundtrack climbs its way to the top of the charts, barely a week after the opening of its live-action remake. The soundtrack is currently charting on several digital platforms in the Philippines:

o No. 8 – “How Does A Moment Last Forever (Montmarte)” by Emma Watson

o No. 40 – “Beauty And The Beast” by Ariana Grande and John Legend 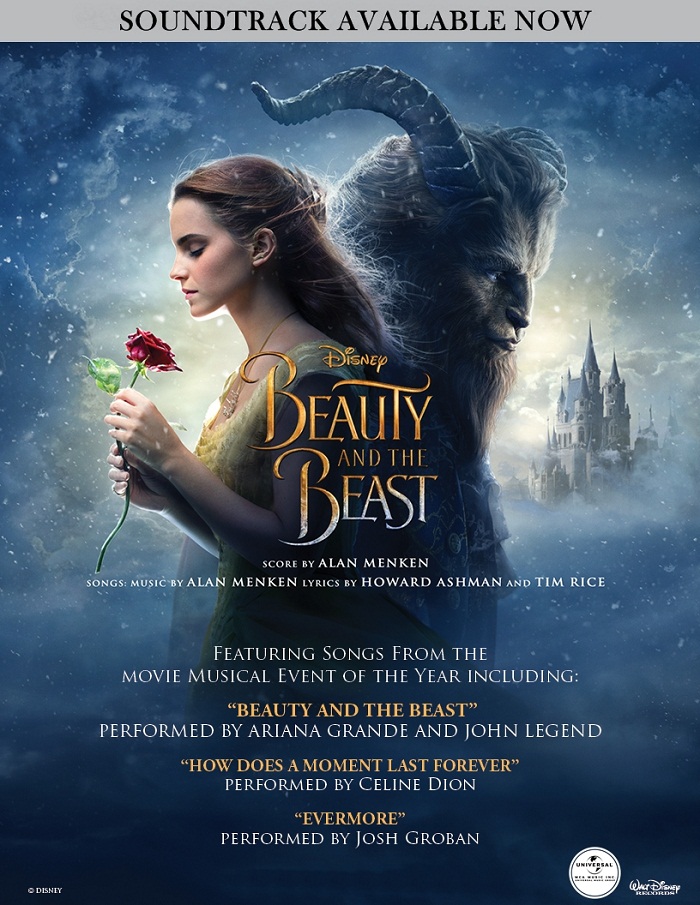 Eight-time Oscar®-winning composer Alan Menken (“The Little Mermaid,” “Aladdin”) provided the film score for “Beauty And The Beast,” as well as new recordings of the classic songs from the animated film written by himself and Howard Ashman. These new recordings include “How Does A Moment Last Forever” (Performed by Celine Dion) and “Evermore” (Performed by Josh Groban). “How Does A Moment Last Forever” is an emotional ballad written by veteran lyricist and three-time Oscar winner Tim Rice (“The Lion King,” “Evita”). It’s about holding onto life’s precious moments. Portions of the song are performed throughout the film and interpolated into the underscore before Dion’s full-length version debuts in the film’s custom main-on-end title design. “Evermore,” on the other hand, is a soaring ballad performed in the film by the Beast (Dan Stevens) after he releases Belle (Emma Watson) to be with her father.

Meanwhile, the new rendition of the classic song “Beauty And The Beast” performed by Ariana Grande and John Legend is produced by GRAMMY-winning veteran Ron Fair, whose music career spans 37 years as a major-label record company leader and accomplished producer, arranger, recording engineer and musical director. Fair was brought in to produce by Disney’s President of Music & Soundtracks, Mitchell Leib, who also brought Grande and Legend to the project. The history of collaboration between Leib and Fair in film music goes back to the highly-successful “Pretty Woman” soundtrack. “Ron was the first and only choice to make this particular record,” says Leib. “No one is a better vocal producer and he also has a great understanding of the filmmaking dynamic.” Says Fair, “Stepping into the shoes of an Oscar and GRAMMY Award-winning classic is not small potatoes. But with today’s two greatest plutonium singers – John Legend and Ariana Grande – we are bringing the song back with a new school-old school fresh treatment that shows the soulfulness and power of what a great melody and lyric can inspire.”

“Beauty And The Beast” Original Motion Picture Soundtrack is exclusively distributed by MCA Music (Universal Music Philippines) and is now available in CDs for Php 495.00 at Astroplus/Astrovision stores. Download the soundtrack via Spinnr or iTunes. Stream the music via Spotify or Apple Music. Or listen here: https://VA.lnk.to/BBDeluxeFP.