Cristine Reyes, Daniel Matsunaga, Gab Valenciano, Wacky Kiray Battle For Greatness In “I Can Do That” Grand Finals This Weekend

iCandidates and Great Finalists Cristine Reyes, Daniel Matsunaga, Gab Valenciano, and Wacky Kiray will pull out all the stops to entertain viewers as they compete for one last time to be named the Greatest Entertainer in the “Battle for Greatness: The ‘I Can Do That’ Grand Finals” this weekend (June 3 at 4) on ABS-CBN.

The four stars have been rehearsing non-stop in hopes of clinching victory with their chosen death-defying acts.

Judging their performances are none other than the Queen of Philippine Soap Opera Judy Ann Santos-Agoncillo and King of Talk Boy Abunda. 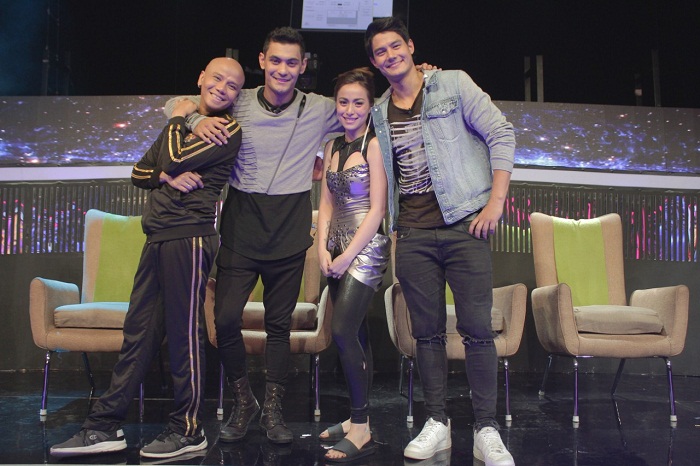 The Greatest Entertainer, who will receive P1 million, will be determined by the percentage of the combined scores of the judges and public text votes.

After all of the performances on Saturday, viewers can start voting for their favorite Great Finalist until midnight. Voting will be reopened on Sunday’s show.

What acts will impress Juday, Tito Boy, and the viewers the most?

“I’m super excited to do this. I’ll do my best to make sure I will win,” said Cristine about her fire dancing act.

Daniel, who is busy rehearsing his aerial pole act, said, “I have a fear of heights. But I want to fight it and win.”

Gab, meanwhile, said that the ring man act assigned to him is “so flawless and perfect, adding, I’m gonna have so much fun with this. Just the mere fact that I’m going to do it, I’m so excited.”

Wacky’s wire balancing act will also guarantee to put viewers on the edge of their seats. He said, “I’m going for the gold. I might be going crazy, and I want to do difficult things. But I want to win for my family and loved ones.”

Aside from the performances of the Great Finalists, hosts Robi Domingo and Alex Gonzaga will also showcase their comedic chops as they try to copy the act of “Funny Ka, Pare Ko” stars at “It’s Showtime” “Funny One” finalists Crazy Duo.

Don’t miss the “Battle for Greatness: The “I Can Do That” Grand Finals” this Saturday and Sunday, 9:45PM on ABS-CBN.