Jessa Zaragoza And Dingdong Avanzado, All Set For Their “20/30 Anniversary Concert”

The Phenomenal Diva commemorates her 20th year in showbiz while The Original Prince of Pop marks his 30th anniversary in the industry.

Joining the couple in their one-night show are guests Xian Lim, Klarisse de Guzman, Lloyd Zaragoza, Daryl Ong, Angeline Quinto, and Ogie Alcasid. Their daughter, up and coming singer Jayda Avanzado, will also surprise the audience with her powerful vocals. 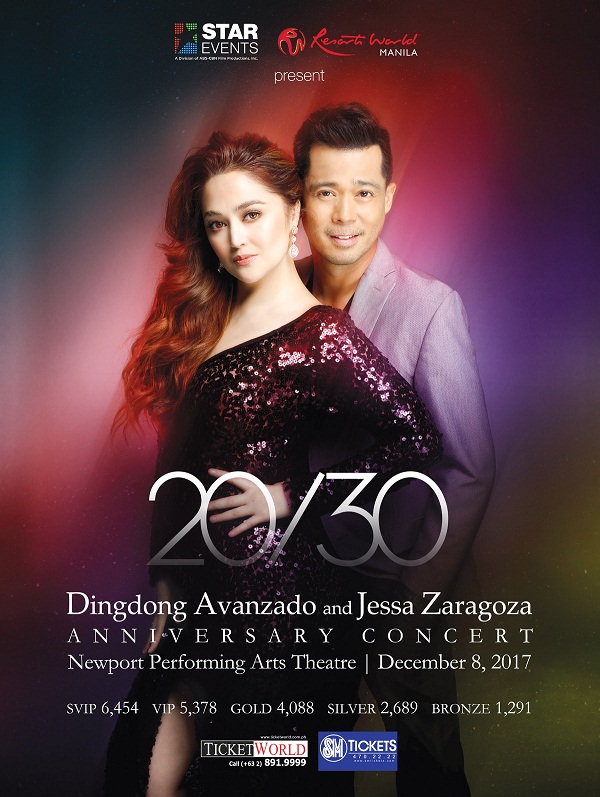 The musical event, produced by Star Events and Resorts World Manila, highlights Jessa and Dingdong’s OPM contribution that have made them a power couple in the industry.

Jessa officially began her music career in 1997 when she released her first ever studio album with the phenomenal eight-time platinum record, largely due to her “Bakit Pa?” hit. She also popularized numerous songs such as “’Di Ba’t Ikaw,” “Ibigay Mo Na” and “Kahit Na Ilang Umaga,” earning her the title “Jukebox Queen of the 90’s.”

Dingdong, on the other hand, ventured into recording ten years earlier with his hit single “Ikaw Lamang” earning him his first gold record. His three-decade career spanned his experience not just as a singer but also as a songwriter, actor, and concert director. Among his biggest hits are the OPM classics “Tatlong Beinte Singko,” “Naghihintay Sa’yo,” “Bakit Labis Kitang Mahal,” and “Basta’t Kasama Kita.”

Join Jessa and Dingdong in their much-awaited show on December 8 (Friday). For more details on the “20/30 Anniversary Concert,” visit Starmusic.ph