A bounty of treats awaits kids and the kids-at-heart from October 19 to November 5, just in time for Halloween as SKY opens its most child-friendly shows via the #Freeskychannels offer.

There’s something to watch for children of all ages, from “My Little Pony” to “Spongebob Squarepants,” “Teen Titans Go,” and “Justice League Action.”

Twilight Sparkle is the smartest pony in Equestria but she does not have any friends so she is sent to Ponyville to learn about it. Together with ponies Fluttershy, Applejack, Rainbow Dash, Rarity, Pinkie Pie, Twilight Sparkle will find out what friendship means, and that magic is stronger with friends. “My Little Pony” airs weekdays at 7:30 AM on Boomerang. 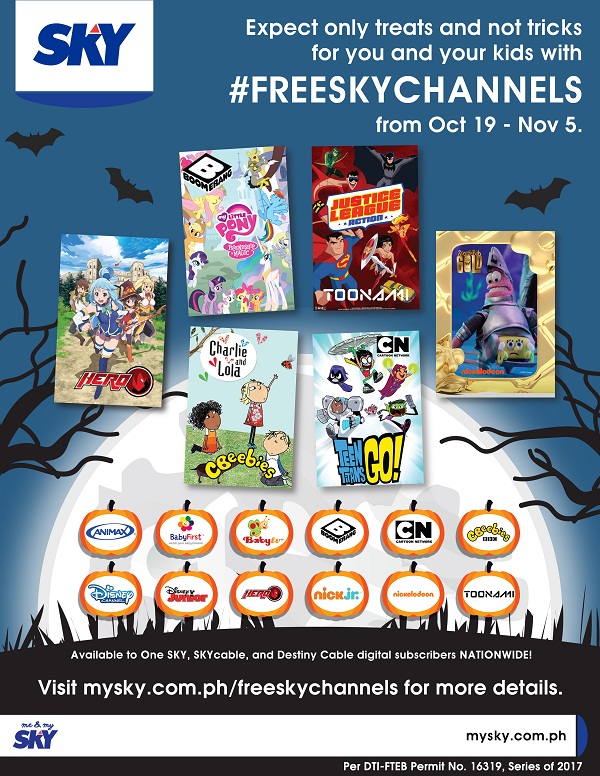 Meanwhile, Spongebob Squarepants and the gang must save Bikini Bottom from a ghoulish Halloween care of the Flying Dutchman in “Spongebob: The Legend of Bikini Bottom.” Watch this stop motion special on October 31, Halloween at1:30 PM on Nickelodeon.

Robin, Starfire, Cyborg, Raven, and Beast Boy, aren’t just superheroes, they’re also teenagers. “Teen Titans Go” follows their adventures in puberty, living with each other, and the occasional crime fighting. Catch them on weekdays at 5:15 PM on Cartoon Network.

On the other hand, “Justice League Action” is about just that, action. It’s Batman, Superman, Wonder Woman and a rotating cast of Justice League members making sure the world stays safe from evildoers. This animated series also features an amazing cast of voice actors including Mark Hamill as the Joker. It’s on from Monday through Friday at 6 PMon Toonami.

Also, watch out for Ceebebies’ “Charlie and Lola” and “Kino’s Journey – The Beautiful World” animated Series on Animax. There’s also “Konusuba” season 2 to look out for on Hero.

These shows and so much more are available for viewing through #FREESKYCHANNELS from October 19 to November 5.There’s no need to register for anything. Just switch on the TV and start tuning in.