Teen Queen Kathryn Bernardo rules over Cinema One this March as Choice Artist starting March 5, highlighted by the much-awaited television premiere of “Barcelona: A Love Untold” on March 12 at 8PM.

“Barcelona” tells the story of Mia (Kathryn), a young woman who escapes from a painful past in the Philippines and is trying her luck to rebuild her life in Spain, where she meets and falls in love with Ely (Daniel Padilla), a young man who cannot get over, his past love.

Catch the cable TV premiere on March 12 at 8PM. 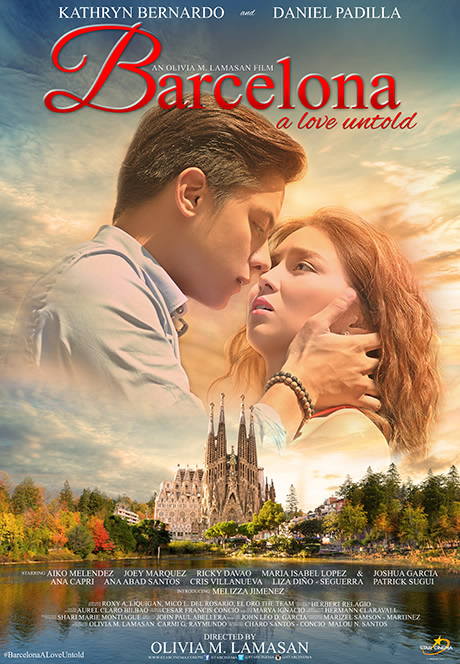 The TV premiere is part of Cinema One’s Blockbuster Sundays which also features other fan-favorites such as Bea Alonzo and Gerald Anderson’s “How To Be Yours” (March 5), Mario Maurer’s “Take Me Home” (March 19), and Alex Gonzaga and Joseph Marco’s “My Rebound Girl” (March 26).

Meanwhile, more of Kathryn’s kilig movies are in store on Romance Central every Sunday at 6PM.

Go back to her first kilig movie with Teen King Daniel Padilla, “Must Be Love”, on March 5 wherein she plays average girl Patchot, who harbors feelings for his bestfriend Ivan (Daniel). Conflict arises when Ivan starts dating Angel (Liza Soberano), Patchot’s cousin from the U.S., but then begins to see Patchot in a new light.

Ready your tissue boxes as Kathryn stars in the rom-com tearjerker “She’s Dating the Gangster,” which airs on March 12. Follow her rebellious character Jackie in “Crazy Beautiful You” on March 19, and relive the “Barcelona: A Love Untold” experience after its TV debut on March 26, Kathryn’s birthday itself.

Cinema One is the country’s number one cable channel known for its amazing line-up of mainstream and independent local and foreign movies, film-related programming, and original content. It is on Skycable channel 56, Destiny Cable Analog 37 and Digital 57.