“REELive the Classics” is part of ABS-CBN Film Restoration Group’s campaign dubbed as “Sagip Pelikula,” in partnership with Power Plant Cinemas, which aims to locally restore classic films and make it available to the general public via different platforms.

The week-long film exhibition was formally opened via the red carpet premiere of the 2006 hit romantic comedy film “Don’t Give Up On Us” attended by no less than its lead star Piolo Pascual and director Bb. Joyce Bernal.

“(ABS-CBN Film Restoration Group) has given so much effort into this project. You have to believe what we fight for and that’s for us to see the classics. It is really for us. I hope we continue to support and value our films so that we can pass them on to the next generation,” sabi ni Piolo.

Aside from “Don’t Give Up On Us,” “REELive The Classics” will also feature three other Judy Ann and Piolo-starrers namely “Kahit Isang Saglit,” “Till There Was You,” and “Bakit Di Totohanin.”

The festival will run from Wednesday (November 8) to Tuesday (November 14) at the Rockwell Power Plant Mall. Tickets cost P250, with a discounted rate of P150 for students. 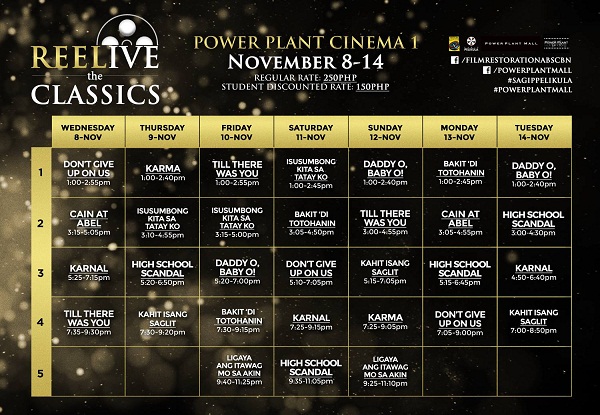