What do you give a woman who has it all? Surprises, of course. As Rogue marks the fourth time Marian Rivera graces its cover, we enlist the brilliant kitchen maverick Bruce Ricketts, the man behind the new Mexican sensation La Chinesca and the personal Rivera favorite Mecha Uma, to conjure dishes that echo the milestones in the actress’s life and career.

After closing several high-profile restaurants, Bruce Lim took a break from Manila’s dog-eat-dog food landscape. But while many thought he had quit the game, the candid chef changed it from behind the scenes. Yvette Tan delves deeper into Lim’s secret success.

Wish You Were Here

What many have called the surfing capital of North Luzon is slowly becoming the country’s next culinary paradise. JJ Yulo drives up to meet the chefs who’ve packed their bags and escaped the bustle of Manila to set up camp in La Union. 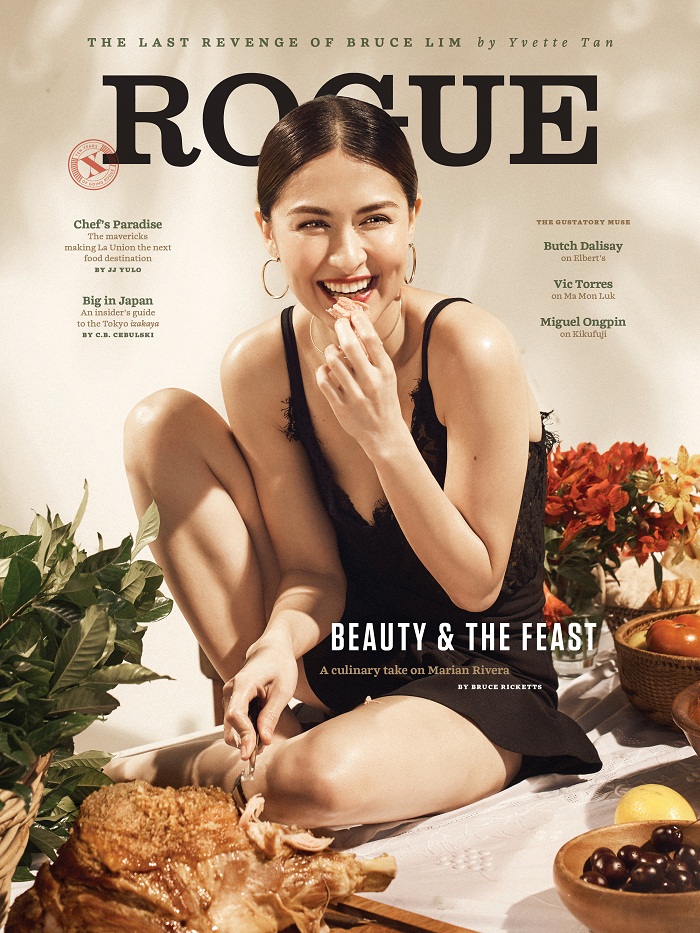 The Trip to Bountiful

In the Cordillera, the word ili is used to denote home. Padmapani Perez introduces us to Baguio-based photographer Tommy Hafalla’s photo compendium of the same name, which shows us just how alive that word is. Through his respectful, almost reverent, lens, we see a rarely-documented reality that is at once tangible and spiritual, communal and reserved: home as both habit and idyll

The Neighborhood is, as per Margarita Forés, #wherechefseat in Hong Kong, and the man behind it, David Lai whose resumé includes the Ritz Carlton in San Francisco and opening Alain Ducasse’s Spoon in the region is all to blame. Rogue talks to the once-under-the-radar chef about cooking for a well-traveled clientele, and where he goes for the most comforting noodles in his city

The United Tastes of America

With the United States more divided than ever, hope has been harder to come by. But as JJ Yulo discovers on a culinary trip through its states and cities, there is still a bright spark to be found in the country’s cuisine and in the people behind it.

Users, pushers, the righteous, the damned all of them are lighting up in an age where drugs have never been more controversial and more accessible. R. Zamora Linmark pens a new story of a nation struggling with addiction and all the drugs in between.

Singapore’s heritage sites breathe new life as the city melds together dining and design; from furniture and upholstery to luminaires and tableware, the Maison & Objet Fair in Paris brings together the best in all things decorative; dualities mark the hybrid furnishings in Poltrona Frau’s latest designer collaborations.

Jose Dalisay, Jr. sneaks us into the sacred spaces of the best (and most difficult to find) steak room in the city; Jose Victor Z. Torres traces the history of Manila’s mami of choice as a cultural icon and a straight up tasty eatery; Miguel Jaime G. Ongpin revisits his favorite haunt in Little Tokyo as rumor’s of the compound’s end break out.