SKY subscribers are in for a huge treat as SKY brings back its #FREESKYCHANNELS promo starting this June. For the whole month, SKY will focus on celebrating champion dads by letting them watch big international sporting events. 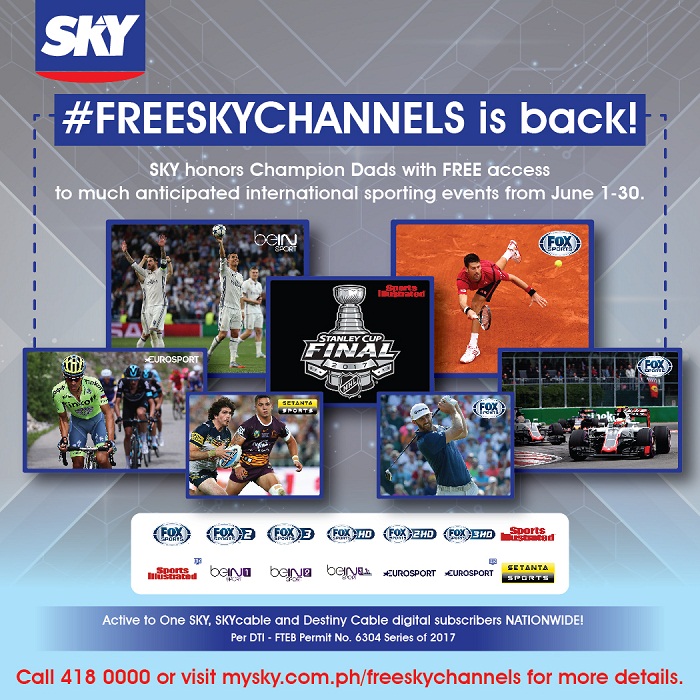 This June, subscribers can check out the tennis grand slam tournaments that are well under way. Fans have a chance to watch the likes of Rafael Nadal, Andy Murray, Caroline Wozniaki, and defending Men’s Singles champ, Novak Djokovic take to the clay courts of the French Open. Also known as the Roland Garros, the French Open is the second of four major Tennis competitions held in a year, the others being the Australian Open, Wimbledon, and the US Open. Djokovic is the first man, since Rod Laver in 1969 to hold all four major titles at once. The French Open is the only tourney played on clay courts and is held in the Stade Roland Garros, named after a much loved French pilot from the 1910’s.

Although tennis superstars Roger Federer, Serena Williams, and Maria Sharapova will not be in competition, viewers can still expect action and excitement as Rafael Nadal goes on a campaign for his 10th Roland Garros championship. Watch him and the rest of the best tennis players in the world play at the French Open, May 28 to June 11 on FOX SPORTS.

Fans can also watch the rest of the NBA finals games on S+A. Viewers will be able to get into the thick of the action as they watch Stephen Curry and the Golden State Warriors challenge reigning champions Cleveland Cavaliers led by Lebron James. S+A is also available in high definition exclusive to SKY.

Golfing enthusiasts will also be able to enjoy the the US Open on Fox Sports. The US Open is one of four golfing majors held every year. It has no home course or club. Dustin Johnson, last year’s champion is highly favored to also win this year’s tilt. The second major golfing tournament of the year is played mid-June with the finals always scheduled on Father’s Day. Catch the US Open, June 16 to 19 on Fox Sports.

There’s more in store for sports fans and fathers this month. Just log on to mysky.com.ph/freeskychannels or call 418 0000 for more information.

The #FREESKYCHANNELS promo is available to all One SKY, SKYcable, and Destiny Cable digital subscribers.