Star Cinema on SKY Pay-Per-View is giving SKY subscribers an offbeat holiday treat as it airs the thriller “Bloody Crayons” coupled with dark indie trilogy “Triptiko” from December 16 to January 5.

Thriller “Bloody Crayons” will get viewers sitting on the edge of their seats as they follow a group of students who find themselves playing a real bloody game as they are picked off one by one by a deranged killer after a game of bloody crayons. As there are only a limited number of people on the island the group must figure out who among them is the killer before he or she gets to all of them. 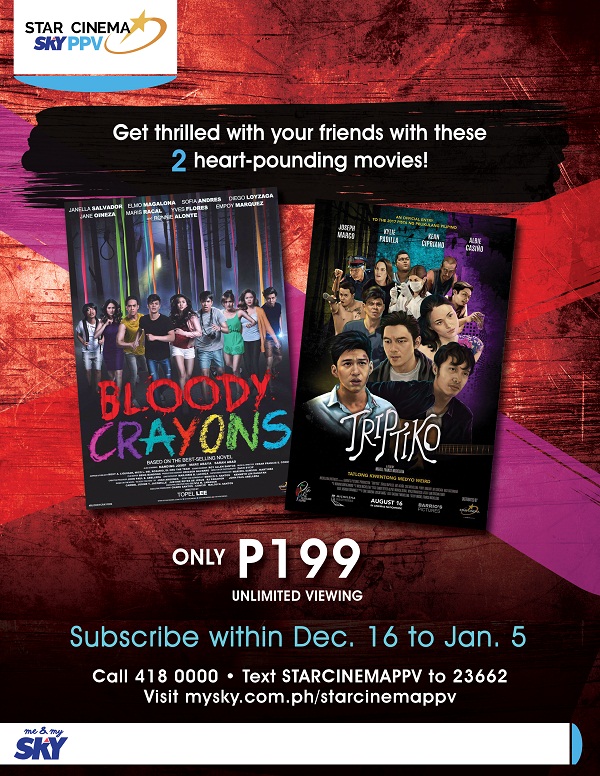 Meanwhile, “Triptiko” brings viewers to three different worlds via three film shorts about the strange turn of events in the lives of their characters. The first, “Swerte,” has Albie Casiño’s fortunes change after a night of “getting lucky.” Next is Joseph Marco’s “Hinog,” where he plays a rising male model who turns to the supernatural after waking up one day with a skin ailment that threatens his career. Meanwhile, Kean Cipriano plays the titular character in the last chapter, “Musikerong John.” John is a folk artist who returns to the stage after two years of absence and recounts his relationship with a woman who wasn’t what he thought she was.

These unique and strange stories will pique viewers’ fascination and will make for an interesting holiday watch.

Subscribe to Star Cinema on SKY PPV from December 16 to January 5 to be able to watch these movies, unlimited and in high-definition.

The offer is available to all One SKY, SKYcable, and Destiny Cable subscribers for P199.

SKYbroadband subscribers can watch via SKY On Demand for the same price.

SKYcable and Destiny Cable subscribers can call 418 0000 or their local SKY office, text STARCINEMAPPV to 23662 or visit www.mysky.com.ph/starcinemappv to subscribe.