According to Billboard PH, four of TJ’s singles have entered at least 5 weeks in the top charts. Recently, “Tulad Mo” from his CD single released in 2015 is sitting atop Billboard Philippines Top 20 at #2. While the song “Dating Tayo” (2016, Self-Titled Album) also entered #6. 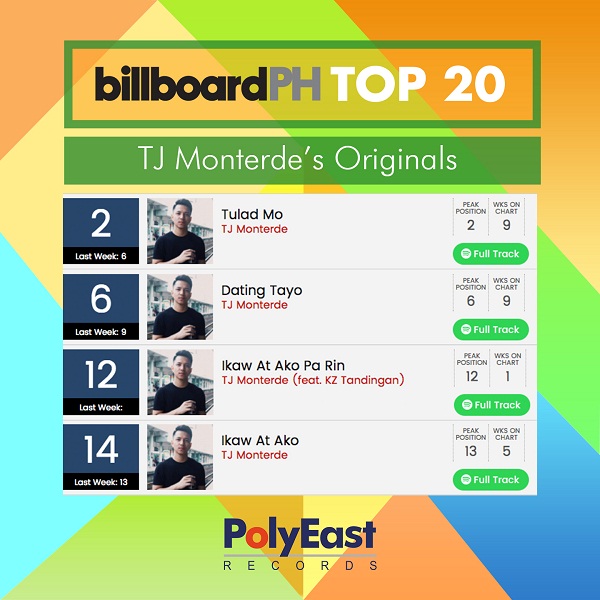 Another hit culled from the 2016 self-titled album is “Ikaw At Ako Pa Rin,” TJ’s duet with soul singer KZ Tandingan is also enjoying its #12 position. Lastly, TJ’s debut single, which led him to his stardom, “Ikaw At Ako” is currently at #14.

With streaming figures being taken into consideration in the charts, TJ is officially the first local artist to gain such recognition from Billboard Philippines. Billboard PH noted on their website that “Data are based on song streams, digital downloads, and video plays. The data sources approved by Billboard US are Apple Music, Spotify, and YouTube.”

Owning 2017 as his moment for success, the singer-songwriter recently concluded a sold-out concert “Ikaw at Ako: The Concert” at the Music Museum as he also launched his third and latest offering “Kahit Kunwari.” TJ’s new album consists of 5 all-original acoustic ballads that kicked off with the latest single “Mahika.”