Village People Coming To Manila For Their 40th Anniversary!

The undisputed Kings of Disco – Village People are coming to Manila to celebrate their 40th Anniversary Tour on Sunday, May 14 at the KIA Theater. Joining them as special guest will be none other than the World’s #1 ABBA Experience – Björn Again. In true Village People style, this one-of-a-kind group, that still comprises two of the original band members, promise to deliver a smorgasbord of smash hits and get everyone up on their feet.

Having sold more than 100 million recordings, Village People were an unstoppable force in the 70’s and 80’s. Their characters and classic hits will forever be ingrained in the fabric of pop culture. Originally formed in 1977 by French Music composer Jacques Morali, the Village People quickly became an instant phenomenon, with chart-topping hits such as “San Francisco,” “Macho Man,” “Y.M.C.A,” “In the Navy,” “Go West,” “Can’t Stop the Music” and more. Their impact and influence on music have earned them the title of “Kings of Disco”as well asa prestigious star on the coveted Hollywood Walk of Fame. The group has won many international awards including the American Music Award for Favorite Musical Group in 1979, AGVA‘s Georgie Award, West Germany‘s Gold Lion Award for music excellence and Brazil’s 1981 Award for Best Act. 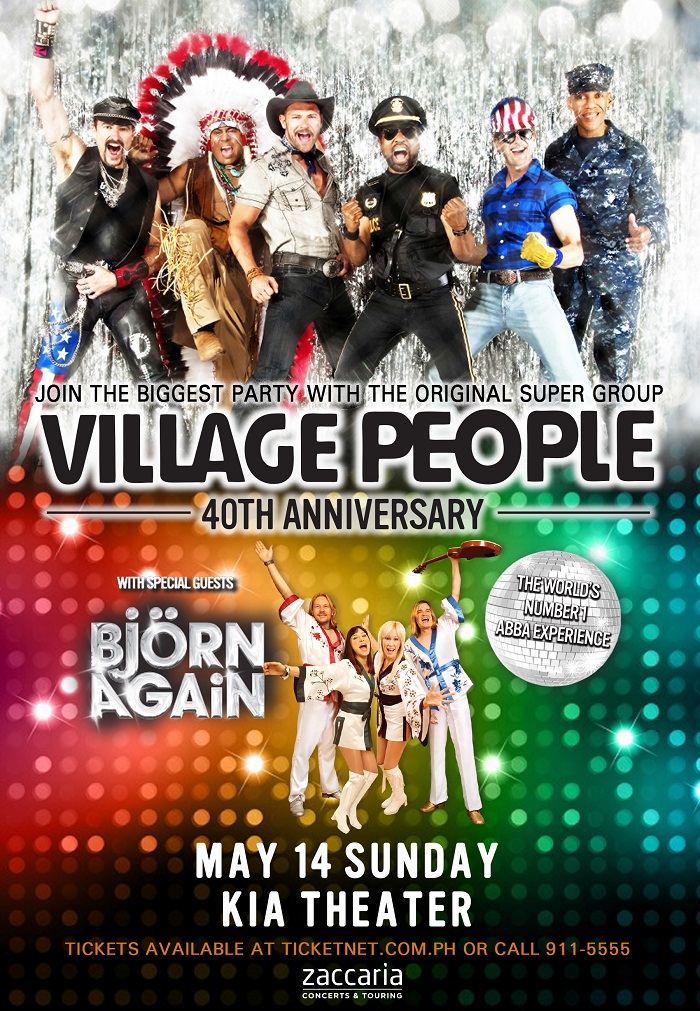 Over the past few years, Village People have performed a full schedule of performances throughout the United States as well as Canada, Brazil, France, South Africa, England, Finland, Belgium, Spain, Italy, Romania, Japan, Mexico, Australia, Poland and much more. The Guinness World Records book certified their Sun Bowl appearance on December 31, 2008 as the world’s largest Y.M.C.A dance with over 40,000 fans doing the “YMCA moves” while the group performed.

Adding to this action packed night of disco fun and supporting Village People across all shows is the world famous tribute band, Björn Again – the only ABBA show endorsed by Benny Andersson and Bjorn Ulvaeus. The group is regarded as the most successful tribute band of all time, having performed in more than 100 countries worldwide and in concert venues from Sydney Opera House to Wembley Stadium. Björn Again will bring ABBA’s timeless hits back to the stage, combined with glitzy 70’s stage costumes, Swenglish banter and hilarious stage antics to create “one of the most entertaining rock shows in the world today”(Time Out, New York).

Catch this special 40th Anniversary Tour that will feature the Village People’s greatest hits and prepare to get carried away with the most irresistible disco tunes performed in this super group’s unique way. Tickets go on-sale on March 15 via TicketNet.com.ph or call 911-5555. Presented by Zaccaria Concerts.