Filipino boxing fans can now rejoice because SKY is going to bring the fight between the People’s Champion, Manny Pacquiao and Australian boxing sensation Jeff Horn on July 2, 9 AM, via SKY Sports Pay-Per-View (PPV).

Sen. Manny Pacquiao (59-6-2, 38 KOs) is all set to return to the boxing ring after a triumphant comeback fight last November 2016 against American Jessie Vargas. The reigning World Boxing Organization Welterweight champion will face Horn (16-0-1, 11 KOs), a former school teacher who has faced-off and won against top caliber opponents in his young career. 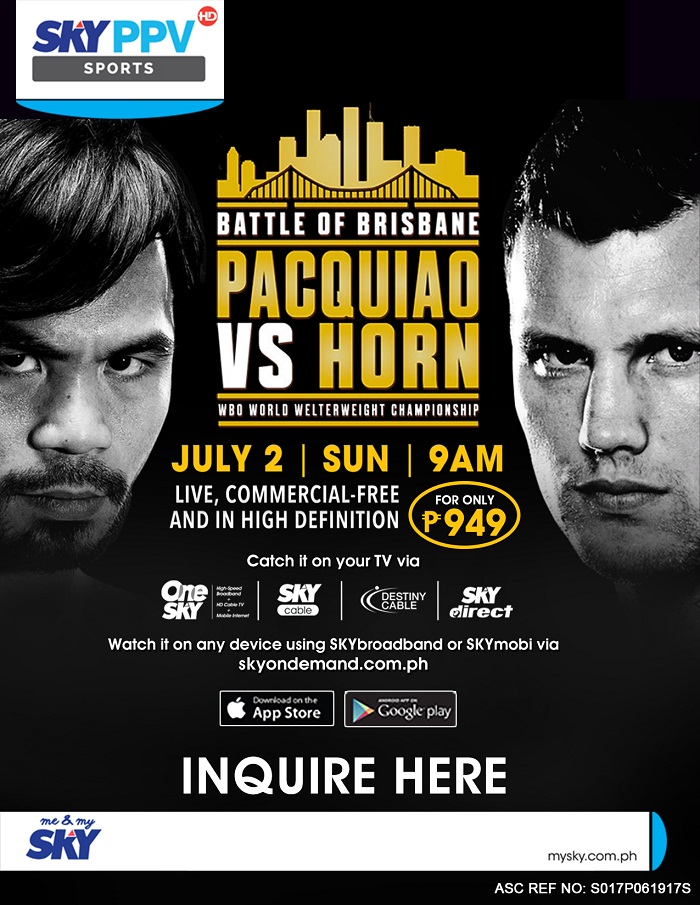 Horn, whose professional boxing career started just five years ago after an appearance at the 2012 Olympics, defeated two former world champions in one year in 2016, finishing Randall Bailey via technical knockout and Ali Funeka via knockout in the sixth round.

Pacquiao, meanwhile, will be entering his 68th fight in 16 years as a professional boxer.

Watch Pacquiao fight for the Filipino people and defend his WBO Welterweight title against Horn live from Brisbane, Australia for only P949. This is available to all ONE SKY, SKYcable, SKYdirect, Destiny, and SKYbroadband subscribers nationwide.

Call 418 0000 or your local office, text PacquiaoPPV to 23662 or visit www.mysky.com/pacquiaoppv to subscribe.