Over 35 of the brightest Kapamilya (family) stars from ABS-CBN, the Philippines’ largest entertainment and media outfit, will come together to bring audiences over four hours of world-class entertainment in ASAP Live in Toronto at the Ricoh Coliseum on July 29, 2017.

While frenzied preparations and huge festivities are brewing across the country in celebration of Canada’s 150th anniversary, the Filipino Canadian community likewise gears up to pay tribute and to celebrate TFC’s 10th year in Canada – a country that has welcomed Filipino immigrants in their midst through the years.

BBC News Chief Correspondent Gavin Hewitt had mentioned in his article “Canada 150: What It Means to be Canadian Today” that “In recent years Canada has undergone immense change. Toronto is now one of the most multicultural cities in the world.”

It is but fitting that the celebration be done in Toronto where the Filipino community comprises 62% of the total (Filipino) population in Canada, making them a significant presence in this bustling and diverse city. 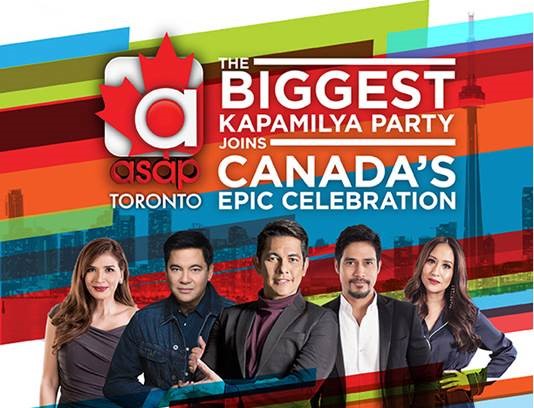 As the growth of the Filipino community in Canada has swelled, TFC has also experienced a boost. TFC Canada Country Manager Jun Del Rosario says that TFC “eventually became one of the most watched multicultural channel on cable TV. This allowed us to expand our services (remittance, cargo) and provide the market with more entertainment options (theatrical, events).” This phenomenal growth is one of the reasons why TFC can bring huge events like ASAP Live in Toronto.

ABS-CBN Global Head of Events Ricky Resurreccion underlines this mutually beneficial coexistence when he states, “for so many years, Filipinos have become a positive contributor to the rich and diverse tapestry of Canada. And what better way to celebrate our community’s contribution to the country’s 150th anniversary than by bringing the premier party celebration TFC and ABS-CBN has to offer – ASAP.” The merriment is doubly meaningful because as Resurreccion adds, “As we celebrate TFC’s 10th birthday in Canada, let this also be our gift to our loyal Kapamilyas in the True North.”

ASAP Live in Toronto promises to be one legendary party as the merrymaking starts as early as 11:00 A.M. Kapamilya fans and ASAP ticketholders are encouraged to drop by the Heritage court, Enercare Centre for fun activities like photo booth, Filipino street games, sing and dance at the TFC Summer Station ID video booth, Pinoy food, and many more games and prizes.

Viewers are encouraged to take their ASAP experience to the next level. Download the TFC Live Events App for more chances to win fantastic prizes like official concert merchandise, Meet & Greet with the Stars, or even a backstage pass. Go to www.tfc-ca.com/asaptoronto/ for instructions on how to download your free TFC Live Events App.

In true Kapamilya (family) fashion, this back-to-back celebration of Canada 150 and TFC’s 10th in Canada will be one for the books. As Del Rosario mentioned, “I believe that TFC started in the role of a bridge. One that connected the Fil-Canadians to the homeland. However, I would like to see that role evolve into one of an advocate and a champion of the Fil-Canadian.” This epic event is another glowing proof that TFC upholds the Fil-Canadian.

Be there on July 29th at the Ricoh Coliseum for ASAP Live in Toronto. Get your tickets now via www.ticketmaster.ca; through a TFC agent near you; or call 1-855-TFC-CNDA.