Pinoy fans of the hitmaking British-Norwegian band a1 are in for a treat this 2018 – after 15 long years, the four original members of the band will reunite for their 20th Anniversary Reunion Tour in Manila.

Due to overwhelming demand, a1 and Concert Republic officially announce that the highly anticipated concert will happen not just once but 3 times in the Philippines (2 shows in Manila and 1 in Cebu). 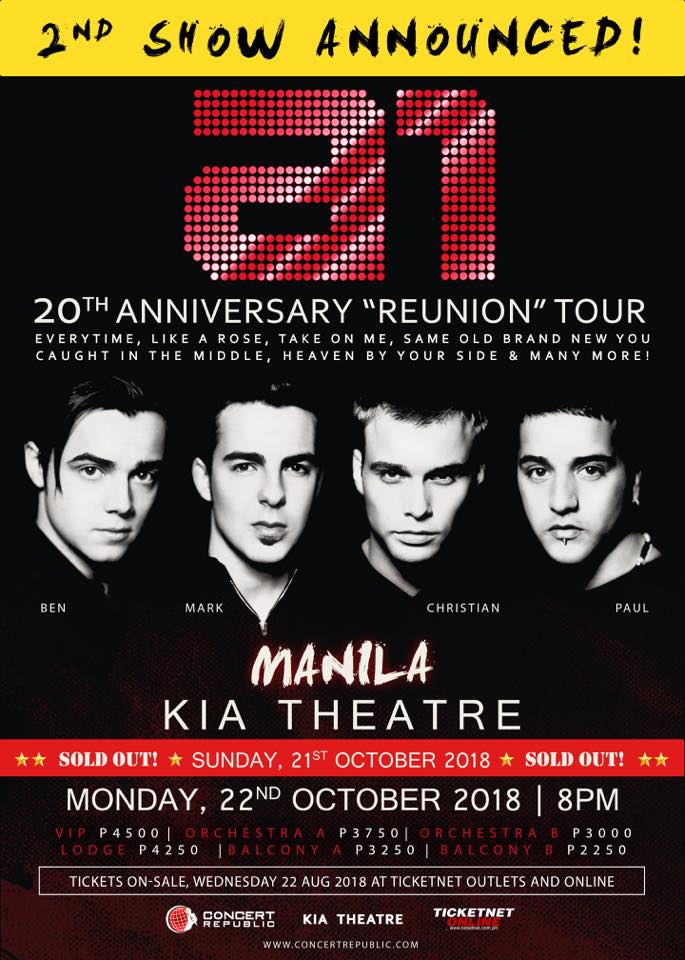 A1’s fans in Manila are given the second chance to catch their fave Boyband as a second show is added on October 22, 2018 at the KIA Theatre. Their first show which is slated on October 21 was immediately sold out after it was announced.

The band, composed of members Ben Adams, Mark Read, Paul Marazzi and Christian Ingebrigtsen first formed in 1998 with their debut single “Be The First to Believe,” leading them to achieve worldwide success through the late 1990s and early 2000s, especially in Southeast Asia.

Their massive successes includes winning the BRIT Award for “British Breakthrough Act” in 2001, followed by the release of hit songs such as “Like A Rose,” “Caught In The Middle,” “Same Old Brand New You,” their rendition of A-Ha’s “Take On Me,” “Everytime,” among many other tunes that have reached number 1 and entered Top 10 charts internationally.

Though the quartet split up following the exit of Marazzi in 2002, Ingrebrigsten, Read, and Adams decided to reform A1 as a trio in a series of concerts held in Norway. Since their return, they have released new singles, along with their fourth and fifth studio albums, Waiting for Daylight (2010) and Rediscovered (2012). The band has since enjoyed a huge resurgence of interest and demand internationally, as they bring a mixture of old hits and new songs, playing sold out stadium shows in Scandinavia and across Asia.

As they approach the 20th Anniversary of their debut single and album, the remaining members of the original band are ecstatic to welcome back Marazzi for their Anniversary Tour over 15 years after his exit. The quartet will revisit beloved Southeast Asian countries for this tour, which includes shows in Manila on October 21 and 22 at the Kia Theater and in Cebu on October 25 at the Waterfront Hotel and Casino.

Talking about this much-awaited reunion tour, Ben, Christian and Mark say “We’re unbelievably excited that Paul will be joining us again and bringing the original line up of A1 together for the very first time in more than 15 years.

There was always an amazing dynamic and energy when the four of us performed together. So, what better place to bring that magic back than to the part of the world that has always embraced us with such incredible love and support, South East Asia, more specifically, the Philippines, Indonesia & Singapore. We absolutely cannot wait to see our friends and fans over there once again and bring them a show that will remind us of all the great times we had together. It will surely be a show to remember and not to be missed.”

In addition, returning member Paul is honored to be joining the Southeast Asian tour: “This time 20 years ago I was just starting out on an amazing journey that would take me to all 4 corners of the earth. I was lucky enough to see some amazing places and meet some very kind and wonderful people too. I can’t think of anywhere better to continue this journey once again than South East Asia, and what better company than my old friends Mark, Ben and Christian. I have so many fond memories of my time there and feel so privileged to be able to visit once again.”

With massive number 1 hits and five studio albums under their belt, along with over 10 million records sold worldwide, A1 will surely give their Pinoy fans of all ages the once in a lifetime chance of seeing their idols back together on stage.

Ticket sales for the second show at the Kia Theatre will start on Wednesday, August 22, 9 am onwards at TicketNet outlets and online. Interested concert goers may also call 911 5555 for inquiries.

Tickets for the October 25 show at the Waterfront Hotel and Casino in Cebu are still on sale at all SM Tickets outlets and online.

A1 20th Anniversary and Reunion Tour is presented by Concert Republic.

Team Orange 26 Feb 2021 0 comments
Grocery shopping can sometimes be a stressful chore. Buyers face the challenge of picking healthy and fresh alternatives, while looking for good deals and sticking to a budget. But with…