“ASAP Live In Sydney” Leveled Up With The Addition Of Enrique Gil, Liza Soberano, and Regine Velasquez-Alcasid! 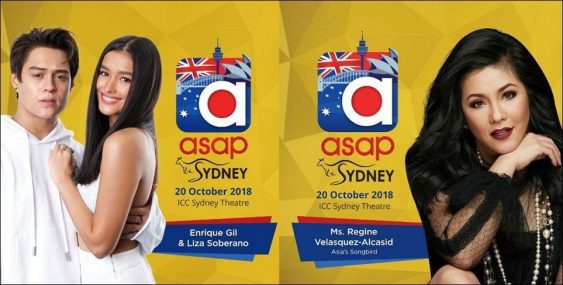 Fresh from the giant success that was “ASAP Live in Honolulu” back in June this year, ABS-CBN’s longest-running variety show, and global touring musical juggernaut goes to the Land Down Under for the live performance spectacle called, “ASAP Live in Sydney”. ABS-CBN and TFC Live bring the biggest Filipino show ever to over 304,000 Filipino and Filipino-Australians, and also to the region’s larger multicultural audience, on October 20, 2018, Saturday, at the world-renowned ICC Sydney Theatre.

Just last weekend, ABS-CBN Australia announced that on top of the already confirmed star-studded cast, “ASAP Live in Sydney” even leveled up with the addition of the wildly popular Enrique Gil and Liza Soberano, known as the reel and real love team, “LizQuen”, and the historic first-ever ASAP Live special guest stint of Asia’s Songbird, Regine Velasquez-Alcasid, the current best-selling OPM artist of all time. She will join husband and ASAP mainstay Ogie Alcasid and the ASAP team for a guaranteed one-of-a-kind-show in Sydney. 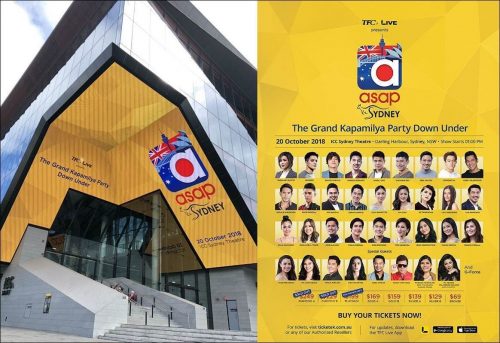 “The entire community here is excited and at the same time ready to represent at ‘ASAP Live in Sydney’”, said ABS-CBN Australia Country Manager Jay Santos. “It is going to be an amazing time and experience for us in Australia, particularly in the state of New South Wales where most of the Filipinos in the country live. With ‘ASAP Live in Sydney’, Filipinos are celebrating their presence and injecting their unique, delightful cultural flavors that add to Sydney becoming a must-visit destination city at this time of the year.”

The ICC Sydney Theatre is the latest among the world-class venues that ASAP Live is performing, after sold-out shows in Singapore, Dubai, Los Angeles, London, New York, Toronto, and Honolulu. It is part of the new $1.5-billion International Convention Centre Sydney complex, Australia’s first and largest fully integrated convention, exhibition and entertainment center. It is a monster technology job: it has 1,000 access points plumbed into a 10Gbit network. So, forget about wi-fi issues; the complex IS connected. Moreover, inside the theatre, every one of the venue’s seats is focused on the center of the stage, and a fan-shaped vertical seating layout ensures an optimal view from every seat in the house.

Moreover, ICC Sydney Theatre is in the heart of Darling Harbour, a splendid waterside location in Sydney which ticks off all the destination boxes: marvelous aquarium and zoo, great dining options, funky nightclubs, wine bars, bistros, shopping centers, ferries and cruises, the world’s largest cinema screen, laser skirmish and tenpin bowling, museums and parks, among a rich buffet of attractions.

And “ASAP Live in Sydney” will surely be among the area’s world-class entertainment offerings this October.

For the event day schedule, to check updates and to buy tickets now to “ASAP Live in Sydney”, download the TFC Live App from the App Store or Google Play and register.