Reporter Camille Preaker returns to her small hometown to cover the murder of one preteen girl and the abduction of another. Trying to put together a psychological puzzle from her past, she finds herself identifying with the young victims a bit too closely. 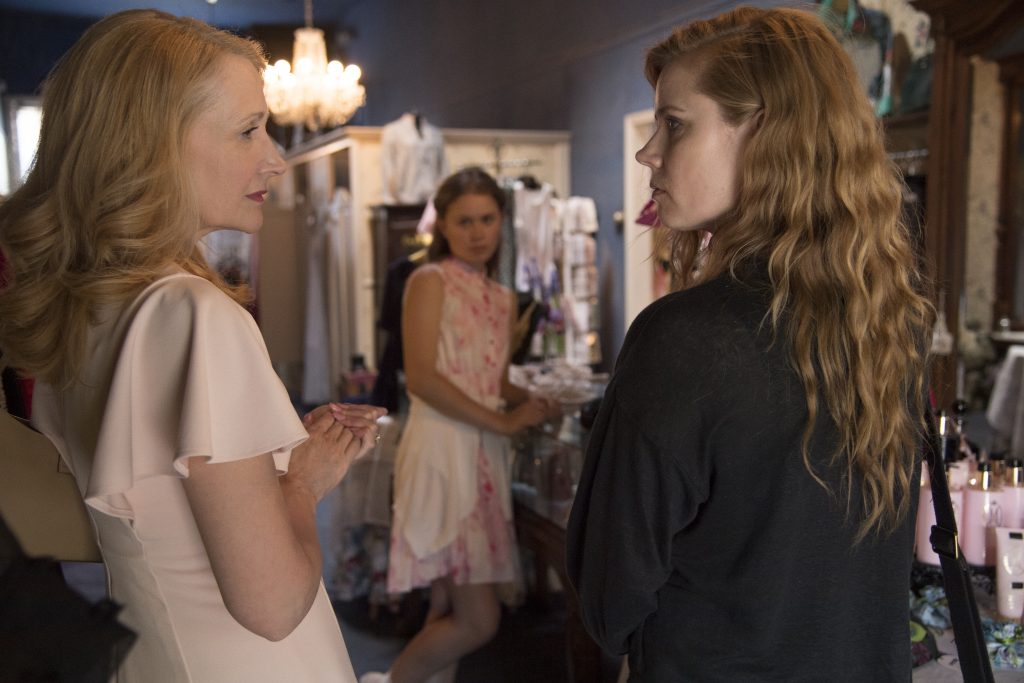 Starring five-time Academy Award®-nominee Amy Adams (“Arrival,” “Nocturnal Animals”), SHARP OBJECTS debuts same time as the U.S. on Monday, July 9 at 9am on HBO GO and HBO. New episodes premiere every Monday at the same time and repeat on the same day at 10pm on HBO. Catch up on past episodes anytime on HBO GO.

SHARP OBJECTS was filmed in Los Angeles and Northern California, and in and around Atlanta.

“‘Sharp Objects’ is my first child, my first novel,” says author Gillian Flynn. “I wrote it nights and weekends and holidays with no real belief it would ever be published, because I felt like I had to bring this girl to life, so it holds a sacred place with me. It’s a strange and thrilling thing, bringing text to screen, allowing it to become a new thing while honouring readers’ interpretations too — it’s fun and a bit scary.”

“This was my first novel, yet the last to reach screen — 12 long and often disappointing years. But then Amy came along, and I thought, ‘Oh, that was it! Camille was waiting for Amy to play her.’ And that’s not lofty, writer talk. I really believe Camille needed Amy.”

Says director Jean-Marc Vallée, “It’s curious how we can find beauty in places we wouldn’t expect. How darkness sometimes can become attractive, comforting. This is what happened to me when I read Gillian’s novel. I got sucked into Camille’s head. I was falling for this character. Never met, never seen, nor heard anyone like this before.”

“I was fascinated by her obsession with words, the way she uses them to define herself, to heal and to harm, and her way of describing the world, her way of talking about herself, her wounds and imperfections. What a unique voice, so raw, so dark, and yet so honest and vulnerable. That is Camille Preaker’s beauty, and Amy Adams.’ I feel grateful and fortunate to have witnessed the spectacular work of an actress who dared to play in the dark, with no safety net.”

Observes creator and showrunner Marti Noxon, “When I first read this book, I remember thinking to myself, ‘I have to meet Gillian Flynn – she’s really screwed up like I am.’ This is a story that speaks to a part of women’s lives that we rarely address: our impulse to hurt ourselves and each other. And I feel like Camille is representative of so many women who have continually suppressed the damage that has been done to them throughout their lives, and how in an effort to avoid dealing with the root of our issues we inflict pain onto ourselves, in various forms.”

“It’s something I could personally relate to, and to see this character who is deeply flawed, but still incredibly brave in her search for the truth, was part of why this story stayed with me for so long after reading it – and it was that lingering hold that made me want to adapt it into a series.”

Says Blumhouse founder Jason Blum, “Blumhouse president Charles Layton brought me ‘Sharp Objects’ almost six years ago, before Gillian Flynn was Gillian Flynn. I am so proud that, together, we optioned this riveting book that has now been brought to life by an astonishingly talented filmmaking team.”

Camille Preaker (Amy Adams), a St. Louis newspaper reporter sent on assignment to Wind Gap, her quaint Missouri hometown, to cover the gruesome murder of one preteen girl and the disappearance of another.

Adora Crellin (Patricia Clarkson), Camille’s mother and queen of Wind Gap’s high society, who has her serene, picture-perfect life threatened by the unexpected return of her estranged daughter.

Richard Willis (Chris Messina), a detective brought in from Kansas City to support Wind Gap’s sheriff in the search for the killer of a young girl. He joins forces with Camille to try to solve the mystery.

Amma (Eliza Scanlen), Camille’s 15-year-old half-sister, living a double life as a restrained and girlish daughter at home with her parents, and as a brash, impetuous teenager when out with friends.

Jackie (Elizabeth Perkins), the local gossip and renowned alcoholic. Trashy, fun and larger than life, she knows she’s a “backwoods Barbie” and has a sense of humour about it.

Vickery (Matt Craven), the frustrated small-town police chief, trying to preserve the reputation of Wind Gap by keeping a lid on the possibility that a serial killer might live among them.

John Keene (Taylor John Smith), moody and sombre since the murder of his 13-year-old sister. His sensitive, temperamental nature raises eyebrows and makes him a prime suspect in the murder investigation.

Curry (Miguel Sandoval), Camille’s caring and supportive newspaper editor, who sends her on assignment to her home town.

Young Camille (Sophia Lillis), a 14-year-old tomboy who is devoted to her younger sister, Marian.

Camille Preaker (Amy Adams), a reporter for the St. Louis Chronicle, is sent to her rural hometown of Wind Gap by her editor, Curry (Miguel Sandoval), to file a story about two missing girls, one of whom was found dead and presumed murdered. The assignment, which reunites Camille with her overbearing mother, Adora (Patricia Clarkson), stepfather, Alan Crellin (Henry Czerny), and half-sister, Amma (Eliza Scanlen), brings back traumatic childhood memories, including the death of Camille’s younger sister, Marian (Lulu Wilson), when both were schoolgirls. Tormented by her past and seeking refuge through alcohol, Camille joins Detective Richard Willis (Chris Messina) and Chief of Police Vickery (Matt Craven) in following leads around town that might shed light on the fate of the most recent missing girl.

Camille (Amy Adams) searches for clues at the funeral and wake for Wind Gap’s latest victim, and clashes with her mother (Patricia Clarkson) over Camille’s presence in the town. Richard (Chris Messina) finds a surprising way to arrive at a conclusion about the murderer’s profile. Camille pays a visit to the working-class home of a young boy (Matty Evers) who says he witnessed the abduction, and confronts Chief Vickery (Matt Craven) about why he ignored the boy’s claim.

Camille (Amy Adams) relives a recent tragedy as she struggles to piece together the murders in Wind Gap. Richard (Chris Messina) grows frustrated with Chief Vickery’s (Matt Craven) assumptions regarding potential suspects. A defiant Amma (Eliza Scanlen) shows off her wild side to Camille, while Adora (Patricia Clarkson) admonishes Camille for meddling in the investigation and a town in mourning.