Starting this July, the show will look back at its humble beginnings and its 39-year journey that made it a staple lunchtime companion to millions of Filipinos worldwide.

Eat Bulaga’s SVP for Creatives and Operations Jeny Ferre said it’s going to be a simple, nostalgic and heartwarming celebration as they prepare for Eat Bulaga version 4.0. 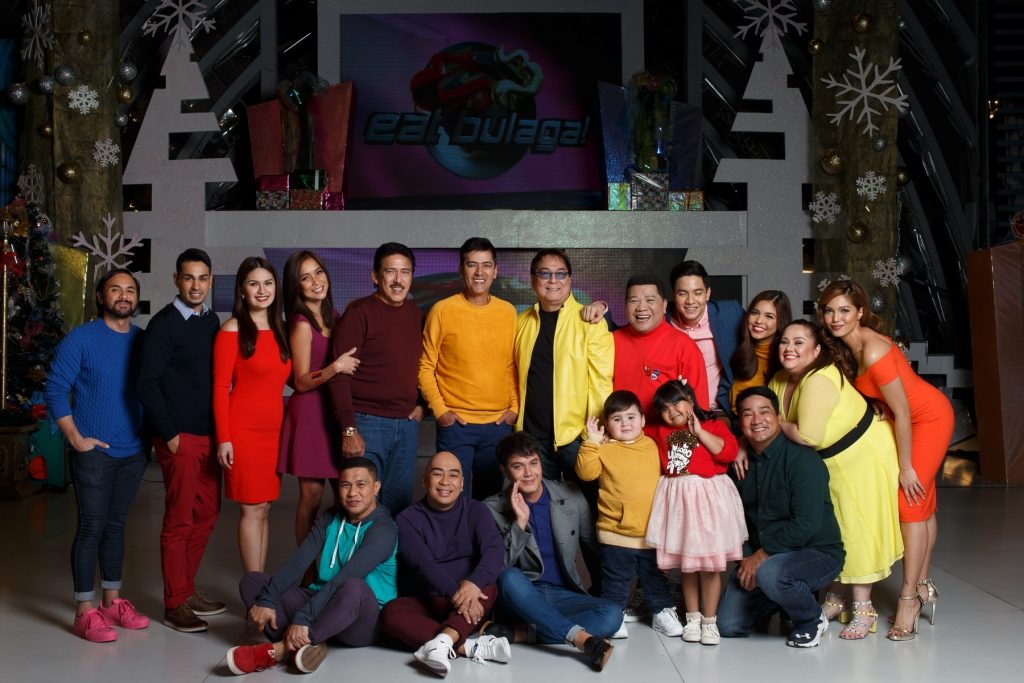 “We are constantly reminded of the unforgettable and historic journey of Eat Bulaga. And as much as we would like to reminisce about the past, we are now looking forward to exciting times ahead. We always hear the phrase ‘life begins at 40,’ and we feel the same way. We are excited to present the ‘forty-fied’ version of the show every Filipino grew to love,” she said.

Launched on July 30, 1979, Eat Bulaga is a brainchild of Television and Production Exponents, Incorporated (TAPE) boss Antonio Tuviera. He tapped brothers Tito and Vic Sotto with comedian Joey de Leon to headline the show aimed to rival then number one program “Student Canteen“.

Throughout the years, the formidable trio, with the help of numerous co-hosts, stayed true to its promise of providing “isang libo’t isang tuwa” to television viewers through its more than 300 segments, including the well-loved “Pinoy Henyo,” “Super Sireyna,” “Bulagaan,” and “Juan for All, All for Juan“.

Ferre, who has been working with the show for more than 20 years, said there’s no pattern or secret formula to Eat Bulaga’s success. She said it all boils down to love for work and continuously evolving as a team.

“I think when you love what you do, you love the people you work with, and you love the industry you are in, then success will follow. It’s not every day that you get to make someone laugh or to change someone’s life, so we value what we do.”

She also said that work gets easier because Eat Bulaga is like a family. “We are a small group but we respect each other. We don’t see this as work but as extension of our homes which we share to millions of Dabarkads around the world. Like in every family, we go through happy and challenging moments, but we are always together. We will fight as one — that’s the culture we have here.”

Ferre also assures everyone that even though they’ve been on-air for four decades, Eat Bulaga family still has the same dedication, hunger and passion to bring quality programming to all.

She said they are more challenged to come up with bigger and better segments.

“We don’t rest on our laurels. Our advantage is our experience that will back us up because we’ve been through so many challenges and I’m proud to say that we emerged stronger and better. We are more challenged now more than even to be attuned with the time, to keep on changing, to be flexible, and to be able to adapt to the ever changing world of television. We need to innovate and to remain trendsetters.”

Aside from being leaders in this format and timeslot, Eat Bulaga now enters a new period in its history — adapting to the digital age.

For some time now, all daily episodes of the show were made accessible on its official YouTube channel while overseas viewers can regularly watch the live broadcast through its online streaming.

Eat Bulaga also started producing contents that are only available for netizens. Its first effort is “Eat Bulaga Behind the Scenes” where one host gets to do the job of someone from the production team, be it as a production assistant, floor director, researcher, social media manager or writer.

“We are extending Eat Bulaga to the interwebs. It is the same kind of fun, same kind of entertainment, same kind of excitement but we are no longer up to 2:30 p.m. The vision is to make the show 24/7 for people online. You can check videos and watch our episodes anywhere and anytime you want,” Ferre said.

As to what’s in store for loyal Dabarkads now that they are gearing up for Eat Bulaga version 4.0, the creative head said expect four times the fun, laughter and entertainment. They will also continue to be of service to every Filipino household.

“For me personally, it feels like we are starting again because we have new challenges to overcome. We still have that same attitude when Eat Bulaga started 39 years ago. We are guided by the knowledge and experiences we gained in the past four decades to create a bigger and better Eat Bulaga. We are all looking forward to turning 40.”