Family With Lustrous Image But Dim Relationship In “Kadenang Ginto” 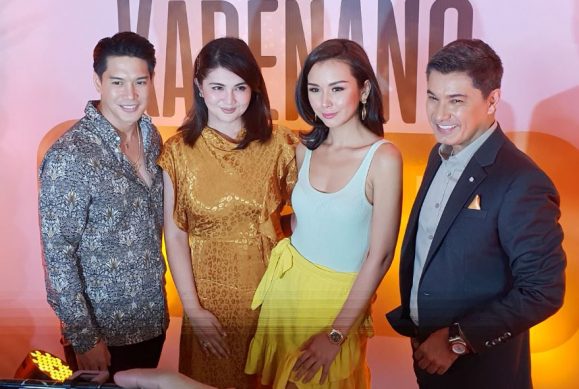 ABS-CBN offers another compelling story about a family that glimmers with love but tainted by hatred in its newest series “Kadenang Ginto,” seen outside the Philippines via The Filipino Channel (TFC), with its pilot episode streaming in most countries worldwide via TFC Online (www.TFC.TV) on October 8.

Get to know Romina (Beauty Gonzalez), a loving daughter who strives to give comfort to her family, especially to her mother. Aside from her family, she also finds happiness from her boyfriend Carlos (Adrian Alandy). They will pursue their dreams together, and eventually decide to get married.

However, a day before their wedding, Romina gets raped by an unknown man–a crime that will change her life forever. In disbelief of her girlfriend’s testimony, Carlos will break up with Romina and blame her for her unfortunate fate. But another news will shock her–she is pregnant and the child she carries is the result of the horrific act done to her.

In her moment of despair, she will find refuge inRobert (Albert Martinez), the owner of the company where she works. They will eventually become lovers, but Robert’s daughter Daniela (Dimples Romana) will get in their way and do everything to tear them apart. Mean and conceited, Daniela will treat Romina unfairly and accuse her of being a gold digger.

Their conflict will push Daniela to run away and live on her own. But she will return as Carlos’ wife, and will bring with them their daughter Margaret (Andrea Brillantes).

Daniela and her family’s return will also mark her quest to get the whole share from her father’s inheritance. But this will not be made easy by Rominaand her daughter Cassandra (Francine Diaz), who is now a legal child of Robert. This will deepen their rivalry for the love of Robert and their right as the true heirs as they decide to live under one roof.

Daniela and Romina’s rivalry will seem to be reflected by their daughters Margaret and Cassandra. Margaretwill grow up rebellious and used to getting everything she wants. On the other hand, Cassandra was raised to be kind, compassionate and respectful.

As they live under one roof, Margaret gets increasingly jealous of Cassandra and does everything to win the love and attention of Robert, Margaret’s grandfather and Cassandra’s adoptive father.

The two young actress joining the new ABS-CBN series has poised their acting chops at an early age. Brilliantes was just 10 years old when she headlined her own teleserye, “Annaliza,” which showcased her potential as a drama actress. She was dubbed as Teleserye Princess (TV series Princess) and won the Best Child Performer Award at the PMPC Star Awards for Television in 2013.

On the other hand, Diaz is new in the industry and impressed everyone when she portrayed the young Erich Gonzales in “Be My Lady” in 2016, and young Kim Chiu in “Ikaw Lamang ang Iibigin” in 2017.

Can their golden hearts still return to their gleaming glow now that they are dimmed by anger?

Don’t miss the drama in “Kadenang Ginto” seen outside the Philippines via TFC, with its pilot episode streaming in most countries worldwide via TFC Online (www.TFC.tv) on October 8 at 3:45 P.M. (Manila time).

Catch-up episodes will be available in most countries worldwide via TFC Online (www.TFC.tv) and TFC IPTV.